November 2, 2011
While the economy may be the prime issue at the moment, the interplay between religious and social attitudes will always be nearby. A case in point is the current situation involving Denver Broncos quarterback Tim Tebow, the outstanding college football player who has become a pawn in a far greater battle than that waged on any football field. 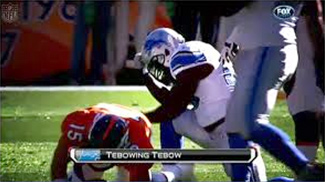 The son of a pastor and a mother whose choice to avoid abortion despite the advice of doctors became the subject of a controversial Super Bowl commercial, Tim Tebow's background reads like the Left's worst nightmare. This homeschooled virgin who has publicly stated that he is saving himself for marriage and proudly professes his devotion to Jesus Christ and very publicly wears his Christian faith on his sleeve represents all that is repugnant to the secular left about Christianity and those who profess it. He is a walking slogan against abortion and promiscuity and in favor of prayer and outspoken Christianity. The fact that Tebow displays his faith in front of this society's face and not in that face means little to those who find any public display of Christianity revolting.

Surrounded by controversy by merely being open and proud about his faith, this fine young man seems to inspire more hatred, criticism, and ridicule with every step he takes. Some will argue that this is simply about Tebow's spectacular drop from outstanding college football player to very unimpressive pro football status. However, Tim Tebow is not the first and will certainly not be the last Heisman Trophy winner to fall on his NFL face despite lugging around loads of national awards for collegiate and amateur sport greatness. Andre Ware, Steve Spurrier, Gary Beban, Matt Leinart, Brady Quinn, and Carson Palmer are similar examples of college success who did not exactly turn the NFL on its head. No, there is something more at play here than taking easy shots at a college golden boy who may turn out to be much less on the NFL level.

Even football analysts such as Boomer Esiason and Mike Francesa, who both readily admit that Tebow's football limitations can be breathtaking and may prove terminal to his NFL career, wince at the vicious vim and vigor with which opponents delight in mocking, criticizing and targeting him. Despite the fact that scores of writers can find nothing to hate about Tim Tebow and, on the contrary, much to like, the fact remains that he represents something many people despise. When he succeeds, as he did spectacularly in leading an amazing comeback against the Dolphins, his prayerful kneeling gesture and audacity to thank his Lord and Savior Jesus Christ is arrogant, presumptuous, and patronizing holier-than-thou behavior. When he fails, as he did spectacularly in getting pummeled by the Detroit Lions one week later, he is described as an embarrassing joke. The fact that Tebow remains peacefully content to work hard and exude his faith and does not engage in the storms swirling around him only adds to the ironic absurdity of the situation.

Somewhere along the line, this stopped being about Tim Tebow and became about the integrity, viability, and relevance of Christianity. Ridiculous as it may sound, combatants on both sides of this debate pretend that every touchdown, fumble, interception, and sac is a referendum on whether Christianity matters or should just go away. Obviously, such a view is an insult to Christianity, to Tim Tebow, and to basic common sense and intelligence, but that never stopped any fervent follower of any belief from diving head-first into the absurd. At the end of the day, Tim Tebow represents nothing but a decent, outstanding, strangely talented yet sorely limited display of the yawning gap between collegiate and NFL football success. Whatever insult, injury, or grave offense others may experience from his impressive pride in publicly displaying his faith is their problem and not his, much less any indictment on a faith which has transformed and shaped the world despite denials by insolent fools, delusional dimwits, and hypocritically selective secularists and liberals.

At the heart of this mocking attack on Tebow and what he represents is the practice of "Tebowing" , which is basically mocking his public, genuflecting gesture of prayer. That is what Lions linebacker Stephen Tulloch did by striking said pose near a crumbled Tebow after a sac. Tulloch later claimed his act was not intended as a disrespect to Tebow, and was all in "fun." One wonders, however, if Tulloch would so publicly and blatantly mock the Moslem faith by striking a similarly ridiculing imitation of prayer in that faith. Francesa argues that such mockery of a player's faith is uncalled for, and Esiason worries about the fact that opponents are clearly "out to get" Tebow. From Esiason's perspective, the deer is squarely in the headlights, but the car is intentionally accelerating toward its helpless target with a terrifying vigor.

Christ warned His followers that they would be hated, mocked, and attacked for openly honoring and following Him. We are told that his enemies beat Him and nailed Him to the cross with extreme vigor and relished ridiculing and humiliating Him. Even the most peaceful and kind Christian will inspire intense hatred for merely daring to be Christian proudly and openly, and Tebow is certainly no exception.

It is the height of irony that this fine athlete who donated his 2.5 million signing bonus to provide food, education, and housing for the poor would be called "embarrassing" by players in a league brimming with spousal and animal abusers, irresponsible fathers of illegitimate children, and violent offenders. It is the height of irony that Tebow would be seen as a clueless joke by players on a Lions team which has been a clueless joke for decades until its current resurgence. In a society where rapists, murderers, and thieves are defended as victims, we see a fine example of dedication, hard work, deep faith, and an excellent upbringing being torn apart by those too insecure to avoid feeling threatened by everything this young man represents.

Some writers have argued that Tebow's supporters need to lighten up, that he opens himself up to such public ridicule by his equally public display of faith, that pro football is a mean game with little room for sensitive types or peace-loving fans. However, we see equally public displays of faith by other religions which are not met by such public mockery. We see all sorts of behavior being rationalized and even defended in the name of freedom or so-called progressive thinking. Make no mistake about it; this is merely another open, blatant disrespect of all things Christian and of those guilty of openly and proudly professing it. Such disrespect can only occur in a society which follows the lead of its leaders, whether they fiddle amid the flames they have started or publicly reject a faith which formed the cornerstone of this great nation. Once again we see lions trampling a Christian to the delight of a cheering audience. If this game had somehow been played in the Los Angeles Coliseum, the imagery and symbolism would have truly been complete.