Gabriel Garnica
If Obama wants answers from anyone, he should start providing some of his own

July 14, 2012
You know those slapstick scenes where someone is drinking water and overhears or is told something that so shocks them as to cause them to spray the room and those in their immediate vicinity? Consider yourself sprayed. I almost choked when I read that, lo and behold, Obama wants answers from Romney on Bain Capital. This coming from someone whose entire administration is a litany of unanswered questions and evasions about everything from his actual attendance time at Columbia, to his time at Harvard, to his birth records, to the Obama's wasteful travel whims on public dime, and on and on such that there is even a website listing his lies and a second website with more detailed reviews of his fibs. In fact, Obama's lies are so prevalent and widespread that the New York Times, which never met a fact it cannot manipulate left, has chosen to bury them somewhere rather than even try to ignore them or pretend that they do not exist. 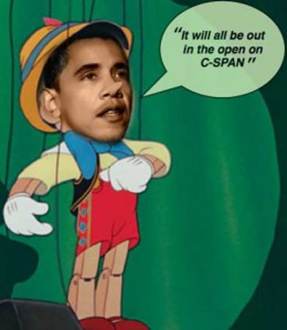 One would think that transparency and honesty are the last places Barack Obama would want to rent a room in since he is seemingly on the path to making Bill Clinton look like Honest Abe. However, it is becoming abundantly and undeniably clear that Barack Obama's books, the authorship of which are yet more items on Obama's growing list of questionable claims, each had one thing dead on, and that was their respective titles. Dreams From My Father and Audacity of Hope remind us that Barack Obama has become the father of dreams posing as reality and he has the audacity to hope that enough voters will buy those counterfeit facts.

The fact is, when one considers the totality of Barack Obama's political career and his time in The White House, one realizes that his entire presence on the public stage is one big unanswered question. Having someone with such questionable honesty and transparency credentials demanding that an opponent provide answers is like having the aforementioned Bill Clinton demand that George Bush prove marital fidelity, and that is no lie.