Big government as the defining political issue of the age 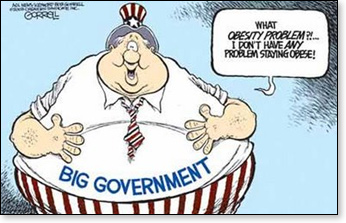 The term "big government" gets volleyed continually over the net of political dialogue. It generally relates to debates over the public budget and deficit, but it involves much more. It has become the defining issue distinguishing the two parties and the two political ideologies. Unfortunately, the conservative case against big government all too often focuses only on the monetary aspect.

Statism as the distinguishing trait of liberalism

Even as political partisanship intensifies, there is great uncertainty as to the defining ideological difference between Democrats and Republicans, liberals and conservatives. Liberals often claim to be the defenders of individual rights, yet in recent years, it has been the Democrats who have attempted to restrict religious expression and political speech. Liberals have long claimed to be the opponents of monopolization and the defenders of small, independent business. Yet it is the Democrats who have become the favorites of Wall Street political donors and whose extensive regulatory schemes have favored the wealth and power of big business over small and independent businesses. Liberals proclaim a dedication to democratic processes and integrity, even though they oppose voter identification laws that combat electoral fraud and reform of public sector unions that exert a distorting influence on the democratic process.

But the one liberal cause that has remained steadfast is the cause of big government. Indeed, an unmitigated commitment to more expansive government amounts to the one unifying core belief spanning the spectrum of liberal interest groups. The pursuit of big government is the single fundamental goal that best explains the political positions and strategies of the Left.

The growth of government as the root liberal belief

American liberalism has undergone significant transformations over the past sixty years. Indeed, the liberalism of Harry Truman and John F. Kennedy and Sam Rayburn is not the liberalism of Barack Obama and Nancy Pelosi. Given the transformative evolution of liberalism, particularly as a result of its interest-group orientation, it can be difficult to discern the fundamental basis or unifying principle of modern liberalism.

Liberals have long claimed to be the champions of the working class, but that claim seems questionable with President Obama's assertion that the private sector, which creates the majority of jobs in this country, is "doing fine" and doesn't need help. Indeed, by keeping corporate tax rates higher than much of the rest of the world, and by instituting reams of expensive and confusing new regulations (such as the 2300-page Dodd-Frank bill, which will, according to former chairman of the FDIC William Isaac, result in the closing of thousands of small community financial institutions), the Obama administration is virtually guaranteeing that the private sector will not be creating many new jobs. On the other hand, Democrats take a much more aggressive approach when dealing with government jobs, as was demonstrated in the virulence of their opposition to Wisconsin Governor Scott Walker's attempt to regulate the collective bargaining rights of public sector unions. To liberals, a public sector worker is so much more valued than a private sector worker — because the more public sector workers there are, the bigger government is. 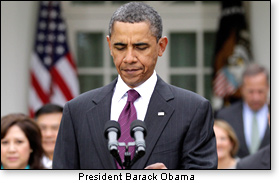 The Left preaches a belief in the rule of law, but this belief was contradicted by the constitutional dubiousness of President Obama's recess appointments. It was also contradicted by the Obama administration's decision to cease enforcing immigration laws against various illegal aliens, and to essentially create through executive action a new amnesty program. But Article I, Section 8, of the Constitution gives Congress, not the President, the authority to govern in this area. And Article II, Section 3, commands that the President "faithfully execute" the laws passed by Congress. Thus, under the Constitution's view of presidential power, President Obama may not refuse to enforce a congressional law just because his political fortunes may be improved by so refusing.

A similar dismissal of the rule of law occurred when the Obama administration used a bureaucratic device (called a section 1115 waiver) to eliminate the highly successful work standards contained in the 1996 welfare reform law. This elimination allows the government to create new standards, thus violating both the letter and purpose of the Temporary Assistance to Needy Families law, passed by Congress in 1996 as a replacement of the old Aid to Families with Dependent Children law. But what it also did was to increase the reach and power of the federal government.

Liberals have traditionally stood for free speech, but the Obama administration's punishing actions against donors who contribute to political opponents certainly contradicts that stance. Examples are increasingly coming to light that show how the government has employed the IRS, the SEC, and other agencies to go after contributors to political opponents, intimidating them from supporting their favored candidates. Thus, speech freedoms take a back seat when the power to control government is at issue. The same is true for government openness and accountability. For instance, with respect to its refusal to cooperate with the congressional investigation of Fast and Furious, the Obama administration has proved as secretive and stonewalling as the Nixon administration.

Just as the constitutional framers foresaw, there are some areas in which government performs well — but those are limited areas. Government can build roads and train an army and enforce the law, but government cannot be an economic arbitrator or investment banker — just look at the record of all the Solyndras. Even in fighting poverty, the government has a terrible record. In its anti-poverty campaigns, the United States spends $65,000 for every poor family, even though the national family income average is $50,000. This is because most of that $65,000 goes not to the family, but to the governmental and political elite, who in turn become powerful forces for keeping the government involved, for keeping people dependent on the government, and for never actually solving the poverty problem. 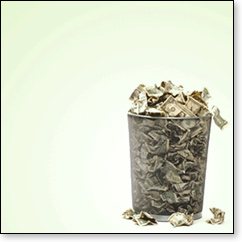 The opposition to big government

There are many objections to big government. One is a dependency objection. As of the first quarter of 2010, 48.5 percent of Americans lived in a household that received some form of government assistance. This was an increase from just two years earlier, of 44.4 percent, and a dramatic increase from thirty years earlier, of 30 percent. Once Obamacare is implemented, the percentage will climb past the 50 percent level — more than half the public will be dependent on the government for some form of economic assistance. And if Europe is having such a difficult time cutting back its entitlement state, imagine the difficulties America will have once Obamacare is in full swing.

This expansive reach of government can obviously be opposed on policy grounds — e.g, that it not only fails to achieve what it claims to be achieving, but is actually harming the economy and society. However, because of the entitlement state, political opposition to big government is becoming increasingly marginalized, since much of federal spending has become insulated from the political process. For instance, nearly two-thirds of annual federal spending (on Social Security, Medicare, and Medicaid, among others) occurs without any vote or approval by Congress — it occurs even if Congress doesn't do anything.

No one bothers to argue that the federal government is an efficient provider of social services or a proficient investment decision-maker. No one. Instead, the Left defends big government on the basis of a false negative argument: that the conservative argument against big government is just a reactionary opposition that completely ignores the needs and interests of the average American. But there was good reason that the framers incorporated the principles of limited government into the Constitution.

Big government as a contradiction of constitutional principles

The current big-government mentality reflects the Democratic party's governing philosophy: to fragment the American public into an array of distinct interest groups, and then to win the votes of these interest groups with a buffet of government benefits. In essence, Democrats create a politically privileged class in America, and then cater to that class at the expense of everyone else. As Jay Cost reveals in Spoiled Rotten: How the Politics of Patronage Corrupted the Once Noble Democratic Party and Now Threatens the American Republic, the Democratic Party has become "a kind of national Tammany Hall whose real purpose is to colonize the federal government on behalf of its clients."

But this is not how the Constitution envisions American democracy working. A viable, enduring democracy cannot operate based on the monetary benefits it is able to shower on selected groups of its citizens. This is a ticket not just for pervasive public resentment, but for national bankruptcy. A democratic society cannot prosper as a special interest state in which a majority of its citizens are financially dependent on the government. Nor can a democracy prosper when government is able to further continue its growth by creating a kind of permanent electoral majority of dependent citizens. 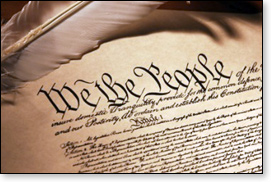 The problem with big government is that it deprives society of its most cherished value — freedom. A government that appoints itself as economic distributer will inevitably interfere with both individual and social freedom. It also deprives society of its internal mediating process. Instead of letting a free economic and social system distribute economic and social goods, government takes on that function and becomes the supreme allocator. But of course, government will inevitably favor the powerful and politically-connected.

When government intrudes too much in the economic mediation process, it undermines earned success and facilitates a learned dependence — an entitlement mentality. For all the drawbacks of the private economic system, it does not bankrupt culture by creating a dependent citizenry.

Contrary to the intent of the constitutional framers, a big-government system possessing the power to dictate economic and social distributions reflects a system in which vast power has been acquired by various factions in society — power that in turn can infringe on the freedom of others. But the thrust of the Constitution is the creation of a complex set of structures and processes that seek to avoid the permanent creation of such power blocks in America. Thus, the very principles of the American Constitution make the moral and political case against big government.

The whole limited-power scheme of the Constitution seeks to provide the structures and processes by which people agree to limit their own short-term desires in return for having others do the same, so as to create a society in which all of society can survive and prosper. But big government undermines this whole scheme. It injects an arbitrariness into democratic society. Take, for instance, the Dodd-Frank bill, which gives to the newly-created "Consumer Financial Protection Bureau" the power to ban or ration almost any consumer financial product deemed "unfair" or "abusive," with virtually no oversight from Congress.