September 15, 2012
Our electronic media culture supports an ever-shortening attention span. It focuses all attention on the immediate, the here and now. The past seems to disappear as quickly as a plate of cookies in the employee lounge.

But no matter how much sensationalism is crammed into 24-hour cable stations, and no matter how fast the Tweets are sent, the basic rules of history still prevail. And one such rule is that some fundamental issues and conflicts take a very long time to play out. 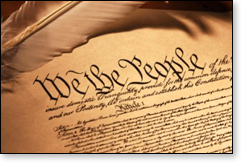 The enduring need for "constitutionalism"

Take the New Deal legacy, for instance. If there is one basic issue defining the 2012 election season, it is the conflict over the New Deal legacy. Indeed, it is a conflict that has been building since 1980. And at the heart of this conflict — this conflict over the scope of government involvement in the economy and society — lies the basic issue of constitutionalism and the limits the U.S. Constitution places on government power.

Constitutionalism isn't an issue that was discovered by the Tea Party. It is not an issue that first arose with the Watergate crisis, or Roe v. Wade, or President Truman's seizure of the steel industry. It is an issue that has been debated since Marbury v. Madison and the formation of the First National Bank. But in modern times, constitutionalism reached a particular intensity during the New Deal era. Constitutionalism was the warning track that surrounded the political playing field of the New Deal agenda. It was a reminder that the Constitution set limits on government power, regardless of the perceived social and economic need for that power.

Eighty years ago this November, President Franklin Roosevelt was elected and the New Deal was launched. And accompanying the New Deal was the liberal argument that, at least with respect to social and economic legislation, constitutionalism should be downgraded.

One of the effects of the New Deal legacy is the separation of government power from its constitutional foundations. This separation, however, ends up threatening the very legitimacy of government power. Because majority will is fluid and impermanent, democratic government is inherently fluid and impermanent. Public desires change continually with changing circumstances. Consequently, unless government is tied to a lasting and enduring foundation, its legitimacy can be questioned. 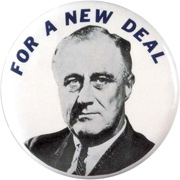 The decline of constitutionalism has contributed to the increase in political divisiveness. Indeed, our current political terrain is starkly divided into a red versus blue geography. Yet even though the left continually bemoans this state of political division, it simultaneously works to erode the one foundation that can serve as a unifying point — the Constitution.

Being a constitutionalist means respecting and adhering to the limits of politics. This is one of the most basic conservative messages: that there are limits to politics and activities government should not pursue; that unlimited desires lead to unlimited government, which in turn leads to unlimited threats to liberty.

The New Deal's rejection of the constitutionalism of the past has led us to the high- stakes problems of the present. The New Deal rejection of constitutionalism has led us to an entitlement culture that threatens the very sustainability of the public sector. It will be no easy task to resolve the government deficit problem and the serious threat posed by continually escalating entitlement payments. But these problems were set in motion when the Constitution's wisdom and commands were ignored eighty years ago. Constitutionalism is nothing new; it is not some new conservative or reactionary theory. And if it had been followed during very difficult times in the past, we would not have the types of political problems we now have.

He has published ten books, including Wrestling With God: The Court's Tortuous Treatment of Religion and An Entrenched Legacy: How the New Deal Constitutional Revolution Continues to Shape the Role of the Supreme Court (Penn State University Press).

He is a frequent speaker on conservative legal and political issues, and has delivered invited lectures at more than 60 universities. His popular audience essays and articles have appeared in dozens of newspapers and magazines, including the Chicago Tribune, the Minneapolis Star Tribune, The Washington Times, Cincinnati Post, Indianapolis News, Commonweal, and the Omaha World-Herald.

He has also been interviewed on dozens of radio and television programs.

April 14, 2022
Under progressives, America has become poor in ways that Ukraine is rich

February 9, 2022
The myth of a mainstream media

January 29, 2022
A mistrust brewing for a half-century

January 14, 2022
The danger to democracy comes from the Left