"VA will furnish a burial flag for memorialization for an other than dishonorably discharged:

Veteran who served during wartime

Peacetime Veteran who was discharged or released before June 27, 1950 after serving at least one enlistment, or for a disability incurred or aggravated in line of duty

Certain persons who served in the organized military forces of the Commonwealth of the Philippines while in service of the U.S. Armed Forces and who died on or after April 25, 1951 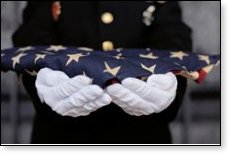 As a retired SNCO I will not let my flag be used as a cheap political stunt to pander votes for the 2020 election.

Please view the link below by fellow veteran Peggy Hubbard before it gets taken down.

MSgt Armand C. Hale retired from the U.S. Air Force serving his country for over 23 years. His many tours of duty included the Republic of Korea, the Kingdom of Saudi Arabia, and the State of Qatar. He has a Bachelors degree in business & management and has written a book on his experiences in the country of Qatar. You can purchase his book at amazon.com and Lulu Books. jmjpbpb@gmail.com

January 30, 2017
An open letter to the 45th President of the United States