Christian Hartsock
So a liberal blogger walks out of a bar...

March 11, 2010
On March 5, in a kicking-and-screaming, last-ditch effort to save her organization, ACORN CEO Bertha Lewis wrote in BeyondChron.org of the "right-wing attacks" on ACORN by "undercover right-wing racist James O'Keefe," repeating a Greatest Hits compilation of factually-defunct angles left has desperately drummed into the mainstream for the past five months, from the race angle to the doctored-videos angle.

On March 4, Stephen Colbert staked these angles in to the pop culture turf in light of the Brooklyn District Attorney's recent report that the undercover tapes were "heavily edited," producing a satirically-edited interview with Sean Hannity to deride James' alleged "deceptive editing." No mention that Charles Hynes, the Brooklyn DA, was endorsed by the ACORN-related Working Families Party during his recent bid for re-election. (Find the unedited audio and full transcripts here.)

And my recent bar brawl with Tommy Christopher  a Mediaite blogger who has been promoting the notion that James O'Keefe's ACORN investigation was racially motivated  in Washington D.C. during CPAC, confirms my assessment of the utter desperation of O'Keefe's critics.

Ironically, with no tangible evidence that O'Keefe's videos were, in fact, "heavily edited," the left has been literally heavily editing their attack plan against him  correcting, updating, and revising their angles of assault in order to catch up with the facts.

The left tried to play off the first few ACORN tapes as mere evidence of "just few bad apples." But as more tapes were released, they soon realized the next defense would have to be that it was just one bad apple tree.

When it was inarguable that the tree itself was completely infected, liberals ran like hell from ACORN, Rep. Nancy Pelosi calling their behavior "despicable" and President Barack Obama saying it was "inappropriate and deserved to be investigated."

And on February 22, it was announced that ACORN was to dissolve as a national structure (a move nevertheless recognized as more of a mere name-change). So, for the record, not only have Democrats been running from ACORN  now even ACORN is running from ACORN.

But despite all the distance they managed to put between themselves an ACORN, the left still dubbed the investigation an "attack"  and even more curiously, an attack they took personally. And now they want revenge.

There is but one reason that not only Bertha Lewis, but the mainstream establishment itself refuses to recognize James O'Keefe and Hannah Giles as investigative journalists, or bitterly add "scare quotes" to the term; it must be because they felt ACORN's downfall was a team loss, and that they themselves were the ones under investigation. As the former Communist-turned-conservative, Whittaker Chambers, once wrote: "Innocence seldom utters outraged shrieks. Guilt does."

They first attacked O'Keefe for allegedly "attending a white supremacist forum." But then Larry O'Connor revealed that the organizer of "white supremacist event" was half-Jewish and half-Korean. Yeah, see, that didn't work out so well, now, did it?

Their next angle has been echoing the Brooklyn District Attorney's office contention that the videos were a "heavily edited splice job." No they weren't. And we still await a shred of evidence to the contrary. However, the left doesn't depend on evidence to support their accusations  they depend on the loudness and repetition of the accusation itself. 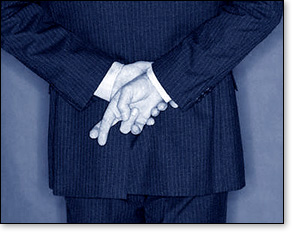 In a tennis match, I can't return the ball until it has been served into my court. Likewise, the left's accusations cannot necessarily be contradicted until they at least have evidence or proof to corroborate said accusations. As far as I am concerned, the ball has not even made it out of their court. But I have a sneaking suspicion they don't want it to make it out of their court, because they know their accusations are lies and will be returned swiftly. So there they are  tossing the ball up and down and forcing us to swing our rackets at the air.

But let's not get distracted by the irrelevant issue of whether O'Keefe wore his "pimp costume" inside the ACORN offices; the point is, he said he was a pimp, and the recorded conversations are clearly understood in that context. Let's look instead at the larger picture: why are they digging their own graves with their ceaseless and baseless attacks? They know they have no ammunition for a full-frontal assault, so their current tactic is to whisper innuendos about "racial motives" into the parrot cage, wait for the parrots to pick up on them and begin squawking loudly, and then ask the target: So how do you respond to what the parrots are squawking? Hey, don't look at me! I didn't make the accusation  the parrots did.

Imagine if such tactics were employed by conservative reporters: "So, Secretary Gibbs, how would you respond to allegations that Jeremiah Wright has been a secret monthly guest in the Lincoln bedroom? I'm not making the allegation, I'm just asking how you would respond to it." Of course, no one on the left would take issue with such a question  because it's only a question, right?

Tommy Christopher apparently thinks we're that stupid. When I asked him why he has invested so much energy into dignifying a preposterous question with repetition, he distanced himself from the question itself, screaming: "I didn't make it up!"

Well I didn't make up the idea that the moon landing was staged  but you don't see me chasing down NASA scientists and asking them how they would respond to the allegation.

So perhaps Tommy Christopher did not "make up" the accusations about James' alleged racial motives, but at least Christopher and I both apparently agree that they were, in fact, made up.

Hartsock directed the undercover investigation video Teachers Unions Gone Wild which exposed sleaze and corruption in the New Jersey Education Association, earning the accolades of Governor Chris Christie, produced B-roll for James O'Keefe's and Hannah Giles' investigation videos that brought down ACORN, exposed anti-Americanism at the UN Climate Summit in Cancun and continues to work on investigative journalism videos. He's traveled to Iraq with Move America Forward to document the Iraq war and was profiled in CNN's documentary Right on the Edge a documentary about young conservative activists hosted by Abbie Boudreau. He currently writes for several news and commentary websites, including Big Government and Big Journalism, and is Editor-in-Chief of Political Vanguard.

His commentary has been discussed on Fox News' Red Eye w/ Greg Gutfeld, and has landed him as a guest on several TV and radio talk shows over the years. He was born in Oakland, California in 1986 and currently resides in Los Angeles. Christian@DionysusProductions.net

February 6, 2011
Calls for lynching of black justice at predominantly white political rally (sorry MSM, no tea in this blend)

January 11, 2011
How John Lennon killed Sharon Tate (and other ideas for MSM narratives)

August 5, 2009
Democrats on race: We refuse to overcome