October 29, 2010
If James O'Keefe and I were to release a video catching disguised al-Qaeda members casually joking about blowing up the Brooklyn Bridge, the mainstream media would likely be most interested to know who pays our salaries.

Upon the release of our ACORN videos which featured federally-funded ACORN employees aiding a "pimp" and a "prostitute" in setting up a brothel for 14-year-old El Salvadoran sex slaves, the MSM shifted the narrative towards James and Hannah, whether they were lying about their budgets, if Fox News hired them, and whether they were actually dressed as a pimp and prostitute while entering the ACORN offices.

Predictably, the MSM has sounded the same recycled narrative in the midst of our more recent release of Teachers Unions Gone Wild, showcasing tenured teachers calling black students the "N' word without reprimand, teachers using a taxpayer-funded NJEA conference to wickedly chant intents to "slander" New Jersey Governor Chris Christie, and union leaders sharing anecdotes about rigged elections and voter fraud, among things. Rather than investigate the stuff of our investigation, the media has found it more pressing to investigate us.

It's embarrassing enough that we mere twentysomethings manage to scoop seasoned, established mainstream journalists on outing corruption, fraud and waste in government. So it is ironic that mainstream journalists feel compelled to embarrass themselves further by dismissing the juicy meat of our exposes to cover our material with awkwardly petty and irrelevant lines of questioning. They are like a high school cheerleader envious over the new girl who just started dating the captain of the football team. Like, are you being funded a lot? Are you like, just a poser or something?

I am sure the parents of New Jersey are just so fascinated with the financial logistics of our investigative videos rather than the inescapable fact that their children are subject to arrogant, sleazy, sometimes racist teachers committing voter fraud, wanting to f*** with kids, and calling black kids n*****s without consequence. And as Gov. Chris Christie himself said regarding our video, "[i]t hurts the great teachers just as much as it hurts our kids."

However, rather than evince any concern for the behavior of our subjects caught on tape, the union has sought to ease the public's concern by insisting our tapes were "doctored" and "dubbed." 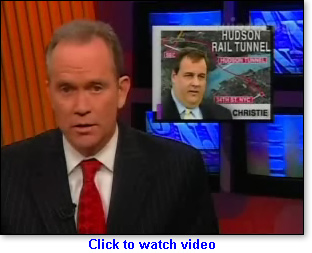 I hate to be a nuisance and have to delegitimize the adorable little last-minute narratives being drummed up by the NJEA members and some of our esteemed colleagues in the journalism world, but having directed Teachers Unions Gone Wild, edited and supervised the whole post-production process, I kind of, sort of happen to have all the raw footage directly at my disposal and am happy to let it speak for itself. Sorry, guys.

Do I selectively edit the videos? Well against the risk of boring my audience with the tedious entirety of all dozens of hours of raw footage we have, yes. After all, it was Hitchcock who said that film is "life with all the boring parts cut out." But is "selective" synonymous with "deceptive"? No. I would not call CNN out for airing a recent documentary about me [http://siu.blogs.cnn.com/2010/10/01/inside-right-on-the-edge/] for selectively separating my most interesting soundbites from my mundane rambling, nor has anyone else. But if our detractors are so eager to be bored to death, I am more than happy to release the raw footage in context.

But what's even more interesting — actually fascinating, and to us, disappointing — is Alissa Ploshnick's recent self-reduction in the form of a hereby provable lie about something so petty that I cannot imagine why it warranted such a forfeiture of integrity. Ploshnick now establishes (to the MSM's mouthwatering delight) a predictable "heavily edited" narrative by way of her spokesman Steve Wolmer's talking points.

NJEA Communications Director Steve Wolmer has come forward on behalf of the "sheltered" Ploshnick, insisting that the recorded talking points of hers we have — including her emphasis on how hard it is to fire a tenured teacher, as well as her an anecdote in which a tenured teacher called a student the "N" word only to be slapped on the wrist with a demotion — were manipulatively tossed into the same context when they were uttered in totally separate contexts.

Wolmer explains that Ploshnick was recounting an episode from her own high school days in Clifton High twenty years ago, in which a mere student called another student the "N" word in the hallway, insinuating it was shared in a totally separate context from her emphasis on how hard it is to fire tenured teachers.

Most saddening to me is the fact that Alissa Ploshnick, while arguably a star in our video, until recently has held a rather clean bill of health. All she did, according to our video, is unwittingly blow the whistle on a fellow teacher who called a black student the "N" word, and subsequently (albeit bizarrely) avoided James' approach for follow-up and in due course tried to stalk him on his way home. Basically, she had neither done, nor said anything wrong — until now.

Via her spokesman, Wolmer, in an unfortunate attempt to discredit us, Ploshnick has unnecessarily discredited herself by insisting I manipulatively grouped her emphasis on the difficulty of firing a tenured teacher with her anecdote about a colleague calling a black student the "N" word. Did I separate the two soundbites to accommodate a voiceover punctuation in between? Yes I did. But now, I will present to you the monolithic clip incorporating both soundbites side-by-side which she has since claimed to be uttered on separate terms: 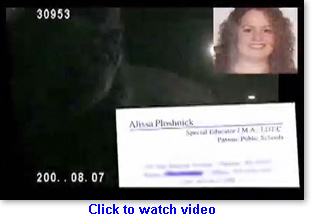 While I enjoy observing the desperation and creative conspiracy theories of these teachers in suspect and the liberal press for my own amusement purposes, my journalistic ethics compel me to set the record straight.

It was never our intention to bring Ploshnick down, thus it is saddening that she has insisted on bringing herself down with an unnecessary lie and distortion of the facts in an apparently (unsuccessful) attempt to protect her brothers in arms (or at least not be seen as a whistleblower thereof). I both regret Ploshnick's Nixonian cover-up and wonder how Wolmer himself sleeps at night, and possibly returns home to a wife and children knowing he is a shameless liar with zero hesitation to mislead the public for the sole sake of protecting his fellow union flock. I now have no choice but to view both instances as disturbing testament to otherwise-innocent individuals committing credibility suicide in the name of corrupt union fraternization. They didn't need to do this to themselves, but in challenging our credibility, they ended their own.

Despite the 20-gauge holes in these detractors' testimonies, the mainstream media has seen fit to give them the benefit of the doubt. Media Matters, who has apparently decided that rigged elections, voter fraud and institutionalized racism don't matter, made their concerns clear in the headline "James O'Keefe doesn't show up for his own press conference," [http://mediamatters.org/blog/201010250026] challenging Trenton Tea Party Leader Daryl Brooks to explain why O'Keefe didn't show up to a conference O'Keefe never promised to show up to. This, of course, was at the expense of pursuing any investigation into the transgressions of the teachers in suspect, merely ridiculing Brooks for taking O'Keefe's claims of video authenticity at face value: "He said that he believed the O'Keefe videos were valid because 'he told me' they were."

Thus it is fascinating that Media Matters, [http://mediamatters.org/blog/201010270008] upon receiving wind of Ploshnick's lies, jumped and clapped with glee to trumpet her case, albeit taking her words at face value: "I'm sure you will be shocked to learn that Ploshnick now reportedly believes her comments were taken out of context," concluding that "out-of-context videos" are now obviously "synonymous with O'Keefe's name." In a subsequent piece (http://mediamatters.org/research/201010270033), Media Matters goes right ahead and definitely calls Teachers Unions Gone Wild a "series of heavily edited smear videos." For an outlet that pompously laughs at Daryl Brooks for having blind faith in James' word, one would assume they wouldn't be so quick to have blind faith in Ploshnick's word, which is now confirmed lie. But then again, this is Media Matters.

We live in a society where in the past couple months several gay students have tragically ended their lives as a response to homophobic bullying. As a result, media muckrakers Wanda Sykes and Kathy Griffen have taken it upon themselves to establish a narrative implicating conservatives as indirectly culpable for their deaths. Will the MSM now shrug off evidence of not a student, but a teacher, bullying a student with the worst possible racial epithet, in the name of Proletariats of the World Unite?

The coming days will tell us, and this is their moment to prove our expectations wrong. So far, they get a resounding "F."

Hartsock directed the undercover investigation video Teachers Unions Gone Wild which exposed sleaze and corruption in the New Jersey Education Association, earning the accolades of Governor Chris Christie, produced B-roll for James O'Keefe's and Hannah Giles' investigation videos that brought down ACORN, exposed anti-Americanism at the UN Climate Summit in Cancun and continues to work on investigative journalism videos. He's traveled to Iraq with Move America Forward to document the Iraq war and was profiled in CNN's documentary Right on the Edge a documentary about young conservative activists hosted by Abbie Boudreau. He currently writes for several news and commentary websites, including Big Government and Big Journalism, and is Editor-in-Chief of Political Vanguard.

His commentary has been discussed on Fox News' Red Eye w/ Greg Gutfeld, and has landed him as a guest on several TV and radio talk shows over the years. He was born in Oakland, California in 1986 and currently resides in Los Angeles. Christian@DionysusProductions.net

February 6, 2011
Calls for lynching of black justice at predominantly white political rally (sorry MSM, no tea in this blend)

January 11, 2011
How John Lennon killed Sharon Tate (and other ideas for MSM narratives)

August 5, 2009
Democrats on race: We refuse to overcome