March 3, 2009
Back on January 29, we discussed the daily strategy phone call engineered by Obama's Chief of Staff Rahm Emanuel for friendly TV commentators and "reporters." Politico reported that Emanuel has a daily phone conference call with ABC's George Stephanopoulos, and CNN's James Carville and Paul Begala. With Rush Limbaugh's raucous CPAC address, as he termed it his "first address to the nation," we can see at least one example of what is likely an attack strategy resulting from the Emanuel phone session with a rush to bash Rush the day after the appearance. [Image credit: politico.com] 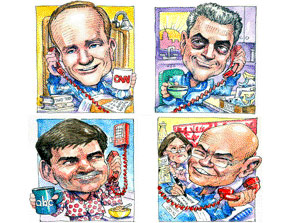 As soon as the sun rose on the day after Limbaugh's CPAC appearance, three of the four of the phone call participants attacked Limbaugh with the same talking points. It seems obvious that they coordinated their attack together in the Obama secret strategy session. It is amazing that a president's staff can have such power over major media figures without a peep being heard from those that only months ago bashed former presidents over a perceived undue, even "dangerous," control of the media.

The morning after Limbaugh's CPAC speech, Obama Chief of Staff Rahm Emanuel appeared on CBS News' Face the Nation and told Bob Schieffer that Limbaugh was the "voice of the Republican Party," and that he "hasn't stepped back from" the "hopes for failure" he expressed for Obama's administration.

James Carville, obeying his Obama marching orders, said pretty much the same thing in his CNN commentary headlined, "A history lesson for Rush Limbaugh," where Carville began by saying that Rush is the "moral and intellectual leader and most influential person in the Republican Party."

As for ABC's George Stephanopoulos, he employed the same talking point about Rush's hope that Obama's socialist policies would not succeed  though it is sure that Stephy didn't call Obama's policies socialist. In an interview with Eric Cantor, Stephanopoulos said, "So the Rush Limbaugh approach of wanting the president to fail is not the Eric Cantor, House Republican approach?"

So, what we see here is the combined attack emanating out of the secret phone call strategy session pushing the themes that Rush is the "voice of the GOP" and that he wants Obama to be a failure  both talking points that are not exactly in context with the facts. The strategy at work is that these three Democrat activists pretending at members of the media have concocted with the White House through Emanuel an effort to tar all Republicans with the Rush brush.

These Obama strategists think that making Rush the "voice of the GOP" will drive away moderates and make the GOP seem to be leaning toward right-wing extremism. And, by adding Rush's hope that Obama's socialist policies fail, these strategists are attempting to claim that Republicans hate Obama merely because he is president (veiled racism) and not because the GOP is against these unAmerican polices Obama is pushing.

Once again, I have to ask, why are these secret phone call strategy sessions not a matter of public discussion? That the White House is orchestrating media messages with the supposedly independent press corps, is it nothing to raise an eyebrow about? Should we not see this as the sort of collusion between the press and the White House that leads to public information controlled by political spinmieisters in the belly of the White House instead of journalists interested in truth? Where are those that only until recently claimed to be interested in a free press dedicated to the real story? Why are they so suddenly quite?

Lastly I'd like to suggest something. These folks are all eager to reinstate the Fairness Doctrine, of course. So, I am wondering if it would be "fair" that Rahm include a few conservatives in the secret phone sessions he has with his lap dog media pals? Let's say along with Stephy, Carville and Begala, Rahm might include Rush and Sean Hannity?? Seems pretty fair to me, anyway!