March 30, 2009
Thus far, Secretary of State Hillary Clinton has made two diplomatic blunders during her visit to Mexico that the U.S. Old Media are shockingly uninterested in highlighting. One was a policy blunder and the other a cultural/religious one. 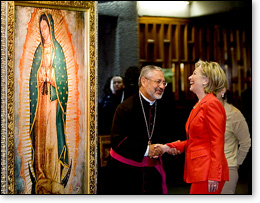 Clinton's first mistake was in imagining she is still a Senator that can make pronouncements on pending laws and policy plans instead of a mere envoy of the president, a mouth piece that hasn't the same freedom to invent policy prescriptions and laws that a Senator does. Last week, Clinton told Mexican officials that "we"  as in the U.S. government  are considering re-upping the so-called assault rifle ban because Mexico's drug violence is "our" fault.

When asked on March 27 about plans to return to the 1994 law banning "assault weapons" (a vague and illegitimate term at best), Obama's press secretary replied that he was unaware of "any plans" to reinstitute the ban.

Clinton obviously spoke out of turn making promises to Mexican officials that she was not authorized to make.

Catholic tradition holds that the image of Our Lady of Guadalupe was miraculously imprinted by Mary on a cloak belonging to Saint Juan Diego in 1531. As Monsignor Diego Monroy brought Clinton before the shrine, Clinton asked her blundering question.

After observing it for a while, Mrs. Clinton asked "who painted it?" to which Msgr. Monroy responded "God!"

Now, perhaps Clinton being so woefully ignorant of anything religious isn't such a surprise, but for a Secretary of State to be visiting one of the most famous and important churches in the region, one holding a much beloved religious relic, without even finding her staff informing her "who painted" the image reveals a shocking lack by professionalism of both the Secretary of State and her staff.

Add this to the "button gaffe" of March 7 where Clinton's staff failed to find out how to spell a simple word in Russian and we are seeing a Secretary of State failing in the simplest of tasks making a mockery of our "diplomatic" outreach.

Sadly, the Old Media is letting her off the hook with aplomb.