Warner Todd Huston
McCain/Graham are right on this one, anyway!

May 7, 2009
After several years of missteps and dunderheaded RINOist policy proscriptions, Senators John McCain and Lindsey Graham got one right for a change. The unctuous pair published an Op Ed in the Wall Street Journal on May 6 that is spot on in its analysis of the dangerous road down which Barack Obama and the Democrats are taking us as far as the war on terror is concerned. 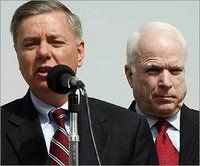 Because this issue is so important and so as not to waste time, we will take as a given here the poor standing that both Senators rightfully have with conservatives, set aside their RINOism, and move past their inability to "get it" on every other issue but this one. What McCain and Graham had to say in their WSJ piece is of supreme importance and it is an area where we can all agree upon in all the most important ways. So, let's focus on the Guantanamo facility and the greater debate on the war on terror, shall we?

In the first paragraph of the piece McCain and Graham pinpoint one of the most injurious things that Obama's possible upcoming "truth commissions" will have on future American administrations. Obama's prosecutions of Bush officials for having given their honest council to the president will simply destroy the trust that future advisers will have to give their best council. If future advisers imagine that they can be hauled off to jail with ever new administration's ascension to office, no adviser will ever feel safe. All will unduly hedge their advice for simple self preservation. This cannot help but hurt this country from this point forward.

McCain and Graham write, "We believe that any subsequent attempts to subject those who provided such legal advice to prosecutions are a mistake. They will have a chilling effect on the candor with which future government officials provide their best counsel."

In fact, we have already seen the deleterious effects that Obama's coming crusade against members of Bush's administration has caused. Already the CIA is so wary of Obama as to seriously damage its already low level of trust in the presidency and its already low level of effectiveness in the field. The reticence of the CIA to give its full, thoughtful council will spread to every other agency soon enough if Obama allows these show trials to begin.

This will surely make us less safe.

The next point is also spot on.

In January, the president announced via executive order that the detention facility at Guantanamo Bay will close within a year. The announcement was easy  but it left unanswered the hardest questions about detainee policy for the future.

As we have seen with Obama so often, he is prone to windy pronouncements and showy efforts that contain little substance. In the case of his signing of an executive order to shut down the Guantanamo Bay facility we have all the worst of that propensity. Not only did Obama not really sign any order to shut the facility down  all he signed was a pledge to take the matter up in a year  but he also did not bother to make provisions to pay for the effort, nor make any plans on what to do with those imprisoned there once it is shut down.

It was an act free of any substance whatever made solely to get his extreme left-wing patrons off his back. But it was a reckless action, nonetheless.

From there McCain and Graham go on to detail some salient points on how to treat these terrorist combatants, what to do with them and what not to do with them. Each point is an excellent read of the situation. Obama would be right to listen to them.

The two Senators say that terrorists are not "criminals" and they should not be brought into our civil courts. The designation of "enemy combatant" is a good and proper convention and so military commissions are well and proper, they say. Also we absolutely must decide what to do with those we've already gobbled up and placed in detention before we make airy pronouncements of shutting down the facilities in which they are housed.

Lastly the pair bring up the single biggest failing of the Bush Administration, though they don't necessarily identify it as such.

Finally, Congress must be involved in crafting detainee policy. It is critical for all branches of government to work together to develop solutions to the complex legal problems presented by this war.

George W. Bush's single biggest failing was not spending, it was not the No Child Left Behind program, it was not the war itself either. It was his failure to fully engage Congress in the definition of terms and the creation of the legal process by which we as a nation dealt with the war on terror.

Bush took the role of war president one step too far when deciding that handling enemy combatants and creating the processes by which we would prosecute terrorists was a thing only a president should do within his duties as a war leader. By essentially ignoring Congress he opened himself up to the sort of left-wing, partisan attack that the Democrat Party glommed onto as a way to oppose his presidency.

Instead of taking the findings of his legal council and simply moving forward from there as if Congress had little or no part in the debate, he not only handed enemies to American safety and power a club with which to beat him over the head, he also denied the public the vigorous debate over national security that the country and the issue deserved. Yes, it would have been messy. But it should have occurred, anyway.

The piece ends with a paragraph that I truly wish the Bush administration had considered:

We believe that the time has come to focus on these urgent issues, rather than spend the nation's energy on the debates of the past. We stand ready to work with President Obama to develop an enemy-combatant detention process that is transparent, provides robust due process consistent with the law of war, involves an independent judiciary, and protects us against a dangerous enemy. The American people and the international community will see such a system not as an arbitrary exercise of power, but as an intelligent balance of due process and national security.

The only problem I see here is that the Democratic Party has now vested itself in losing the war on terror, scaling back actions against our enemies, and making the USA safe. I hope it isn't too late to have this debate.

So, kudos to McCain and Graham for a fine editorial. Let's hope it finds some open minds inside the Obama administration... though I, for one, won't be holding my breath.

Please go read the McCain/Graham piece in the Journal. See if you don't agree with it in all the most important ways.