Warner Todd Huston
More media malpractice: you thought I was joking about Gary Sinise, didn't you?

May 19, 2009
I hate to pull an "I told you so," but... well, I told you so. Remember a few days ago when I showed how an unsubstantiated rumor becomes political "fact" in the Old Media? I reported that CNNs Peter Hamby found one woman that wondered if actor Gary Sinise might make a great GOP candidate and based an entirely fictional run for office on that wild conjecture. Also you'll recall that at the end of my piece I said that it won't be long until this one person's rumination will suddenly turn into the "fact" that Gary Sinise is running for president. You may have laughed at that. But now I present to you this I told you so moment. 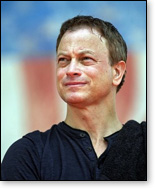 CBS channel 2 in Chicago gave us a May 13 report titled "'CSI: NY' Star Rumored To Be Eyeing White House." I kid you not.

You might ask upon what basis this CBS report claimed that Gary Sinise is now running for president in 2012? Was it an interview with Sinise? How about a statement by any group representing Sinise? How about some statements from a PAC or fundraising group or other draft Sinise effort? Nope, none of those. It was the same ONE person that CNN's Hamby used for his false claim that Sinise is a sudden candidate for office.

I couldn't have been more right. So, one woman says that Sinise might make a good candidate for the GOP and that instantly become headlines blaring "Sinise Running for Prez!!"

Is there any effort at all in the Old Media to fact check or substantiate claims?

This report is especially egregious, too. After all this hooplah about Sinise's candidacy for the White House, the CBS 2 piece ends with this paragraph:

CBS 2 was unable to reach Sinise himself for comment on all this buzz, and his publicist did not return calls.

So after a dozen or so paragraphs talking of his "candidacy" the piece ends proving that they had nothing but conjecture all along? This is journalism?

I would also like to say something of this woman that CNN and CBS is using to base their Sinise candidacy fantasy upon. Nicolle Wallace is a former Bush and McCain adviser and currently works for CBS as a political analyst. She was also the White House Communications Director under George W. Bush. It was Wallace that is responsible for the many missteps in communication with the American public of the ideas and policies of the Bush White House that never got explained or even advocated for by the very administration trying to implement them. It was her lame idea not to respond to attacks thereby giving the Democrats an open season against Bush. She was also hip deep in the debacle of how Governor Sarah Palin was handled during the McCain campaign. She made a mess of that, too.

Were I Gary Sinise and were I to have any aspirations at all for public office, I'd ask Nicolle Wallace to kindly stay out of it! She has done enough damage to Republican politics.

Now, we may yet find that actor Sinise does have some idea about running for office. But until this talk is actually coming from him or from some group pushing his candidacy this remains bogus reporting. At this time Gary Sinise has neither floated his name, had any group do so, nor announced any interest in running for office directly. It is an Old Media fantasy and nothing else.