January 18, 2010
The special election in Massachusetts for the open Senate seat once held by Teddy Kennedy is the hottest political story of the day. The race is so close that no one is sure who will win but signs are starting to point to Republican Scott Brown's win. Cue the Associated Press with a puff piece on Democrat Martha Coakley that tries to sell her as an "historic candidate" perhaps in order to help push her over the top just before the polls open on Tuesday.

Penned by Steve LeBlanc, the AP headlined its piece, "Coakley Hopes for Historic Win in Kennedy Seat Bid." The subtitle explains why her candidacy is "historic." It reads, "Coakley aims to hold off GOP surge for Kennedy seat, become 1st woman elected senator in Mass."

What puffery. The days when it was noteworthy that a woman was elected to high office are long past. For decades we've had women elected in just about every position in politics from the lowest city and state level all the way to the highest offices. In fact, the only two offices that have yet to see a female elected to them are president and vice president, though we have had credible candidates for them. For all other offices women have long since shattered the glass ceiling. So, how "historic" could it be that we might have yet another elected female Senator? Aren't there several female Senators now serving? Of course there are.

Then there is the assumed status of the Massachusetts Senate seat being "the Kennedy seat" as reiterated by the AP. Last week during the debate between Democrat Coakley and Republican Brown, the Republican scored some points by reminding debate moderator David Gergen that the seat was not the Kennedy seat but was instead "the people's seat."

If the seat is continually reported as "the Kennedy seat" this can only be an attempt to claim that the seat somehow belongs to the Kennedy clan and the Democrats, an assumption that would tend to diminish Republican Brown's chances to win should the electorate accept the assumption.

The piece goes on to explain that "for much of her campaign" Coakley has "steered clear of the Kennedy mystique," and been "low key" in her efforts. This initial proclamation of her moderation is established in the first paragraph but the truth is her campaign has turned increasingly to mud slinging, something to which the AP does not give much notice in its puff piece.

In fact, it's been Coakley opponent Scott Brown that has been low-key in his campaign approach. As Dan Roem of the National Journal's Hot Line On Call noted, Brown's campaign has eschewed hard-line politics, even going so far as to downplay party affiliation. This is similar to the successful campaign of Virginia's new Governor Bob McDonnell who won office on a campaign of "sunny optimism" last November.

Roem correctly notes that Coakley has been employing a lot of negative campaign tactics, something that the AP doesn't bother to note much for its readers.

The piece then goes to recount Coakley's success as a state prosecutor in the District Attorney's office. Interestingly, there is not a single mention of her most famous debacle as DA. The AP didn't make a single mention of the Gerald "Tookie" Amirault case where a man and his family was falsely prosecuted for sex crimes that now appears never to have happened.

But why would we want an even-handed discussion of Coakley in an AP puff piece, eh?

As if to certify that it has no desire to at all help out Coakley's opponent Scott Brown, the AP ends its piece by giving its readers a link to her campaign website but not a link to Scott Brown's website.

Taken in all this Associated Press piece seems to be merely a Coakley campaign press release as opposed to any sort of unbiased reporting of her campaign. And that this piece was posted on the eve of the election seems geared toward giving Martha Coakley an assist. 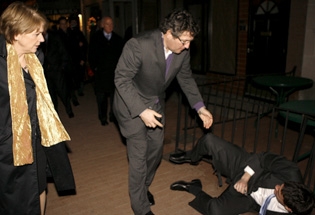 Candidate Coakley stands by and watches her campaign assistant, Democrat media operative Michael Meehan on loan from the National Democrat Party, as he attacks a reporter.