January 20, 2010
Louisiana State Senator A.G. Crowe (R, Slidell) is introducing a bill for the 2010 legislative session in Baton Rouge that would make Obamacare illegal if it violates state laws, effectively making Obamacare null and void in the Pelican State.

Senator Crowe states that his bill "provides that no law or rule shall compel, directly or indirectly, any person, employer or health care provider to participate in any health care system or health insurance."

Crowe insists that Obamacare violates Article I, Section 8 of the Constitution and "is therefore unconstitutional." He also feels that the president's plans violates the 10th Amendment among others.

In addition to the proposed legislation nullifying any possible federal healthcare laws, Senator Crowe has asked Buddy Caldwell, the State Attorney General, to determine if, in his opinion, Obamacare would violate any state laws, the Constitution, or would pass onerous unfunded mandates on the state. (download .pdf of letter)

Senator Crowe has been involved in many conservative projects including the 2009 State sovereignty resolution, a Tenth Amendment policy project. Also in 2009 Crowe introduced a resolution proclaiming April as "Abortion Recovery Awareness Month" which was signed by Governor Jindal. Crowe also became a signatory to AFP's No Climate Tax Pledge. (Crowe's committee assignments and associations can be seen at Project Vote Smart)

Senator Crowe is part of an increasing push by state lawmakers to affirm state sovereignty and Tenth Amendment rights, laws that will likely come before the U.S. Supreme court in short order once Obamacare is passed in D.C. According to Michael Boldin's Tenth Amendment Center some 25 states have introduced state sovereignty resolutions or bills that would nullify federal laws that the state legislature feels violates their laws and those of the U.S. Constitution. 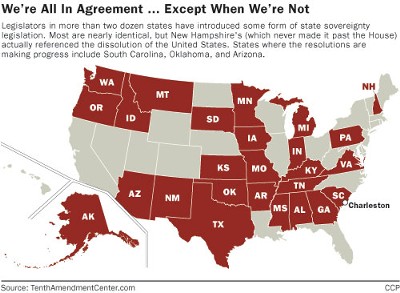