February 16, 2010
About $135 million of our tax dollars in federal stimulus is being wasted on an upgrade for the Edith Green-Wendell Wyatt Federal Building in Portland, Oregon, one aspect of which is the so-called "green wall." Why wasted? Because no one even knows if this "green wall" will even work and no engineering solutions have been found to make it work. Many say the whole thing is impracticable. 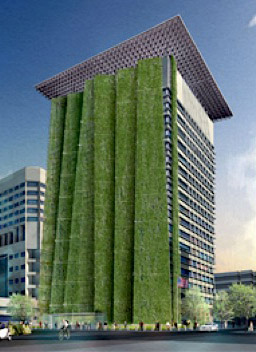 The Associated Press starts its report on this project with a skeptical tone and if Obama's stimulus project has lost the AP, he's in deep trouble. "They haven't figured out yet how to get the pruning done," the AP begins, "but architects and federal officials plan one of the world's most extensive vertical gardens in downtown Portland  what amounts to a series of 250-foot-tall trellises designed to shade the west side of an 18-story office building."

The idea is to have the entire western wall of this building affixed with a trellis that will have planters for greenery in them. These "vegetated fins" are supposed to help the building better regulate its internal environment and use less energy to heat and cool.

The big problem is, though, no one has any idea if the concept will actually work as advertised. Not only that, but no one knows if all this vegetation will even stay alive. On top of it all, there is no real certainty that building operators will be able to even water all these thousands of yards of plants.

But despite the pure speculation of the viability of the project, the thing is being touted as a "landmark high-performance building" by the U.S. General Services Administration.

So, the upshot here is that we're about to pay out some $135 million of the taxpayer's money for a project that is little else but a greenie's pipe-dream as it seems that most of the engineering and architectural challenges of this project are based on conjecture. Will these "vegetative fins" be able to be properly watered and cared for by the building caretakers? Will all this vegetation even stay alive at 200 feet in the air? Will it save energy as claimed? No one knows.

One has to wonder if this is the time for government money to be thrown away on flights of fantasy? In tough times such as this a federal building project might be thought of as a jobs producer, but instead of relying on tried and true building methods the hare-brained schemes being envisioned here could easily turn this thing into an expensive boondoggle. In fact, knowing how dysfunctional our government it, that outcome is more likely than any.

Of course, this doesn't even ask the question of whether the Edith Green-Wendell Wyatt Federal Building even needs this expensive upgrade, or whether this is simply just another unnecessary government pork project.

Regardless, Obama is going to throw $135 million at this thing. Isn't it great to see our government at work?