The joy of rebuilding

Conservatives will soon have one of the great joys of this life: the joy of rebuilding with like-minded comrades. I happen to believe that the time for rebuilding is coming soon. First, consider the following facts that convince me that this is so. Subsequently, I shall portray rebuilding as a time of special blessing for united groups of like-minded people.

The suburbs in revolt

The recent election victories can be credited to moderate and independent suburban voters who are swinging away from liberals and Democrats and voting for conservatives and Republicans. This is happening in electorally important red and blue states. In normally blue (Democrat voting) New Jersey, there was an 8-point swing away from the Democrats. Blue Pennsylvania had a 12-point swing to the right. Normally-red Virginia had a 13-point swing to come back home to the Republicans.

The disillusionment with the present regime and the present Congress is nonpartisan and non-geographic. Whatever their region, party, or lack of a party, moderates and pragmatists tend to be disappointed with their government. The disaffection is strongest in the suburbs. The sprawling suburbs contain a very large portion of the electoral vote needed to elect a president. The middle class suburbs are the place where people are most likely to vote and be politically active. Pollsters have taken special note of the political disaffection of suburban moderates, independents, and women.

The polls evince a swing toward conservative opinion on key issues of political philosophy. An increase of 38% to 45% of middle class suburban voters say there is too much government regulation. Those who say that government is doing things best left to business jumped from 40% to 48%. Those who want unions to have less influence rose from 32 to 42%

Such shifts toward conservative views are also notable on issues such as abortion, immigration, and global warming. Many of our blue-state suburban independents now have a conservative streak, and this may account for the from 29 to 35% increase among those defining themselves as conservative. (Source of statistical data: New York columnist David Brooks, 11/9/09.) 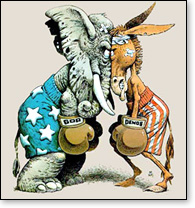 If the rising conservative tide continues, many conservatives will be elected on November 2010 to the House of Representatives and the Senate. Many liberal Democrats and many Republicans in Name Only (RINO's) will be thrown out. Out with the rascals! This outcome is especially likely if unemployment remains over 10%. It is also likely if Congress continues to defy public sentiment in their legislative agenda.

Such victories will place in conservative hands the power to undo the damage inflicted on this country by the Obama/Pelosi regime and by the culture war lefties. The day of rebuilding is coming soon. It will be the time to rebuild constitutional government, a robust civic life, and a moral culture that values truth.

A joyous march of patriots

Personal friends of mine who live in the suburbs who have never before been politically active went to a tea party in Columbus, Ohio, and marched in two of the 9/12 marches in Washington. The couple sat in my living room and agreed that the first Washington march was one of the greatest mountain-top experiences of their lives The uncanny confraternity of ordinary Americans at the march was personal, social, patriotic, and spiritual.

This couple rubbed shoulders with rich and poor, with bankers and hell's angels, architects, athletes, ditch diggers, farmers, mechanics, and carpet cleaners. These distinctions fell away, and the kinship of being fellow Americans remained. Brotherly love and a bold pride of citizenship remained. "And crown thy good with brotherhood, from sea to shining sea." It was real brotherhood from the heart that took no account of superficial differences.

The march had no trace of that cramped self-righteousness of liberal political correctness. The march was redolent with the fresh air of the spirit of freedom, in contrast to the stench of liberal group-think. When real Americans get together and cast off the shroud that liberal elites have thrown over their communities, they rediscover the joy of community known to prior generations of Americans.

The lady I described now seems to be a rising player in local political circles. Her husband can scarcely contain his feelings when he talks about political issues. These people are motivated! It is the motivation of true patriotism. I have seldom seen such commitment, love of nation, and love of community. During the election of November 2010, such people will mass and pull down the monuments to political arrogance and drive out of office the enemies of freedom. At that point, they will be obliged to roll up their sleeves and get busy with rebuilding. 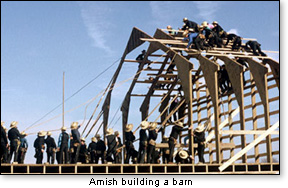 Federal bank examiners in Ohio check mortgage files to see if the property that backs a loan is insured, for this a law designed to prevent bank failure. Every so often, the examiners look into the files for a loan to rebuild a barn and find no insurance. Instead, they find a promise signed by the Amish Bishop that the Amish community will rebuild the barn. Amish law forbids them to purchase insurance. The Ohio Department of Banks has decreed that the Bishop's promise is to be accepted as the legal equivalent of insurance. In other words, the Bishop's promise is as good as gold.

The Director of the Department of Banks, of course, is not trusting the Bishop  he is trusting the amazing consistency of the Amish community. Is he trusting to their virtue? No. They really enjoy getting together to rebuild a barn. They enjoy it because there is something in human nature that enjoys rebuilding with those of like mind. The Amish cult is successful because their leaders make wise use of human nature. I do not approve of Amish legalism, but greatly admire their wisdom about people.

Now let us consider the spiritual side of the joy in rebuilding.

The first Washington march had a joyous confraternity that was a prelude to the spirit of joyous rebuilding. To show how a march can be compatible with this kind of spirit, I shall offer a historical example of such a march that ended in perhaps the most joyous rebuilding of a beloved church in recorded history. I quote from Kenneth Clark's book Civilization. Clark is looking at the faces of the statues on the West portal of Chartres Cathedral as he speaks:

"We know from the old chroniclers something about the men whose state of mind these faces reveal. In the year 1144, they say, when the towers seemed to be rising as if by magic, the faithful harnessed themselves to the carts which were bringing stone and dragged them from the quarry to the cathedral. The enthusiasm spread throughout France. Men and women came from far away carrying heavy burdens of provisions for the workers  wine, oil, corn. Amongst them were lords and ladies, pulling carts with the rest. There was perfect discipline, and a most profound silence, all hearts were united and each man forgave his enemies....

"This feeling of dedication to a great civilizing ideal is even more overwhelming when we pass through the portal into the interior. This is not only one of the two most beautiful open spaces in the world (the other is St. Sophia in Constantinople), but it is one that has a peculiar effect upon the mind....

"Perhaps it sounds sentimental, but I can't help feeling that this faith has given the interior of Chartres a unity and a spirit of devotion that exceeds even the other great churches of France such as Bourges and Le Mans.... The whole harmonious space seems to have grown up out of the earth according to some natural law of harmony." 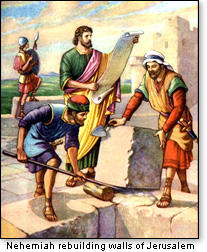 The book of Nehemiah is about the rebuilding of the temple in Jerusalem after the Jewish captivity in Babylon. This was even more of a community home-made job than the building of Chartres. The French were able to hire professional architects, masons, and craftsmen to assist with the job. The French had elaborate mechanical devices for lifting stones. Nehemiah and the Jews were starting from scratch. The building required the utmost effort and great personal sacrifice of every person of the community.

After the temple was complete, the Israelites celebrated with two thanksgiving choirs. "All that day they offered great sacrifices and rejoiced, for God had made them rejoice with great joy; so that the joy of Jerusalem was heard afar off" (Nehemiah 12:43).

They did not rejoice only because human nature rejoices in rebuilding. They had a spiritual joy. "God made them rejoice."

I suspect that some of the joy my friends experienced during the Washington march was a joy given by God. When God decides to rebuild a nation, he unites people and pours out joy upon them.

When God decides to send his message of life throughout the world. He gathers like-minded people together and pours out a fiery unction upon them.

"When the day of Pentecost came, they were all together in one place. Suddenly a sound like the blowing of a violent wind came from heaven and filled the whole house where they were sitting. They saw what seemed to be cloven tongues of fire that came to rest on each of them. All of them were filled with the Holy Spirit and began to speak in other tongues as the Spirit enabled them" (Acts 2:1-4).

A true anointing produces: (1) increased group unity, and (2) stronger individuals  each with their own anointing (i.e., their own cloven tongue), and (3) new gifts and enablements, which break out of the box of their own private world (in this case they were speaking foreign languages.) 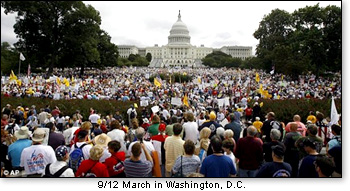 Our liberal elites produce a faux unity by crushing the individual. In contrast, the marchers on Washington seemed very individualistic in spite of their unity. The lady who sat in my living room seems to have increased her political skills. The marchers had all three things that evince a true anointing of God  unity, stronger individuals, and new capabilities enabled by grace.