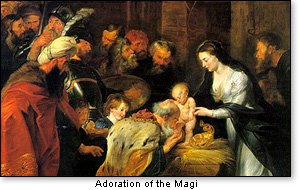 In the movie Ben Hur, one of the Persian Magi who worshipped Christ in Bethlehem returned to Judea 30 years later to see the adult messiah-king. The old Magi mentioned to Ben Hur that the Christ was close to Ben Hur in age and was geographically close to them. He added, "Our lives will never be the same again."

The traditional Feast of Epiphany (January) celebrates the "epiphany" of the Magi when they saw the Christ as a suckling baby. "Epiphany" means a manifestation or revelation or "illumination." When Christ was as a baby in the manger, he had no means of illuminating grown men except to be himself, the Christ. And what was He? He was God Almighty, the second person of the Trinity incarnate in human flesh. The unveiling of this truth to the Magi was the epiphany. They bowed and worshipped the newborn messiah-king.

The Father's act of sending His son into the world gave the world new light. God might also enlighten us as we bow before the miracle of the incarnation presented to us as a baby in a manger. We might then have an "epiphany" when we realize that he is in reality the son of God. When we realize that the Christ-child is "the brightness of His (God's glory) and the express image of His person" (Hebrews 1:2), we shall be illuminated indeed and shall want to kneel and worship him as the Magi did.

The Twelve days of Christmas

Traditionally, the Twelve Days of Christmas was a long yuletide party beginning at Christmas and ending with the feast of Epiphany on January 6. Our New Year's Eve parties are a truncated remnant of the kind of boisterous merry-making in old England which lasted 12 days. Our New Year's Eve parties are a light version of this mega-party. It should come as no surprise that the Puritan fathers outlawed the celebration of Christmas. No doubt a few of them remembered with rue from their youth in England the shocking Yuletide parties in merry old England  that is to say, drunken old England.

Subsequent to the party, they had a hangover, a headache, and bitter regrets at the feast of Epiphany, one of the holiest days of the year. Was this not the worst of times to worship the Christ-child and discover his holiness and his deity? Not at all. He left heaven's glory to enter this world's dismal gloom and was born in a putrid, filthy, and stinky stable. The holy one of heaven plunged into our vile circumstances to save polluted sinners  some of whom were repenting of their knavery after the twelve-day yuletide party. They may have reflected that he came precisely to save blackguards like them. In like manner, let our Christmas regrets be followed by Christmas times of epiphany and redemption.

The epiphany is a light shining in the darkness.

He gives light to every man

"In Him was life and the light was the life of men....That was the true light which gives light to every man coming into the world" (John 1:1). 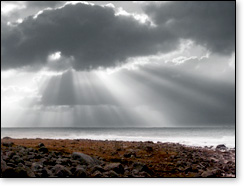 "The people who walked in darkness have seen a great light, they that dwell the land of the shadow of death, on them has light shined....For unto us a child is born, Unto us a son is given" (Isaiah 9). Before the child (the great light) was born, the world was a dark place. Therefore, I conclude that by the act of being born, Christ shined a great light into the world. I suppose that all people everywhere sensed that something had changed for the better. Millions might have had an inexplicable rush of joy.

For unto us a child is born... and His name shall be called wonderful, counselor, the mighty God, the everlasting father, the prince of peace.