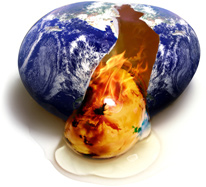 The scientists whose voices are quoted in the popular press sound like they are certain about global warming. But do they have adequate grounds for that certitude? Have they really done their homework? Or have they bypassed some inconvenient and nagging questions in their haste to prove a favorite theory? In this essay, I shall present some of those inconvenient and nagging questions. I shall play the role of the annoying gadfly — and leave it to you, my reader, to decide if the gadfly's bite opened some doors to discussion that the science establishment prefers to leave closed.

Is global warming really going on?

Allegedly, mean global temperature has risen by 1% in the last 30 years, whereas it seems to have been flat earlier in the century. Is this a case of long-term global warming, or just a short-term fluctuation caused by the sun-spot cycle? The "little ice age" lasted three or four hundred years and ended somewhere in the nineteenth century. How do we know that the present up-tick in temperatures is not the last part of our emergence from the little ice age? If the little ice age is the down side of a medium-term wave, how do we know that we are not in the up side of the same wave?

Are the measurements of mean global temperature reliable over time? If the measurements are concentrated in cities and airports of the Northern Hemisphere, does not most of the earth's surface, including the oceans, go unmeasured? Are not the brick, concrete, and asphalt cities heat retention centers and warmer than the surrounding countryside? As many cities around the world have grown very rapidly, have they not become warmer than they were thirty years ago, along with the increasing scale of their heat retention properties?

How do we differentiate a regional climate change from a global temperature change? Winds distribute heat contained in air molecules throughout the earth's surface. But this distribution of heat is seasonal, regional, uneven, and fluctuating. Most of mankind lives in the Northern Hemisphere — where most of the temperature measurements are made. The warming of the Arctic Circle has not been matched by a corresponding warming of the Antarctic Circle. Could not a minor shift in the winds account for the recent 1% increase in measured temperature in the northern latitudes?

Can carbon dioxide be the cause of global warming?

Carbon dioxide (CO2) is an invisible gas that is a product of combustion in industrial and auto emissions. It is also the natural product of oxidation of all plant and animal life. CO2 in the atmosphere seems to have been increasing since the Industrial Revolution, or so the scientists tell us. But how could they know this? If it is true, why was there no global warming in the first two-thirds of the twentieth century? Did CO2 assist in the recovery from the "little ice age"?

Is the amount of CO2 from industrial and auto emissions material relative to CO2 from forest fires and volcanic eruptions? How much of the increase of CO2 is caused by the cutting down of the tropical rain forests and the polluting of the continental shelves of the oceans? Immense amounts of CO2 are absorbed by plants of the land and the water. No life other than anaerobic microbes could exist on earth without this absorption of CO2 by plants to manufacture our carbon/oxygen-based foundation of the food chain. 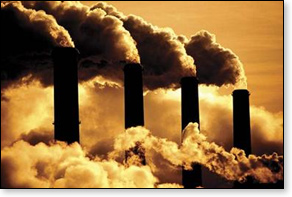 What effect do the heat retention and radiation properties of large cities, paved roads, and open farm land and fields have on mean global temperature?

Is the greenhouse analogy valid?

A greenhouse is a closed system with a rigid gatehouse for the entry of light and heat, and the exit of heat. The atmosphere of the earth is an open system of infinitely greater complexity. The wavelengths of light from sunlight more easily pass through glass than does the heat inside the greenhouse leak out from the glass. Is there anything like this at work in our atmosphere? Well, clouds seem to have this effect. Evaporated water vapor is a gas — molecules floating in the air. But the mist contained in clouds consists of very tiny droplets of liquid water. Water refracts and filters light similar to the way greenhouse glass refracts and filters light. Thus, a layer of water mist (clouds) might well have a greenhouse effect.

Does an increase in CO2 in the atmosphere increase or decrease the amount of cloud cover? Or is it indifferent to the cloud cover? How about industrial pollutants other than CO2? Remember that CO2 is an invisible, non-toxic gas. We breathe out CO2 produced by our bodies with every breath we take.

Whereas a case might be made that industrial pollutants might affect the amount of cloud cover, the burden of proof must fall on the one who claims that CO2 by itself increases the amount of cloud cover. Could not the scientists be confusing the effects of industrial pollutants with the effect of CO2 that is mingled with the industrial emissions? Again, CO2 is an invisible gas. It does not block the passage of sunlight.

Well, the thin atmosphere planet will have little for the sunlight to cut through before striking the surface. The surface will attain great extremes of heat. Rocks are capable of being rapidly heated to very high temperatures and transmitting the heat to the underlying rocks. If the atmosphere is thin, the rocks tend to retain the heat rather than give up much heat to the air. But the heat tends to remain local because thin air does not absorb much heat from the rocks or carry much heat via winds. At the same time, a thin atmosphere might more lose heat to outer space. Does this leakage of heat fully counteract the rapid heat absorption rate of allowed by the thin atmosphere?

Is the low heat absorption rate of a thick atmosphere planet offset by the high heat retention of such a planet? Not much sunlight gets through, but what gets through tends to be retained and circulated through strong winds under heavy cloud cover. Does the net effect work for warming or cooling? Does thick planetary atmosphere gas produce a warming greenhouse effect, or a cooling windy air conditioning effect, or a seasonal balance between the two? 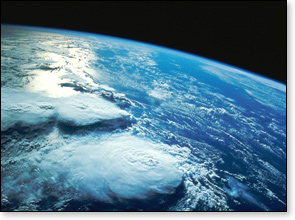 Once again, does CO2 have an effect on cloud formation? CO2 cannot precipitate as liquid or ice (dry ice) except at very low temperatures. It rarely appears naturally in clouds, and when it does it probably appears in microscopic quantities, absorbs heat from the water droplets, and quickly evaporates back into a gas. When dry ice crystals are deliberately seeded in clouds by airplanes, the chill from the crystals increases the condensation rate and the clouds release their swelling water droplets as rain — and the cloud cover decreases. But the chill of dry ice might also cause ascending water vapor to precipitate as mist — increasing cloud mass. Thus, the presence of CO2 seems to both work for and against cloud formation — but only when the upper atmosphere is extremely cold.

On earth, sunlight falling on our large oceans warms the water and produces a lot of evaporation — which cools the waters as heat is released to the water vapor. The warm water vapor rises up to the cool air at higher altitudes and precipitates as clouds of water-mist. Therefore, those of us who live in humid climates naturally associate abundant clouds with hot weather. But we forget that heat striking the water under sunny skies comes first, then evaporation is next, and finally cloud formation and overcast skies during warm humid weather. We feel hot and stuffy and blame the heavy atmospheric overcast. But the overcast shields us from the brutal heat of the sun, and influences the course of the winds. For all we know, the heavy overcast is as much our air-conditioning system as it is our heating system.

I have no idea if human-generated CO2 has any connection with global warming — and neither does our overconfident and increasingly dogmatic science establishment. Don't let them intimidate you or stop you from asking questions about their bold and hasty theories.

Like a gadfly that stings the hindquarters of a large sleepy farm horse, I have stung the powerful and complacent science establishment with my inconvenient questions. They will brush me off with a momentary pique as the farm horse brushes off the gadfly with a sweep of the tail and quickly forgets the sting. But I hope my questions arouse you, my reader, to a new independence of mind and skepticism about the latest scientific fad.