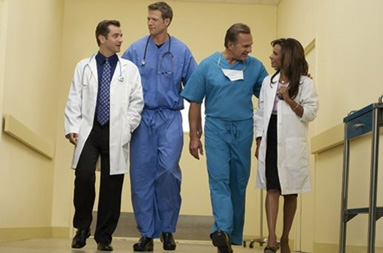 Now that the American Health Care bill is dead, it's time to re-evaluate the situation.

Few seem to be happy with the situation that exists now. Those who are on extended Medicaid or Affordable Care Act assistance wish that they were getting their insurance from an employer. There are reports that many physicians will not take Medicare or Medicaid patients, and thus, there are few choices if any for people on Medicare or Medicaid in some areas. The government cannot dictate the workings of a private business such as a doctor's practice, but doctors are licensed by state medical boards, and consumers can protest these doctors. Those who have found a good doctor who take Medicaid and Medicare pray that the situation will remain in these uncertain times.

Those who are getting their insurance from their employer complain that the premiums are too high and the deductibles are also too high, often resulting in the inability to really use the coverage at all. This leads to minor problems becoming major ones, as maintenance of chronic conditions go ignored.

Many insurance companies have left the healthcare exchange, and thus, have left people to buy insurance on their own. Again, this is a disaster because premiums and deductibles are outrageous. This is also happening for those who make too much to qualify for extended Medicaid or live in state who didn't extend the Medicaid like New Jersey. For example, in New Jersey, if an individual of age 34 wants to buy insurance for themselves, the monthly premium for a non-smoker would be about $600 per month with a $3,000 deductible before it even kicks in, and then, there are still co-pays to deal with. Many middle-class people are growing angry because they feel that they are caught up in paying for the poor while not having adequate benefits themselves. Yet, the wealthiest are not paying their fair share. The law states that everyone must have health insurance or pay a fine.

This is the insurance industry reprisal and retaliation for having to insure everyone with a condition and have no caps on that insurance. Insurance companies are in business to make money and they like to bet on younger, healthier people, and not those who are older and/or sickly.

One possible solution is that each state can cancel the license of an insurance company that doesn't want to comply with being in the healthcare exchange. An insurance company is licensed by the state in which they operate, and while they don't want to keep people in the exchange, they certainly do want to keep individual plans and corporate plans. This may sound harsh, but it may take away their power to disavow the current health care law.

The next thing to tackle is the runaway and unrealistic prices which often means buying something that is worthless. Merely having an insurance card is not coverage if you can afford the deductible and don't even go to a doctor. If someone must pay $3,000 for health care in one year, they will probably be too sick to work and pay the premiums. Then, if they live in a state with extended Medicare, they may qualify. If not, they may be out of luck. Lack of health care insurance will lead to the flooding of emergency rooms and people who do gave good insurance may be out of luck when they experience a health crises due to overcrowding and the inability to get assistance from the staff or a free bed to get into.

There is talk that more competition among health insurance companies will lower prices, but that would probably not happen if they all want to make the most profits. If an insurance company wants to operate in another state or all states, they must apply to each state Insurance Department to get it. Drug companies can sell their drugs in every state, yet they are still making billions, with the only relief coming from generic drugs.

One must question why a company like Blue Cross/Blue Shield has a different sub company in every state. For example, in New York, it is Empire Blue Cross and in New Jersey, it is called Horizon Blue Cross, and in Pennsylvania, it is called Independence Blue Cross. So, for each one of the Blues across the country, there is a different CEO and a different staff. Certainly, if they consolidated, the costs for staff and administration costs would be much less. With the aid of computer technology, it is possible to do this, at least on a regional level.

Clearly, this situation can't continue to go on in the wealthiest nation in the world. Either the insurance companies should get their prices to be affordable or we must find another alternative. They should be motivated to think of something new and creative and work with legislators to come up with a solution that would be beneficial for most people. We cannot have a society where only the rich can receive health care, and the rest are left to get sicker and die. Perhaps it's time for the government through the states to regulate the health insurance industry and Big Pharma as well. Perhaps people will turn to other holistic methods and abandon traditional medical care once and for all. Or pray not to get sick.