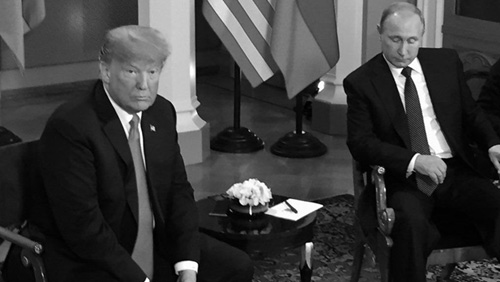 On July 17, 2018, President Trump threw America and the free world "under the bus" to please President Vladimir Putin of Russia. He again called the Mueller investigation a "witch hunt," and discredited the entire American intelligence community that stated unequivocally Russia interfered with our election, and thus threatened our Democracy. He displayed his willingness to commit treason in front of the whole world to please Putin. The big question remains "WHY?"

It is not such a wild assumption that Russia has something on Trump. It cold be the tapes that they may have taken of him with prostitutes in Moscow during the Miss USA Pageant. However, I don't think so. I believe that he has something more important on Trump and it is much older than 2013. It fact, it may go way back to 1987.

Trump first went to Russia in 1987, and shortly after that, Russians began immigrating from Russia and many moved into his apartment properties. By 1991, the predominant language that was heard in the park in the Beach Haven community in Brooklyn, New York was Russian. Perhaps he was instrumental in getting the Russian government to let people out to fill apartments with white tenants eligible for Section 8, a government rent subsidy program. He certainly didn't want Black tenants! In fact, his organization had been sued by the government for discrimination in housing for refusing to rent to Black tenants, even with good incomes. It is important to note that the Section 8 rental payments were often around three times more than what the current tenants were paying under rent stabilizing.

Perhaps he gave something of value for this favor; it could have been monetary, or it could have been allegiance? How are we to know that the Russians who did come over were not spies loyal to the Russian government? Many of them were in the Russian mob, and after only one or two years managed to become wealthy and open nightclubs and other businesses. Russians were allowed only to leave with the equivalent of $200 American dollars. However, while they were accumulating great wealth often through illegal activities, they were supported by government funds such as Section 8, welfare, food stamps, Medicaid, and training programs. It is important to note that during this time, Trump refused to rent to Americans, white or Black, but only accepted Russian tenants on Section 8. He also refused the give current tenants larger apartments. At the same time, he developed a program to run tenants out by not fixing things, not exterminating and creating a large population of roaches, mice, and rats. Thus, there was more room for Russian tenants as the older tenants vacated their apartments. This new and guaranteed cash flow greatly assisted Trump in his own ambitious plans to expand to Manhattan and beyond. Of course, he also wanted to build real estate projects in Russia and has even tried to do so while he was running for President. He has been involved with Russia si

Congress and Robert Mueller must investigate Trump's business dealings going all the way back to 1987.to fully understand the relationship of Trump and Russia, both then and now. In fact, it is critical to find and investigate many of the Russians who came over in the late 80's and early 90's to find out what they know and what they were involved with. Certainly, Brighton Beach and Beach Haven were two of the places where many Russians settled, and the area was known as "Little Odessa." The Trump Organization's office was housed in Beach Haven for many years.

Trump stated that he couldn't think of why Russia would interfere with the election. Having a sympathetic American president could negate sanctions against Russia, including the one that stopped a Russia Exxon Oil deal for $500.00 billion dollars. Clearly the appointment of Rex Tillerson, former CEO of Exxon, was a definite sign to Putin that Trump was on his side and may be able to help him.

The big question that must be answered is whether Trump agreed to become an agent for the Russian government back in 1987 for his own benefit, and has he remained so ever since. If so, Trump may have helped Putin to begin to destroy America and other democracies. This would please Putin and fulfill his dreams of expanding Russia and gain control all over the world.