Cynthia A. Janak
Fluoride - what you do not know

August 4, 2010
As you, my readers, know, I am a very curious person and when some item catches my attention I research to find all the facts. As you can see by the title Fluoride did just that. Let me tell you why. One day I was curious when brushing my teeth as to what is in my toothpaste. What caught my eye was that there was a warning on the label. That set off the red flag as to the fact that my toothpaste has the potential to be dangerous to my health. Needless to say, I finished brushing my teeth quickly and started my research.

To start with I am going to show you what is in my toothpaste.

The first and only ingredient I looked at was Sodium Flouride. The reason being is that Sodium Flouride is the reason for the Warning label on my tooth paste. Here are my findings.

Sodium fluoride is classed as toxic by both inhalation and ingestion.[7] In high enough doses, it has been shown to affect the heart and circulatory system, and the lethal dose for a 70 kg human is estimated at 510 g.[4]

I just had to find out more about this because I thought my toothpaste was safe and in essence it isn't. So why do we have fluoride in this product? I decided to go and find the history behind Fluoride and this is what I found.

This is a rather long document but very informative. I found it to be rather interesting in a couple of areas. One being that I. G. Farben is mentioned as to being given findings for evaluation for the use of pest control. Here is an excerpt.

Gerda von Krueger, one of Lange's students, became involved in fluorophosphate research as part of the work for her PhD thesis. She was able to prepare potassium and ammonium hexafluorophosphates in higher yields and forwarded some of these salts to Riedel de Haen Company for toxicological tests which showed them to be rather inert (16,17). In collaboration with Lange she also prepared a few esters of monofluorophosphoric acid and thus both felt sure the isolation of the free acid might be possible under conditions more favorable than the ones hitherto used. Upon heating silver monofluorophosphate with methyl or ethyl iodide they prepared the corresponding dialkyl monofluorophosphates which exerted a strong action on the authors: "the fumes of these compounds have a pleasant, slightly aromatic odor. But a few minutes after inhalation there's a feeling of pressure to the larynx and difficulty in breathing. Then a disturbance of consciousness develops, as well as blurred vision and a painful oversensitivity of the eyes towards light. Only after several hours the problems wear off. They are apparently not caused by acidic products of a possible decomposition but by the esters themselves. The effects are exerted by very small amounts." Several homologues have been prepared, i.e. the di-n-propyl and the di-n-butyl esters (16). The amounts of the esters to which the human organism reacts in the way described are below one milligramm (17). Lange felt these compounds might be useful for pest control and offered them to I. G. Farben Industry for evaluation. But the company apparently had no interest at that time (17a). Within two years I. G. Farben changed its mind and began its own developmental program.

What interested me here was I. G. Farben. I know that I. G. Farben was the company that did the studies at Auschwitz. The other thing that interested me was about the fumes the fumes of these compounds have a pleasant, slightly aromatic odor. But a few minutes after inhalation there's a feeling of pressure to the larynx and difficulty in breathing. I instantly thought about the gas chambers in the concentration camps. I just had to look this up to verify association.

"To whom it may concern: I, Oliver Kenneth Goff, was a member of the Communist Party and the Young Communist League from May 2, 1936 to October 9, 1939. During this period of time, I operated under the alias of John Keats and the number 18-B-2. My testimony before the Government is incorporated in Volume 9 of the Un-American Activities Report for the year 1939..."

"We discussed quite thoroughly the fluoridation of water supplies and how we were using it in Russia as a tranquilizer in the prison camps. The leaders of our school felt that if it could be induced into the American water supply, it would bring about a spirit of lethargy in the nation; where it would keep the general public docile during a steady encroachment of Communism. We also discussed the fact that keeping a store of deadly fluoride near the water reservoir would be advantageous during the time of the revolution, as it would give us opportunity to dump this poison into the water supply and either kill off the populace or threaten them with liquidation, so that they would surrender to obtain fresh water. ..."

I could not find any reference to this being used in the gas chambers but I did find the above reference to what they did with the water and how they used Fluoride as a tranquilizer.

I just had to read further because I was under the impression like all of us that Fluoride was good for better teeth and less cavities. Boy, was I wrong.

"Mr. Dickinson reveals that, "At the end of the Second World War, the United States Government sent Charles Elliot Perkins, a research worker in chemistry, biochemistry, physiology and pathology, to take charge of the vast Farben chemical plants in Germany. While there, he was told by German chemists of a scheme which had been worked out by them during the war and adopted by the German General Staff. This scheme was to control the population in any given area through mass medication of drinking water. In this scheme, sodium fluoride will in time reduce an individual's power to resist domination by slowly poisoning and narcotising a certain area of the brain, and will thus make him submissive to the will of those who wish to govern him. Both the Germans and the Russians added fluoride to the drinking water of prisoners of war to make them stupid and docile."

This just made me sit back and digest all that I have read because during the last 1012 years people in the independent media have been complaining how apathetic the people of the United States are. In the last few years they are calling the people "sheeple." Do you think this is why?

Then I had to check out to see if they were doing this in Europe. I found this nice tidbit and found that many countries in Europe do not fluoridate their water.

In Europe more than 53 million people who had water fluoridation for many years are now free from it.

4. Dentists and WHO experts have predicted a very large caries increase ("a tide of caries") after termination of fluoridation.49 Analyses of the data, however, reveal a significant decrease in dental caries (caries decline) after suspension of water fluoridation in Japan,49,54 in the Netherlands,55 in Prague,49,56 in the German Democratic Republic,49 and elsewhere. Never has any real increase in dental caries been observed after water fluoridation was discontinued.

My question now is, are there any benefits at all. I found my answer to that quickly enough. I found this gem from The National Academies Press, Health Effects of Ingested Fluoride, 1993. Just looking at the titles of the different chapters made me pause to the reason why are we drinking fluorinated water. Here are some of the chapter titles.

5. Effects of Ingested Fluoride on Renal, Gastrointestinal and Immune Systems

So I have to ask the question again as to why do we fluoridate our water. It is obvious that there are no benefits as to reducing caries (cavities), Europe is not doing it, and there are health issues so what is the upside. I personally have found no logical reason to continue to spend tax dollars on this practice.

I did find out some interesting side connections to this whole thing that I was not happy with.

The History of the

The most powerful German economic corporate emporium in the first half of this century was the Interessengemeinschaft Farben or IG Farben, for short. Interessengemeinschaft stands for "Association of Common Interests" and was nothing more than a powerful cartel of BASF, Bayer, Hoechst, and other German chemical and pharmaceutical companies. IG Farben was the single largest donor to the election campaign of Adolph Hitler. One year before Hitler seized power, IG Farben donated 400,000 marks to Hitler and his Nazi party. Accordingly, after Hitler's seizure of power, IG Farben was the single largest profiteer of the German conquest of the world, the Second World War. 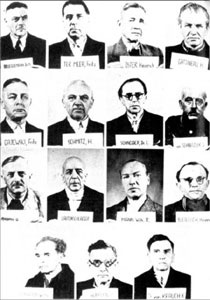 The Disgraced Managers of IG Farben

Need I say more? I do not want to but in the future I am going to see if there are any more interesting links with I. G. Farben.

Please support the efforts of the Dr. Rath Foundation for all the hard work that went into this website and insight.