The slogan for Obama's fundraisers ought to be "no limits," for it is clear that desperation for cash has become the guiding principle. The most recent example is an Obama Registry where, in lieu of putting an envelope in the bride and groom's cash bag, Obama fans can gift Obama on behalf of the newlyweds.

So what's ahead on the 'Road We've Traveled'-Obama for America fundraising?

Don't be surprised if the creative Obama 2012 team gives America an opportunity to show they care by hosting a blood drive where healthy Americans can sell their plasma and have the blood bank hand the cash directly over to Obama 2012. That's about 30 bucks a pop right there. There's still more potential to raise cash with Obama car washes, bake sales or even a carnival with cotton candy, a Ferris wheel and a dunking machine on the South Lawn of the White House.

But the fundraising effort that would certainly haul in the most cash would be a spare organ donation drive. Supporters could show their allegiance to Obama and "share the wealth" by donating a spare kidney, a lung, an ovary, cornea or even a few molars — with all the proceeds going directly to Obama for America/Obama 2012. 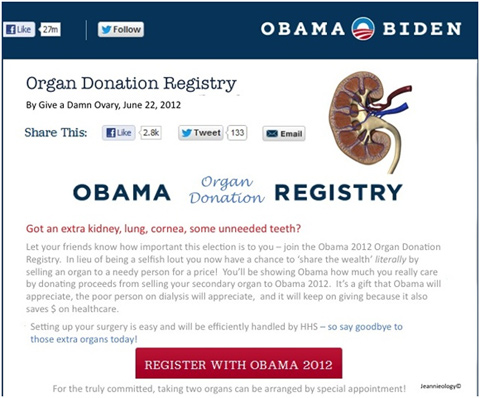 Other fertile minds are at work, going where no man has gone before, with ideas to raise Barack Bucks. At Legal Insurrection, William Jacobson features a reader's helpful suggestion:

Brides who give up their wedding gifts to Obama will be entered in a contest to win a special Barack Bouquet so that Barack can walk you down the aisle. (No, not really, but allow your imagination to roam in the age of Obama.)

He wants to be with you the whole way, because he cares that much. 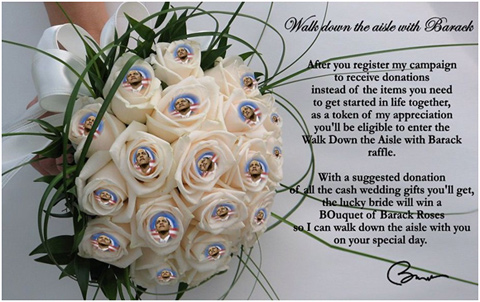 Lest any of this seems far-fetched, consider the lessons of Obama fundraising history:

There was 'Throw Bo a Bone'; multiple sessions of 'Dinner with Barack'; one very special evening of 'A New York Night' with Anna Wintour and Sarah Jessica Parker; and there was even a 'Dinner with George Clooney.'

In the Obama 2012 store.barackobama.com store they have an astonishing array of items, from "I Meow for Michelle" cat collars and "I'm Out for Obama" LGBT t-shirts to Hebrew-inscribed "Jewish Americans for Obama" t-shirts, "I Bark for Barack" car magnet, "Obama Biden Bangle Bracelets," and even an Obama Golf Divot Tool.

The president's favorite word seems to be "unprecedented." That term certainly applies to his desperation to collect money from supporters.

I am a wife, mother, and grandmother who feels it is her patriotic duty to exercise her First Amendment rights!

September 25, 2012
Sextra credit and the rehabilitation of sluts

September 15, 2012
Hillary Clinton, defender of infidelity and the killers of infidels