July 30, 2015
I write this, my friends and brothers in Christ, with a heavy heart. The first image below represents, in my view, the darkest day in the life of my Church. Throughout history there have been foolish popes, corrupt popes, and even outright bad popes. But never has there been a pope with the power and the opportunity to do so much practical and spiritual good – or harm. And here is the most troubling facet of the tragedy I am about to relate. Based upon last week's bizarre antics, I am very much afraid that this Pope does not understand the spiritual danger he is courting. The photo I referenced speaks for itself.

As Dennis Prager intimates, http://townhall.com/columnists/dennisprager/2015/07/14/the-pope-and-the-hammer-and-sickle-n2025039, there is no melding of the two most profound ideological symbols in the world today. We must each choose either the one or the other. One represents the Godhead; the other stands for man's dark and bloody struggle to supplant the grace of God with the power of the human will. As Pope Leo XIII put it, "The harvest of misery is before our eyes, and the dreadful projects of the most disastrous national upheavals are threatening us from the growing power of the socialist movement." (Quot Apostolici Muneris, December 28, 1878.) A long succession of popes have since spoken out against socialism, not because it is a flawed economic system, but rather because the mechanisms upon which it invariably relies, for instance the confiscation of private property, are intrinsically unjust. That is, while there is evil in the abuse of capitalism, the evil of socialism is most pronounced in its purest implementation. 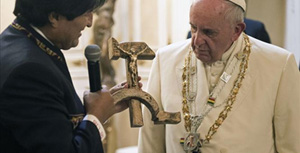 Unfortunately, the present Vicar of Christ does not seem able to understand this, does not seem even to recognize that these warring images he has allowed to be draped upon himself are morally and practically incompatible. Otherwise, how could he accept and wear the blasphemous emblem which hangs from his neck? (Recall that blasphemy often consists simply in the insinuation that God supports something that is evil.) How would this Pope feel about an image of Jesus crucified on that other iconic symbol of state socialist depravity, the swastika? Would he wear it? Would the word "blasphemy" be too harsh in that case? For that matter, how would Pope Francis feel about an image of Christ crucified on a Confederate battle flag? Somehow I cannot picture this Pope whistling Dixie.

As I look in bewilderment at this image, I cannot help but see Christ crucified again – this time on a hammer and sickle. There He hangs, along with some 100 million other souls (https://en.wikipedia.org/wiki/Mass_killings_under_Communist_regimes) who, in spite of the Church's many warnings, fell prey during the last century to that diabolical ideology upon whose logo Jesus is here shown pinned. Is Pope Francis oblivious to the rather obvious implications of the stupefying new emblem he wears? How can he not see, beneath the outstretched arms of his savior, the sign of the beast? Evo Morales, the Bolivian dictator shown here presenting the grotesquely discordant medallion (and statue) to the pope, bears upon his breast the visage of that celebrated Stalinist murderer Che Guevara, whose words yet ring triumphant through the halls of hell? "Hatred is the central element of our struggle! Hatred so violent that it propels a human being beyond his natural limitations, making him a killing machine." "I am not Christ," Guevara confided to his mother. "I am the contrary of Christ." "In fact," he vowed, "if Christ himself stood in my way, I, like Nietzsche, would not hesitate to squish him like a worm." What did the Pope see, that I do not see, in the eyes of "Friend" Guevara as they stared vacantly at him from the breast of Morales? 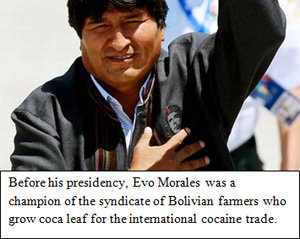 To be clear on this point, Evo Morales himself is no friend of the Catholic Church, which he has identified as his "main enemy." (Telegraph, July 15, 2015.) But why not! This cocalero * comrade of the tin roof has made no secret of his affection toward Bolshevism. In his own words: "I want to say to the members of the OAS (Organization of American States) here, I want to declare myself a Marxist, Leninist, Communist, Socialist...." (Links International Journal of Socialist Renewal, April 16, 2009. See also CNN.) Under the Morales regime, Bolivia is the poorest country in Latin America, and number 15 on the list of the world's most repressive nations.

How can Pope Francis not see, across the universe, that the Cross and Babel stand at opposite poles? On the one hand Marx: "I wish to avenge myself against the one who rules above." On the other hand Christ: "Father, let not my will but Thine be done!" A lion may one day lay down with the Lamb. But not this lion! This lion prowls around like a roaring devil, seeking someone to devour. (1 Peter 5:8)

And yet the Pope accepted the mongrelized crucifix offered to him by this avowed enemy of his Church, and even went so far as to deny that the sacrilegious presentation was an affront. "I understand this work," he said, suggesting that we should view the execrable icon not as political symbolism but merely as a work of art. (Like Sorano's "Piss Christ?") "For me it wasn't an offense," he assured us. Pope Francis then took the doubly tortured image of Jesus home with him, and after celebrating mass "offered it to the Madonna." (Associated Press, July 10, 2015.) But I wonder. Did the Pope offer this image to the same Madonna who at Fatima in 1915, before the agents of Marxism had seduced a single nation, warned us that the great danger the world would soon face was "the struggle of atheistic Communism against the Church and against Christians...?" (Congregation for the Doctrine of the Faith, The Message of Fatima, http://www.vatican.va/roman_curia/congregations/cfaith/documents/rc_con_cfaith_doc_20000626_message-fatima_en.html.) I am not a promoter of miraculous signs. But if ever a statue had reason to weep...!

So you choose! Would you wear this emblem? Would you present it to Jesus at the last judgment? Can you think of two images more inimical to one another than these, more impossible to reconcile, or when thus forged in combination more offensive to God?

Catholic writer Pat Buchanan also makes some insightful observations on this sad situation, noting in particular that the Pope accepted this token in the context of directing still more negative commentary toward capitalism. Buchanan highlights what we all know, that the Pope has no alternative to offer to the free market and no defense for the horrors of Karl Marx's self-avowedly materialistic alternative. As consolation Buchanan then notes hollowly that a pope has no special competence in "politics or climate" (or by inference, in economics). http://townhall.com/columnists/patbuchanan/2015/07/14/is-capitalism-diabolic-n2024927. But how reassuring is that? While it is true that the Pope has no special expertise or charism in these fields, it is nevertheless undeniable that he has an enormous following. This leaves faithful Catholics in a predicament. Loyalty to God's law or to man's politics? Fidelity to the Body of Christ, or to the dialectical materialism symbolically validated by its appointed head?

This is a dilemma I had hoped never to witness. I had always expected and prayed for popes wise enough that these alternatives would remain one and the same. But to deny the manifest contradiction which forces us now to choose, to deny it simply because it is so troubling, that is itself a choice. It is a cowardly choice. It is a washing of hands. It is the head-in-the-sand denial of a moral enabler, of the willfully naïve, of the incrementally corrupt. It may not be eating the devil, but it is certainly drinking his broth. If the pope is as holy a man as I believe he is, and if he is as wrong as I consider him to be in this matter, then upon that realization he would be the first to call upon us to take a stand against the abomination he has implicitly endorsed. Loyalty, yes! But always the higher loyalty!

I do not mean to say that Catholics should reject this Pope in his legitimate and Christ-appointed role. Quite the contrary! However wrong he may be in these secular matters, he remains the Vicar of Christ with all the dignity and every authority that entails. But Christ was not a politician or an economist, and He made clear that His kingdom was not of this world. Pope Francis has shown himself to be a manifest utopian willing to associate free market private capitalism with, as he put it, the "dung of the devil." And now he has also demonstrated that he is entirely comfortable with that tyrannical form of state monopoly that has accounted for more human misery than any other system in history.

Is there another way of interpreting the confounding image he has so consciously presented to us, an image that his own Vatican photographers eagerly presented to the world? Is there any alternate conclusion we could reasonably reach from this widely publicized bit of theater art, other than that the leader of the Catholic Church has endorsed Marxist Communism? Does Pope Francis not realize that the foremost objective of the hammer and sickle is first to bind Christ to itself, and then ultimately to create a world altogether without Christ so that the state can be our god? As Bruce Bialosky neatly put it, this Pope "is expediting his own Church's execution." (http://townhall.com/columnists/brucebialosky/2015/07/19/say-it-aint-so-pope-n2026626/page/2).

While my heart longs for another interpretation of this pope's words and actions, my common sense can find none. So the upshot is this: In my view Pope Francis has lent his image and his office to the Gulag Archipelago. And now I am left with only the forlorn hope, buoyed by my own previous observations that this Pope is politically naïve, that he does not realize the significance of what he has done. In the face of this – of what seems to me a shattering if hapless infidelity – I cannot in good conscience remain silent. Even as I redouble my prayers for this Pope, and even as I credit him with good faith in his error, I must oppose with all my being the horrid despotism with which he has so deliberately associated himself.

I hope that I am wrong. I pray that I am wrong, that I have been caught up in some appalling delusion from which I may yet be rescued. I am open to such a possibility, and in all humility I would welcome any proof of it. So if you believe I am wrong, dear friend, I implore you to show me exactly how I have been led astray. That would be a true blessing.