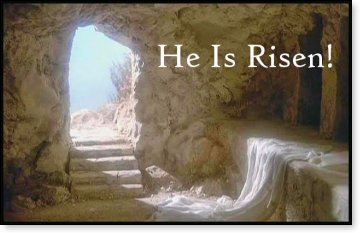 This Holy Week, I am brought in mind of my Easter reflection from a few years ago, in which I cited a prominent religious spokesman:


Asked who would be considered conservative Christian leaders today – with [Rev. Billy] Graham in his 90s and the recent death of Jerry Falwell – [the spokesman] said that "leaders are leaders because people follow them."


Upon such a low standard of "leadership," is it any wonder the future of America teeters on the abyss?

Every year, as we approach the commemoration of Christ's passion, crucifixion, and resurrection, Christians recall His triumphal entry into Jerusalem:


And the most part of the multitude spread their garments in the way; others cut branches from the trees, and spread them in the way. And the multitudes that went before him, and that followed, cried, saying, Hosanna to the son of David: Blessed is he that cometh in the name of the Lord; Hosanna in the highest.


Judging by the multitudes that followed Him, and according to the religious spokesman cited above, in this grand triumphal entry Jesus was a leader.

But after He drove the money lenders from the Temple, confounded the elders, scribes, and Pharisees who sought to entrap Him, and generally comported Himself so as to rouse their anger, apparent admirers became opponents, and His enemies resolved to kill Him.

So "Judas, one of the twelve, came, and with him a great multitude with swords and staves, from the chief priest and elders of the people...and laid hands on Jesus, and took him.... Then all the disciples left him, and fled." There followed the famous episode in which even Peter – so solid in faith that his Christ-given name signifies the stones that, when all men are silent, testify to truth – denies Him.

In the moment of this desertion, was Jesus a leader?

Eventually, when Christ is taken before Pilate, an election is held. The Roman governor allows the multitudes to choose between Jesus and Barabbas, as to which shall be punished and which shall be spared. "Now the chief priests and the elders persuaded the multitudes that they should ask for Barabbas and destroy Jesus." So they did, and Pilate released Barabbas, "but Jesus he scourged and delivered to be crucified."

In this moment of human election (choice), when all but a few had fled, when Jesus seemed to stand alone in the midst of a great multitude who were willing that He should be crucified – judging by the multitude, and the words of the religious figure cited above, was Jesus a leader?

It is unsurprising that in a land where democratic election is the ultimate norm of human authority, people should be impressed by a multitude of followers. The experience of Christ does not simply invalidate this impression, for truth moves the multitude of God's creation. But hearts broken by the crying truth of the innocent Christ crucified – hearts admitting in that brokenness the Lord of their salvation – such hearts have through all the generations since testified that in the darkest moment, when the multitudes had fled or turned against Him, Jesus was a leader, the Leader for All Creation, whose leadership still calls through all the centuries of time, in living confirmation that He Is Risen from the dead.

The religious leader quoted above was asked to name other Christian leaders. The standard of his selection was the choice of the multitudes. By that standard he may be right or wrong in what he said. But is the standard he chose the Christian standard, the standard raised for our consideration by our remembrance of Christ? With many or few, or alone in agony as His disciples slept, Jesus leads us to God, whether or not in multitudes we follow Him.

But those who do take up their cross and truly follow where He leads, those who keep faith – are they not the true Christian leaders? Are they not Christian leaders who follow Him, many or few or alone if they must; known as such most certainly by the One they follow, not so much by how many follow them? For, like Jesus in the moment of His death, isn't that in the hands of God? (John 6:37, 44)

Happy Easter. He is Risen. Alleluia!