July 11, 2016
In the wake of the massacre of five Dallas, Texas, policemen, with seven shot and wounded, President Barack Hussein Obama, as he has with his Muslim brothers, refused to refer to this heinous crime as a "hate crime" – despite the fact the shooter had admitted that he wanted to kill whites and in particular white cops, motivated by the hateful anti-white rhetoric spewed forth by Black Lives Matter and thus by extension the support this insidious group has gotten from Obama himself.

Not only does Obama have blood on his hands as having encouraged if not furthered this hate crime against whites and white cops, but so too does his "soul brothers," the virulent anti-white, anti-Semitic and anti-Christian so-called Rev. Louis Farrakhan, leader of the Nation of Islam, and his co-enablers like another so-called reverend, Al Sharpton, a charlatan and white hater. Indeed, Obama has, as usual, chosen to associate himself with these lowlifes in his quest to ram his latent hatred of whites, Jews and Christians down everyone's throats. When the leader of the United States and supposedly the Western world, who was born to a Muslim father, schooled in Muslim schools, and has close ties to black-Muslim leaders like Farrakhan seeks to incite violence by virtue of his running interference for Muslims and blacks who are not even representative of African-Americans generally, it's no wonder Obama-inspired massacres like Dallas happen. In two words, "Obama Happens!" 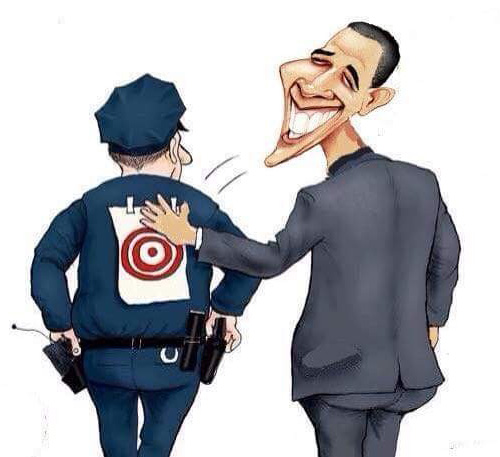 For a long time, as a law enforcement officer myself – I am a former federal prosecutor for the U.S. Department of Justice when it still had an ounce of integrity, and the founder of both Judicial Watch and Freedom Watch, as well as a former candidate for the U.S. Senate in Florida – I have been contemplating when and how to bring legal actions against white, Jewish and Christian haters like Obama, Farrakhan, Sharpton and Black Lives Matter. For the past seven years, Obama and company have been whipping up reverse racism against non-blacks and non-Muslims as payback for years of discrimination. These vigilantes are not cut from the same virtuous cloth as a well-intentioned and genuine reverend, Martin Luther King, who used peaceful non-violence to further freedom for African-Americans and others. For Obama and the others to equate themselves with King is a blasphemy. Obama may think and act as if he is a "king," but he is no Martin Luther King. In his going on eight years in power, he and his racist comrades have not only set back the significant gains Martin Luther King worked for and went a long way to obtain in uniting the races; to the contrary they have stoked and ignited what now is looking like an all out "race war."

It is no wonder some cops, fearing for their lives in this anti-white, anti-Semitic and anti-Christian environment, sometimes are prone to literally pull the trigger too quickly. With the hateful mood created by Obama and company, they understandably think that armed blacks who refuse to recognize their law enforcement powers may be out to off them. Indeed, most policemen these days, as I know many, believe that if they get in-between black-on-black violence – which has exploded under Obama – to try to protect blacks, they will be blamed if something goes awry. For this reason, their approach these days is to essentially let blacks kill fellow blacks and then only step in to clean up the carnage. Indeed, this has been the sad history of the last years, with the president blaming white cops and other non-blacks, but never expressing any concern for whites, including Jews and Christians who are killed by black racists or Muslims. (This comes as no surprise, since Obama is both.) Importantly, as is true with black-on-black crime, crimes by blacks against whites dwarf crimes by white cops and whites against blacks. But the president never sees fit to cite this incontrovertible statistic. It is simply an inconvenient truth in his quest to ignite a race war, which outrageously he has now finally succeeded at doing.

To make matters worse, Obama's so-called opponents, the same Republican establishment seeking to take the legitimate presidential nomination away from Donald Trump, has rolled over to King Obama. Afraid that they will characteristically be branded as racists against blacks and Muslims, they essentially have said and done nothing to address, quell and remedy the hatred that resulted Thursday in the bloody Dallas massacre, among other similar but smaller massacres throughout Obama's presidency.

That is why We the People must now act on our own, as we did in 1776 against another despot king. But like the real king, Martin Luther King, I have advocated peaceful means to effect change. To this end, I am filing in the next day a lawsuit, with myself as the initial plaintiff, against Obama, Black Lives Matter, Farrakhan and Sharpton for endangering not just my life, as a white law enforcement person of Jewish origin, but also for all Americans, white, black, yellow or brown, no matter what their race or religion. Someone has to take the first step, and I have concluded it has to be me. It is hoped that other law enforcement persons, including the cops in the Dallas Police Department, will later join me as plaintiffs. The case will be filed in the U.S. District Court for the Northern District of Texas, which is where Dallas is located.

Our Founding Fathers risked their sacred honor, fortunes and lives to found a great and free nation, just as Rev. Martin Luther King did in the early 1960s to preserve this freedom for all people, not just his people. The least the rest of us can do is to put our foot down and try to use the legal system to seek justice against the instigators of this new race war, which threatens to pull apart America as it was conceived of and founded. If this does not work, then other legal measures will be considered and must be implemented, so help us God.

But for now, I urge patriots who have the courage not to be afraid to come forward and join the legal action I will file in the next day. You may contact me at leklayman@yahoo.com or though www.freedomwatchusa.org.