Larry Klayman
Democrats fail at 'putting lipstick on a pig'

August 1, 2016
As I describe in my autobiography, "Whores: Why and How I Came to Fight the Establishment," when I was a boy I worked in my family's pork-packing plant owned by my grandfather, Isadore, my dad, Herman, and my uncle, Benny Klayman. My friends used to ask me why a Jewish family would "make bacon." Jokingly, I would respond, "We wanted to kill all the pigs." I was a "teenage butcher," and proud of it. 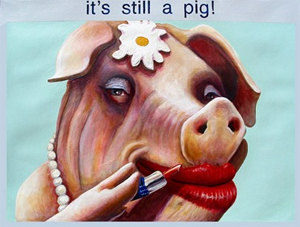 In my book, I also joked that my days laboring in a slaughterhouse, equipped with a white coat, "combat boots" and sharp knives prepared me to take on the Washington, D.C., establishment and, in particular, the Bonnie and Clyde of American politics, Bill and Hillary Clinton. Of all of the corruption in the nation's capital for the last 24 years since they assumed the throne in 1992 as the president and first lady, these two villains held the world indoor record for deceit and felonious conduct; that is until one Barack Hussein Obama, the "Muslim king," assumed power in 2008. Now, the three of them are engaged in tie for the worst of the worst that infests the country's body politic. To claim continuing power over We the People, these evildoers have now joined forces, as evidenced at the Democratic National Convention this week, regrettably in my native city of Philadelphia. Ironically, this is the same city where my family had its pork-packing plant on Tacony Street, located on the banks of the same Delaware River that Gen. George Washington crossed on Christmas to win his first major victory against a surprised British legion in Trenton, New Jersey.

For four long days this week, the American people witnessed a spectacle in Philadelphia at the Wells Fargo arena, where the Democrats tried to recast the Wicked Witch of the Left as a solid mainstream citizen out for our interests. While the oratory was lofty – even Obama's younger clone, Cory Booker, former mayor of Newark and now senator from New Jersey, sounded eloquent – the hard reality is that these advocates for Hillary Clinton were either reverse racists, atheists, socialists, pro-illegal immigration activists, anti-Semitic anti-Israel agitators, and radical gay, lesbian and transgender leaders.

Indeed, peeling back the lofty rhetoric with the theme of "We are Stronger Together," the veneer of the event more resembled a freak show than serious political discourse. When speaker after speaker implored the people to "rise together and not go low" – a not too veiled reference to presidential candidate Donald Trump – I had to think that they were referring to my ancient namesake Lazarus – my Hebrew name is Lazar (i.e. Larry) – who arose from the dead. That is because the country is indeed nearly dead, thanks to the policies and actions of the likes of the Clintons and Obamas.

Just last Thursday, another law enforcement officer was killed and another wounded in San Diego. This is a testament to the state of the nation – where reverse racism, reverse sexism, reverse capitalism and free-market economics, anti-legal immigration, pro-Muslim and pro-Palestinian sympathies and not too latent anti-Semitism and anti-Christianity against Jews, Christians and Israel – the home of both Moses and Jesus – have dominated the stepped-up but disguised mantra of the left.

So after all of this propaganda for three days, when, with great fanfare and American flags waving profusely in the audience, the Wicked Witch of the Left finally took to the stage last Thursday evening, following an introduction by one of her two major partners in crime along with "Slick Willy," her daughter, Chelsea Clinton – who not coincidentally is a director for that racketeering enterprise known as the Clinton Foundation – I had to register a terse cynical laugh. It reminded me of my days in the pig pens of my family's pork plant, hearing all the little piggies squeal on their way to being made into bacon. As Gov. Sarah Palin once said, "You can't put lipstick a pig!"

And that is precisely what Hillary attempted to do, in her own criminally minded and deceptive dressing room. There was obviously no mention of the 40-plus scandals during the Clinton administration, and the current email and Benghazi scandals, to name just a few. Obviously, references to this criminality would not be good for the "pork business." The most serious of these scandals was one I principally triggered while at Judicial Watch in the late 1990s – the so-called Chinagate. In this campaign finance scandal, Bonnie and Clyde, to win re-election in 1996, took under-the-table illegal campaign contributions from the Communist Chinese. To return the "favor," they gave away national security secrets to the Chinese, including but not limited to secrets about U.S. long-range missile technology – allowing China to more accurately target its nuclear arsenal on major American cities within range, such as Los Angeles. So when the Wicked Witch excoriated Donald Trump for not being fit, and thus a risk, to be in charge of the nation's nuclear weapons, this was the height not just of hypocrisy but also complete dishonesty.

And, going on in her speech to wrap herself in and embrace the policies of the Muslim king to try to co-opt voting African-Americans, illegal immigrants and the like, the lipstick on the corrupt former first lady, senator and secretary of state melted off. Does Hillary honestly think she can masquerade around as a champion of national security, after it turns out her classified emails on her private server are undoubtedly and predictably already in the hands of the communist Chinese Politburo, the Iranian Islamic mullahs in Tehran, Russia's Vladmir Putin, and other hostile adversaries, who are quite adept when it comes to cyber espionage?

While I will not personally endorse or oppose any political candidate for the presidency in this column, I have to be clear in any event. Hillary Clinton, the Wicked Witch of the Left, and her enablers, including the Muslim king himself – who is again bowing down on his knees as he did to the king of Saudi Arabia at the outset of his administration to have Bonnie continue his so-called legacy of destruction of the American way – has with her documented and life-threatening anti-national security policies and actions, slated all of us for slaughter to be made into bacon. And, that is why I am "squealing" this "morning after" the deceitful charade of the Democratic National Committee convention, regrettably held in the birthplace of freedom. It is in this place that a short 240 years ago, our Founding Fathers, on July 4, at Independence Hall pledged their sacred honor, fortunes and agreed to risk their lives to ironically found a "democratic" nation.

No Democrats and Hillary, given your collective history since Bill Clinton's election in 1992, you can't put lipstick on a pig!