August 29, 2016
The Wicked Witch of the Left, Hillary Clinton, does not only have the ultra-left media on her side, but the Obama Justice Department as well.

Contrary to appearances of late, Clinton- and Obama-appointed judges – particularly of the U.S. District Court for the District of Columbia – and the lawyers of the Federal Programs Branch of the U.S. Department of Justice effectively have worked in tandem over the years to "slow roll" adjudication of Freedom of Information Act Requests made by Freedom Watch, the group I also founded, Judicial Watch, and others seeking full public disclosure of the criminality of Hillary Clinton, her husband Bill, their equally corrupt daughter Chelsea, and the whole bunch of felons at the Clinton Foundation.

It's no accident that a few documents are just now coming to light concerning the sale of access to the State Department by the "Clinton Gang" – but only after the Wicked Witch and former Obama secretary of state safely secured the Democratic Party nomination for president and now appears to have an insurmountable, if not safe, lead in the polls over Republican presidential candidate Donald Trump.

Even the recent highly publicized ruling by Judge Emmet Sullivan – not coincidentally a Clinton appointee to the federal bench – to allow, after years and years, written questions to be posed to the Wicked Witch, was a sham.

Contrary to my argument to the court, since Freedom Watch had attempted to intervene in this case initially filed by Judicial Watch, Sullivan delayed his ruling and then only permitted written questioning and written responses. In this regard, any real lawyer knows that opposing lawyers – in this case the Wicked Witch's longtime fixer David Kendall of Williams and Connelly (the firm not coincidentally represents the Washington Post, which has been trying to destroy Trump at every turn) – will draft and write the answers and more likely make initial objections to slow things down further.

Thus, when Judicial Watch declares a victory, regrettably, nothing could be further from the truth. Only spontaneous oral depositions questioning by an experienced trial lawyer could potentially pin Hillary Clinton down and nail her to the wall. In short, Judge Sullivan, trying to appear as if he is furthering justice, gutted the process of prying crucial information from the horse's and principal felon's mouth.

In the context of the prophetic past deeds of the Wicked Witch's degenerate president husband, it's "clever but no cigar."

Of course, Judicial Watch's now gutted case concerned the Wicked Witch's main squeeze and aide, Huma Abadin, a Muslim Palestinian security risk (and at least nominal wife to former congressman and pervert Anthony Weiner) that is so close to the presidential nominee as to need a crow bar to separate them.

There is another FOIA case of equal and perhaps even greater importance that has been languishing for years. Filed by Freedom Watch more than three years ago, it deals with the the potential sale of waivers by then-Secretary of State Hillary Clinton to do business with the Islamic Republic of Iran, while sanctions against this terrorist regime were still in effect.

Pursuant to congressional law, only the secretary of state and the secretary of the treasury have the power to grant these waivers. Given the history of the Bonnie and Clyde of American politics having sold everything they could get their greasy hands on when they were president and first lady – from seats on Commerce Department trade missions, to overnight stays in the White House, to judgeships, to commissionerships and pardons – I thought it likely the Wicked Witch would continue this criminal practice by selling these waivers to "the highest bidders." So I filed a FOIA request that, true to Obama and Clinton State Department form, went unanswered and required me to file suit.

The case was assigned to Judge James E. Boasberg, an Obama appointee. He is the same judge, by the way, who refused in earlier cases to allow for the photograph of Osama bin Laden's body to be released to the public in another FOIA case. His decision was without legal basis but apparently merged from his great respect for Islam.

During the course of my case concerning Iranian waivers, Judge Boasberg looked the other way as the Federal Programs Branch of the Obama Justice Department claimed that its client, the State Department, could not find even one document concerning this waiver program. As a result, and despite my asking Judge Boasberg for discovery of how the department conducted its search, he happily dismissed the case on summary judgment without even one document having been produced.

Obviously, if the Wicked Witch was selling waivers in exchange for donations to the Clinton Foundation and other related recipients to do business with the mullahs in Tehran, this act of treason would have put her away at least politically for the rest of her life. Judge Boasberg and the Federal Programs Branch of the Obama Justice Department, both of whom have acted as if they are in the hip pocket of the Clintons and Obama for years, obviously knew this and acted in tandem as "Tweedledee and Tweedledum."

But now, Judge Boasberg and the other Obama- and Clinton-appointed judges of the federal court in Washington, D.C. – who have been, along with the Obama Justice Department, running interference of the Wicked Witch and Obama himself for years – have been put on the spot.

Just in the last days, the FBI, whose director took a dive over the prosecution of Hillary Clinton for the misuse of her private server in exposing classified email to foreign espionage, has been forced to reveal that it recovered more than 15,000 new emails from that private server. It is likely evidence of Hillary Clinton's sale of Iranian waivers will be found in these emails.

It is outrageous and, of course, calculated that the FBI director did not apparently allow this to be revealed sooner. Following this belated disclosure, I decided to move Judge Boasberg to reopen the case under Rule 60 of the Federal Rules of Civil Procedure, as I will other judges who precipitously dismissed FOIA cases seeking evidence of the Wicked Witch's criminal enterprise at the State Department. This can be done when there is a fraud on the court or in cases where it is in the interest of justice, which is clearly the situation here.

Predictably, the Federal Programs Branch lawyer refused, a pattern that's consistent with the Obama Justice Department's previous Clinton-Obama inspired incestuous obstruction. At the end of this column is my email to this Justice Department lackey where I set forth his ethical obligations as a government lawyer to also act in the interest of We the People.

But his refusal to do so, obviously under orders from his corrupt and dishonest supervisors, is symptomatic of the quandary we patriotic Americans face today. Coupled with the deluge of compromised and politically pliant judges like Boasberg and Sullivan, the nation is left virtually without an effective line of defense against the tyranny of political elites like the Wicked Witch and Obama himself.

Revolution is at hand, so to the barricades we must ultimately go! As Thomas Jefferson foretold, this is regrettably inevitable as the republic has fallen into an irrevocable cesspool of cancerous corruption. We the People must now, as Jefferson advocated, take strong legally defensible steps to clean house. For in the words of this greatest of Founding Fathers and later president, only when the government fears the people will there be liberty. 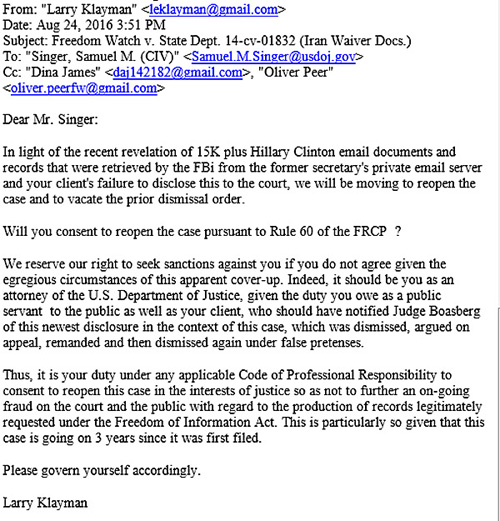