March 6, 2017
Fabrications of a link between Russia and President Donald Trump's election campaign are reaching a fevered pitch in Washington. Senate Minority Leader Chuck Schumer is demanding that Attorney General Jeff Sessions resign after only about 22 days on the job.

President Trump is aiming to drain the swamp in the District of Corruption (D.C.) and hired Sessions as the principal government leader in that effort. Well, Schumer is one of the chief alligators in that swamp. Schumer is the successor to former corrupt Senate Minority Leader Harry Reid in more ways than one, including as the chief proponent of hypocrisy and deceit. Not surprisingly, it turns out the alligators don't want to see the swamp drained.

As a former federal prosecutor of the U.S. Department of Justice, I take special interest and particular affront at watching calls for Sessions to resign. Inside the Department of Justice (DOJ), when there is no evidence whatsoever of anything to investigate much less of any wrongdoing, the DOJ I knew did not generally chase phantoms.

An honorable man and a capable leader, Sessions is learning that appeasement of the left does not work, but only encourages further attacks. President Trump's precipitous canning of Gen. Michael Flynn was a big mistake, as it has encouraged his opponents to believe Trump can be bullied into repeating that misstep. Conservatives naively keep trying to be gentlemen and ladies in what otherwise is a war zone.

President Barack Hussein Obama's attorney general, Loretta Lynch, met privately on an airport tarmac in Phoenix, Arizona, inside a private jet, with former President Bill Clinton just before a decision by the DOJ on whether to indict presidential candidate Hillary Clinton. Yet this does not bother Chuck Schumer. Obama's prior attorney general, Eric Holder, was found in contempt of Congress for illegally withholding information about Obama's "Fast and Furious" scandal running guns into Mexico to drug gangs (in the hopes of engineering an incident to help ban guns in the United States). Schumer predictably found nothing wrong with Eric Holder's felonious tenure as attorney general.

Therefore, I have launched today at Freedom Watch, the public-interest organization I founded, a series of investigations into Sen. Schumer. We will be filing Freedom of Information Act (FOIA) requests with all relevant federal and state agencies to further uncover the unethical if not criminal conduct of Session's accuser.

First, what are Schumer's ties to President Vladimir Putin and the Russian Federation? Hillary Clinton helped engineer the sale of a business to Russia, which owns 20 percent of the United States' uranium reserves. But as the senior senator from New York, who served alongside then-Sen. Hillary Clinton, also from New York (sort of), this most likely did not happen without Schumer having a hand in the sale of uranium. Therefore, Freedom Watch will find out what Schumer's role was in selling U.S. uranium to Russia, and how he likely benefited. 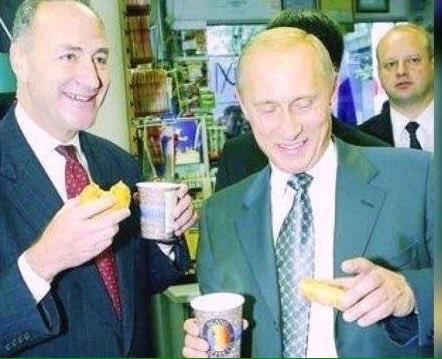 In this, we should pay special attention to the term "associates." Trump is being accused of having "associates" talk to Russia. Of course, that incredibly vague term is intended to be a dishonest type of defamation. Who or what is an "associate"? Well, we may as well explore Schumer's "associates" and find out their ties to Russia.

Second, as the Gateway Pundit reported Friday, Schumer hosted Putin in New York in 2003 at the opening of the first LUKOIL gas station in the U.S. Multiple photographs, including from the Associated Press, of Schumer and Putin are now surfacing.

But this goes deeper. Arranging for Russia's massive oil empire, chiefly LUKOIL, to open up in New York state surely required a great deal of government maneuvering, meaning "grease," by the senior senator from New York, Chuck Schumer. What deals were struck between Putin and Schumer to get Russia's premiere oil company to do business in New York? How did the current minority leader of the U.S. Senate get LUKOIL through regulatory hurdles, environmental regulation, etc.? It is hard for a U.S. citizen to start a business. But Russia had no problem opening up gas stations in Schumer's home state?

The public has a right to know all the facts. What favors did Schumer receive from Russia? Schumer implies that Russia is corrupt and engages in payoffs. Why is Schumer so convinced of that, after personally doing deals with Putin to bring LUKOIL to New York? New York state has an enormous ethnic Russian population, including at Brighton Beach. New York City even has its own Russian-language radio station. What are Schumer's connections to the Kremlin, through the large Russian constituency in his home state?

It is ironic and more than hypocritical that Schumer and his leftist comrades, like Obama, Nancy Pelosi, Bernie Sanders, Elizabeth Warren, Holder, the ACLU, George Soros and other socialist agitators and counter-revolutionaries, are so exercised over Trump's contacts with Russia. In reality, these leftists feel more affinity to the former Soviet Union and now Russia than this country. Bernie even took his honeymoon in Moscow, the mecca of the left.

Third, Schumer helped cause the collapse of IndyMac Bank, which was a primary trigger of the 2008 collapse of the housing market and mortgage industry and resulting economic crisis. Schumer's (unnecessarily) public letter claiming that IndyMac was insolvent helped spark a panic that created a self-fulfilling prophesy. We will find out what Schumer did to help create the worst economic collapse since President Carter.

Fourth, Schumer helped spark the inquisition of tea party groups. Schumer's public letter to the Internal Revenue Service urged a redefinition of 501(c)(4) organizations to target conservative public-policy efforts. Lois Lerner and others implemented that detailed attack in persecuting tea party and other conservative organizations. We will demand all documents of Schumer's involvement in attacking the First Amendment rights of U.S. citizens.

We will find out how Schumer and Schumer's "associates" and campaign contributors benefited.

Freedom Watch and I will use the Freedom of Information Act and other investigative means to dig up all of the sordid leftist sleaze about Schumer and his friends. And our new fine attorney general, Jeff Sessions, can assist us in this regard, by first and foremost cleaning out the dishonest crowd of attorneys in the DOJ's Federal Programs Branch, which has run interference for the Clinton and Obama administrations by unethically obstructing FOIA requesters in the past.

A new day has dawned in Washington, D.C., and We the People must legally take down the evil forces of the left, before they totally destroy the work of our Founding Fathers. It's either them or us; the two of us cannot live side by side, as the likes of Senate Minority Leader Chuck Schumer have ignited a war! Either we must win this war now, or the republic as created in 1776 will not survive!