November 14, 2017
Late Thursday I filed a lawsuit against Attorney General Jeff Sessions and FBI Director Christopher Wray in their official capacities, the Department of Justice's (DOJ) Office of Professional Responsibility (OPR) and the Inspector General (IG) over their failure to conduct an investigation into the bad faith and gross prosecutorial abuse by federal prosecutors and the destruction and hiding of material exculpatory evidence by the DOJ, FBI and Bureau of Land Management (BLM) in the ongoing criminal prosecution of Cliven Bundy and his sons Ryan and Ammon. The case was filed in the U.S. District Court for the District of Columbia (Case No. 1:17-cv-02429). Today, I will be filing a motion to have the case heard on an emergency basis. You can go to www.clivenbundydefensefund.org for updates. 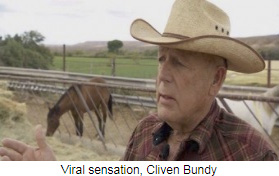 Opening arguments in this criminal prosecution of the Bundys are scheduled to begin this Tuesday, Nov. 14, 2017, in the Las Vegas federal courtroom of Chief Judge Gloria Navarro.

The complaint details how the the U.S. attorney for the District of Nevada – Obama Deep State holdovers who should have been removed by now by Attorney General Jeff Sessions – working in concert with the FBI and BLM under the Obama administration, systematically violated the constitutional rights of Cliven Bundy and the other defendants in the criminal prosecution, denying them due process, equal protection and other rights under the Constitution and the law in general. Key exculpatory evidence proving Cliven's innocence in engaging in what the Obama Justice Department called a conspiracy to threaten federal agents was shredded; material FBI 302 investigative reports were not disclosed and hidden; and the existence of three surveillance cameras showing that the Bundys surrounded government snipers positioned to possibly kill the family as they were at home were kept from defense lawyers for years. In short, the Obama Justice Department, along with its corrupt FBI then run by, you guessed it, Director James Comey, hid and/or destroyed material evidence until this obstruction of justice was discovered mostly by accident during an evidentiary hearing in the criminal prosecution just the last week.

Having learned of this criminal conduct by our own federal government under Obama on the eve of trial severely prejudices Cliven's and his sons' rights to a fair trial – as much of this evidence has yet to be produced. Defense counsel are now on the eve of trial and still do not hold "all the cards" necessary to wage a full and vigorous defense. Already, the trial judge – handpicked by the corrupt former senator from Nevada, Harry Reid, and nominated by President Obama – has done all she can do to try to insure the Bundys' conviction. She has overridden Cliven's and his sons' speedy-trial rights – the case is now nearly 2 years old – denied Cliven right to have the counsel of his choice defend him, threatened witnesses that if they testified for the defense they, too, could be indicted (this included Cliven's wife, Carol) and allowed the prosecution to bring in highly prejudicial evidence in earlier related trials and now this upcoming one, all the while banning defendants from arguing that they defended themselves from government tyranny as permitted by the Second Amendment and the Constitution. And, these are just a few of the judicial outrages.

These legal manipulations are designed to give the Obama Deep State prosecutors all they want in their leftist "jihad" to bury Cliven and his sons in federal prison for the rest of their lives. For these leftist and compromised prosecutors, and those that put them in power during the Obama administration, believe that an American citizen should never be permitted to defend his God-given constitutional rights! To the contrary, the sovereign must rule supreme, and there is no right to even question government conduct, much less to actually exercise the constitutional rights accorded to We the People by our Founding Fathers. For if this criminal prosecution had been brought by King George III in the years leading up to our American Revolution, the king's judge and his prosecutors sitting on and before the bar of the Court of Saint James would have acted similarly.

Many months earlier I had reached out to new Attorney General Sessions to review this gross misconduct, but he took no action. Instead later, after my many attempts to meet with him following a telephone conversation with him in which he committed to review the case, he told the media during a press conference he held at the U.S. Attorney's Office in Las Vegas, "I am not taking sides." What lack of courage if not cowardice by our nation's chief law enforcement officer! As a result, on behalf of Cliven Bundy, I filed a complaint before OPR and IG, which are authorized by the DOJ to conduct ethics and other investigations into misconduct by DOJ prosecutors and others employed by DOJ, which includes the FBI.

However, despite my making numerous inquiries into the existence and status of a bona fide investigation, I received no response, prompting me to file suit to force action by the defendants. The lawsuit asks the federal judge in D.C. to order an emergency investigation and once the bad faith and gross prosecutorial abuse are confirmed, order AG Sessions to withdraw the charges against Cliven Bundy and dismiss the criminal prosecution.

Bundy, his sons and their fellow defendants have been illegally held without bail in federal prisons in Nevada for over a year and nine months, and its time that justice be done. This political prosecution vindictively commenced by the Obama DOJ, at the urging of former Sen. Harry Reid who defamed Cliven Bundy and his family as "domestic terrorists," is a gross abuse of our legal system and must end now! Sessions must now have the courage to do the right thing, but if he continues to bury his head in the sand as a result of his own problems in the Russian collusion investigation of Special Counsel Robert Mueller and before Congress, the court must order him to take appropriate action, I announced after we filed suit.

Please go to www.Clivenbundydefensefund.org to learn more about this case and to support Cliven, because today it is him, but tomorrow it could be you and your loved ones who fall victim to government and judicial tyranny.