May 31, 2018
Go to www.FreedomWatchUSA.org to Sign Petition and Support Our Lawsuit to Remove Mueller. Also Donate and Share!

On Thursday, on behalf of Freedom Watch, I, as its general counsel, appeared in the court of the Honorable Emmet Sullivan, to enforce our Freedom of Information Act (FOIA) request to force Special Counsel Robert Mueller to come clean with documents that will likely show that he has been illegally and criminally leaking grand jury information to the media. The obvious intent of Mueller and his dishonest leftist prosecutors is to smear and destroy anyone around President Trump – already many Trump associates have been charged – and submit impeachment reports, which will obviously be forthcoming from what the corrupt establishments of both political parties, who want to see our president "dead and buried" and removed from office, laughably call "a man of integrity."

The hearing before Judge Sullivan, interestingly a jurist who had been appointed to the federal bench by former President Bill Clinton, resulted in his very strong ruling that Mueller and his office, as well as the Federal Bureau of Investigation, and the Department of Justice as a whole, had to produce over 10,000 documents by Sept. 4, 2018, a day after the end of the Labor Day weekend. To the contrary, the lawyers of the dishonest "Deep State" pro-Clinton and Obama Federal Programs Branch of the department had tried at the hearing to pull the proverbial wool over and lied to the court by claiming that they needed a year to review and produce what are likely to be these damning documents. They obviously, at the direction of their client Robert Mueller, in particular, attempted to obstruct justice and not have any damning information emerge until the special counsel had already completed his heinous mission: to take down the presidency by waging a legal coup d'etat!

At the outset of Thursday's hearing, I sincerely told the judge that I considered him to be an honest man, as well as nonpartisan, reminding him of my appearances before him in the famous Cheney Energy Task Force case when I was chairman and general counsel of Judicial Watch. In this context I reminded him that I, a registered Republican and a conservative, admired him, as I too am nonpartisan. I think he appreciated this and in fact, given all my criticisms of many of his Clinton- and Obama-appointed colleagues on the D.C. federal bench, it made me feel good to be able to compliment a jurist who is not from my ideological community. The transcript of the hearing can be found at www.freedomwatchusa.org.

And, as I predicted, Judge Sullivan responded in a nonpartisan fashion and ruled neutrally. This is extremely rare on the federal bench these days, no matter which president appointed the judge. There are so-called conservative federal judges who also bend the rule of law and the Constitution to suit their biases and prejudices.

The court-ordered deadline of Sept. 4, 2018, to cough up all of Mueller's and the other defendants' communications with the media is important. This will be around the time Mueller will undoubtedly be bringing more criminal charges. He will also be in high gear writing his impeachment report to Congress. Thus, the revelation of what is likely to be evidence of illegal and criminal leaks of grand jury information will give President Trump the cover to fire Mueller, or at least order Attorney General Jeff Sessions and his deputy Rod Rosenstein to do so. The result: Mueller's "witch hunt" will grind to a screeching halt, and this "man of integrity" will be relegated to the ash heap of legal history, which is where his reputation rightly belongs. Mueller and his conflicted and rabidly leftist prosecutorial staff could also be subject to criminal prosecution, once the president also fires Sessions, who is a total disgrace who simply occupies space at taxpayers' expense at my once proud alma mater, the U.S. Department of Justice.

Thus, the ramifications of Judge Sullivan's ruling are huge and more than any other legal case to date has the real potential to end the legal terrorist reign of Mueller and his staff.

And, what I appreciated as much from Thursday's hearing was that I had finally found an honest federal jurist who would enforce the rule of law in a nonpartisan way, even if he went against his own political benefactors who put him in office. We need more judges like Emmet Sullivan if we are to have any chance at keeping our republic from collapsing under a sea of corruption.

Below is a pastel drawing of this historic hearing, done by the accomplished courtroom artist William Hennessey. Save it for posterity as it will likely stand as historic proof that the rule of law can be restored in our great nation, if federal judges simply obey their oath of office and protect We the People from government tyranny.

Go to www.freedomwatchusa.org to support our legal efforts to have Mueller removed and stopped in his tracks before he and the venomous establishment fellow traitors in the "capital of corruption," aka "the swamp," destroy the miracle our Founding Fathers conceived of and created on July 4, 1776, in my birthplace of Philadelphia. 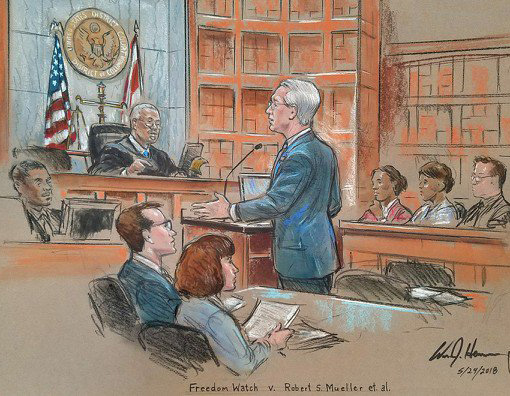