May 1, 2019
As y'all know, I am the founder of Judicial Watch and now chairman and general counsel of Freedom Watch and a former trial attorney and prosecutor for the U.S. Department of Justice. During my long legal career, I have taken on causes that were not always the percentage thing to do in terms of my own interests! I have represented clients who had been shunned by the mainstream, or as Sarah Palin calls it the lamestream media, because they told the truth and fought battles that were not popular at the time, but who also challenged accepted but phony perceptions not just in society but the conservative sub-society.

In a Washington Post Magazine cover story, the founder of this great publication, WND.com, Joseph Farah, had this to say about me to writer David Montgomery:

"Of all the people I know in the world, Larry is the one who thinks least about his own best interest. ... You can take issue with something Larry says or does, but he's not doing it for any other reason that his determined fight for justice as he sees it." [David Montgomery, "Larry Klayman v. Everyone," Washington Post Magazine, May 9, 2014.]

Lately, a client for whom I am sticking my neck out is Laura Luhn, a former Fox News producer and before that head booker who, according to our complaint, was brutally sexually abused by the now disgraced and deceased founder and former CEO of Fox News, Roger Ailes. You can read about what happened between her and Ailes on my website at larryklayman.com, as I just recently filed the complaint in my private legal capacity against the network and its current CEO, Suzanne Scott. 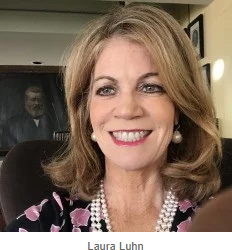 In essence, the complaint alleges that Scott was an enabler, along with now disgraced Bill Shine, to the brutal sexual abuse by Ailes and that she has been outright lying that she knew nothing about the sexual harassment of not just Laura Luhn but scores of other women at the hands of Ailes and others. In this regard, Scott's denials are not only outright false, but they cast Ms. Luhn in a false light by calling her, an understandbly traumatized woman who has been driven to attempted suicide twice in the past, a liar.

After the complaint was filed, Fox News and Scott compounded this damage when an anonymous person at the network, which is now owned by Fox Corporation, had published in the Hollywood Reporter an ad hominem attack against Ms. Luhn and me. The statement read:

Obviously, by attacking me, Fox News and Scott hoped to deflect from their own sordid past, which continues to the present. Needless to say, in bringing this case for Ms. Luhn because I think it the right thing to do, you will never have the pleasure of ever seeing me again on the network's shows. But this is my raison d'etre: Do what you think is just and right and let the chips fall where they may.

This anonymous ad hominem attack and blatantly false denial is demonstrative not only of the cowardice and lack of journalistic ethics at Fox News, but also shows why it is still seen as anti-woman. By refusing to own up to the cover-up of Ailes' sexual abuse and the enabling of his heinous actions toward Ms. Luhn and fellow women at the network, Suzanne Scott is cementing the perception that her network has not moved on from the Ailes era.

Suzanne Scott claiming that she knew nothing of Ailes' "reign of terror," which so severely harmed Ms. Luhn, is like Germans living in Munich during World War II claiming after the Holocaust that they did not know what was going on at Dachau, which was located in the heart of the city.

Ms. Scott and Fox News will now be held to account before a Washington, D.C., jury, which is likely to hold them both accountable for what they have done to Ms. Luhn, my brave client. If Scott chooses to lie and perjure herself under oath in court and on the witness stand, she will have even more severe problems, as scores of material witnesses who know the truth will be called to testify.

On my radio show this week, which you can find posted at www.freedomwatchusa.org or www.radioamerica.com, as well as the Freedom Watch TV YouTube channel, I discuss not just the Luhn case, but also the need for there to be competition in the conservative media market. Fox News, which is in my opinion neither ethical nor fair and balanced, is not the be all and end all, either for President Trump or the nation as a whole.

The American people need more independent and truly conservative media, like WND, unfiltered by political correctness and the desire to jingle advertising dollars from sponsors. If we are to save the nation from the destructive designs of the radical leftists, then we need to be able to educate the populace about the reasons this nation was founded to preserve the Divine creation and vision of our Founding Fathers.