Ever since I founded Judicial Watch, Inc., on July 29, 1994 – that is almost 27 years ago – and began by holding the Bonnie and Clyde of American politics, Bill and Hillary Clinton to task – the left has been on a jihad to either severely damage me as an activist conservative lawyer through defamatory articles and other dirty tricks, or through phony bar complaints to try to eliminate me from the practice of law. Incredibly, Tom Fitton has collaborated with the left in this latter jihad in particular.

Filing two of these phony bar complaints has been Tom Fitton, an individual who I had hired as my assistant at Judicial Watch but who with poor judgment at the time I later promoted to president, with my retaining my titles as chairman and general counsel. Notwithstanding that Fitton is not a lawyer – indeed when he interviewed with me he falsely represented that he was a college graduate, which he was not at the time – ever since I left my baby to run for the U.S. Senate in Florida in 2003, feeling insecure he then tried to harm me and my family. These two bar complaints are just a small chapter in this long saga which is still winding its way through the courts and has been ongoing for two decades.

One of Fitton’s bar complaints was over my having stepped in to represent three persons who had been harmed when I left Judicial Watch to run for the U.S. Senate in Florida. The first, Louise Benson, an elderly woman now almost ninety years old, who is like my mother, had donated $15,000.00 and pledged another $35,000.00 to a donor fund to buy the building which housed Judicial Watch. Like the other donors who donated their hard earned monies for naming rights for offices and other honoraria – a common practice for non-profits – Louise expected to have one of our offices named in her honor. She wanted to buy the rights for my office, but as someone else, Adolph Schoepe, then the owner of Fluidmaster, had purchased it first, she purchased the rights for Fitton’s office. Despite this, after I left Fitton and Judicial Watch, despite our having raised over $1,400,000 from donors to buy the building and promising in exchange naming rights and other honoraria to donors such as Louise, Judicial Watch pocketed the monies and to this day, going on twenty years later, no building has been purchased. (A review of Judicial Watch’s 990 tax return for 2019 at www.judicialwatch.org reveals that it has assets of over $172 million dollars as of that date, and likely over $200 million by 2021). Sadly, since the average age of a Judicial Watch donor was and remains over 70 years old, many of the donors are no longer alive to see the benefit of their now misappropriated contributions.

The second person is Peter Paul, who came to Judicial Watch and me because he was in fear of the Clinton Justice Department indicting him for alleged securities and bank fraud. I write about Peter in my second book, “Whores: Why and How I Came to Fight the Establishment!,” describing how Peter put on a Hollywood Tribute for then President Bill Clinton to raise money for Hillary’s then campaign for the U.S. Senate in New York. But the money which was raised, nearly $2 million dollars, so called hard money contributions, was hugely over the limit under federal law and thus criminal in nature, and the Clintons never reported it honestly in any event. Peter, having the hard proof that the Clintons has committed crimes and agreeing to come forward if we would defend him in this own criminal proceedings, Judicial Watch and I thus entered into a legal representation agreement to defend him if he would cooperate in our legal actions against the Clintons to finally, we hoped, have them held to account under the rule of law. However, when I left Judicial Watch to run for the U.S. Senate, Fitton, the non-lawyer and his “yes men,” Paul Orfanedes and Chris Farrell on the Board of Directors, who he had somehow coopted, abandoned Peter and he wound up doing ten years in prison largely as a result.

The third person is Sandra Cobas, who is like my sister and who managed the Judicial Watch Southern Regional Office in Miami, my then home city in Florida. Wanting to force out all of the regional office managers who I had hired when I left Judicial Watch to run for the U.S. Senate, Fitton put up a person who aspired to take over from Sandy, Elaine Garcia, to defame and harass Cobas, by calling her in front of other office personnel a drug addict and fat old Cuban bitch, among other ethnic and gender slurs. When I tried to resolve matters for Sandy as I was leaving, Fitton, Orfanedes and Farrell gave her the “back of their hands” and she was forced out. Sandy later became my chief of staff when I ran for the U.S. Senate in 2003-2004.

Needless to say, litigation resulted for all three persons, Louise, Peter and Sandy, through another legal counsel. But when they could no longer afford to pay this law firm, I felt duty bound to step in to try to help the pro bono, that is without charging them for my time and expense. For this, claiming that I had a conflict of interest in doing so, Fitton filed a bar complaint against me, which is now over thirteen years old. And, although it sat in the files of the District of Columbia Bar Disciplinary Counsel for many years, during a period when I was not as active as a conservative public interest advocate, it was not coincidentally cynically resurrected when I later formed Freedom Watch and held then President Barack Obama to account under the rule of law, as I had with the Clintons.

In short, the rabidly leftist DC Bar Disciplinary Counsel, which is not only now hard at their nefarious work entertaining bar complaints by a communist law professor Michael Tigar, as well as fellow leftists including former DC Bar presidents, trying to also disbar former Trump White House Counselor Kellyanne Conway, former Trump Attorney General Bill Barr, Republican Senators Ted Cruz and Josh Hawley and of course former Republican and Trump lawyer Rudy Guiliani, was happy to oblige the jealous and insecure Fitton and they became “comrades in arms” against me. To make matters more egregious, during the course of this thirteen year old bar proceeding, Fitton secretly gave DC Bar Disciplinary Counsel records from my former divorce and custody proceeding – which he took from court files – concerning my previous estranged wife, which contained proven false accusations of child sexual abuse – all to try to prejudice and harm me. This had absolutely nothing to do with Fitton’s conflict of interest allegations, but was simply hateful and vindictive.

As a result, despite the ethics opinion of the leading legal ethics expert, Professor Ronald Rotunda (SEE AND READ IT EMBEDDED BELOW), which found that I did not commit any ethics infractions and which was given to DC disciplinary authorities and later the U.S. Court of Appeals for the District of Columbia Circuit, I was suspended for three months from the practice of law in the capital of corruption, commonly known as the swamp. In this regard I am seeking reconsideration of a recent order of a Clinton appointed, very leftist and hostile judge on the D.C. Circuit, who recommended an additional three months before his court, in contravention of what other courts ruled in terms of reciprocal discipline, which I had already served.

And, if that is not enough of the damage that Fitton has done, he had also filed another bar complaint against me over my representation of Cliven Bundy before another hostile judge, Obama appointed Gloria Navarro, in a case which we ultimately won. A hearing committee, after the initial trial, could find no violation of professional ethics rules, but that did not stop Fitton from trying to have me disbarred – even with a matter that did not involve him and Judicial Watch.

The atmosphere these days in the nation’s capital is toxic and deadly, as the left now controls all three branches of our so-called government, the District of Columbia Bar as well as the courts – a left that has in nine short weeks under Biden and Harris moved the country to not just socialism but also to the brink of communism. The leftist DC Bar disciplinary apparatus is bent on destroying opposition from conservative activist lawyers and Trump backers like me, and apparently non-lawyer Fitton is happy to oblige when it comes to his feigned and feared competitor Larry Klayman – as he apparently wants to try to reduce me to his non-lawyer status, as well as harm my family and me in other ways.

And, of course, leftist fake news media is happy to jump on the bandwagon by writing defamatory articles about these phony bar proceedings. For this, the authors and their publications are being sued, as I will not turn the other cheek to their rank dishonesty. So too have leftist officials of the DC Bar Disciplinary apparatus.

Well, I have got news for Fitton and his leftist friends! Larry Klayman does not roll over! To confirm this read “It Takes a Revolution: Forget the Scandal Industry!,” which can be ordered online at BarnesandNoble.com and all major booksellers as well as www.freedomwatchua.org. 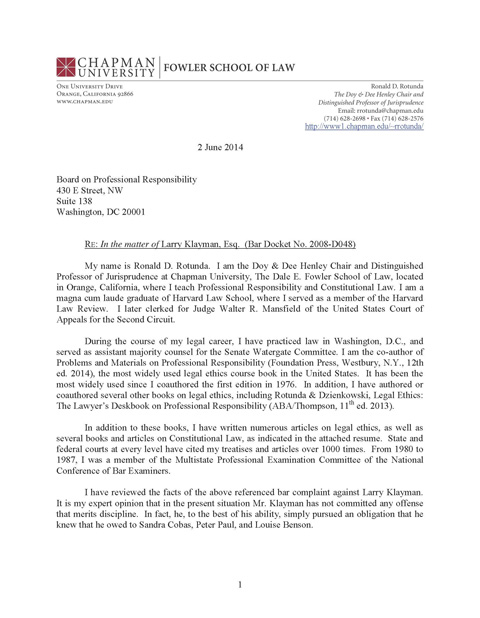