April 17, 2012
When Dan Savage isn't busy browbeating conservatives in his sex advice column Savage Love, he finds time to shepherd sex-crazed college students into his postmodern sandbox of sexual ethics on his new show, "Savage U," courtesy of that same television network that brought us such classics as The Jersey Shore and 16 and Pregnant. 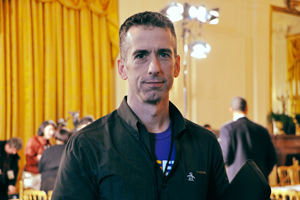 His credentials, you would think, include years of study backed by scientific inquiry and a doctorate degree. But no, Mr. Savage has none of that. What grants him legitimacy on sexual relations is his homosexual orientation.

Though he is the founder of the It Gets Better Project, an organization aimed at eliminating bullying of gay teenagers, he is also responsible for besmirching the surname of perhaps the most reputable family man in the country, Rick Santorum.

I won't go into the details of Savage's actions, frankly because they're disgusting, but if you really want to know how much of a bully he actually is, you can read about it here.

When the cameras are rolling for "Savage U," Savage is seen giving rapacious lectures to mostly white audiences about the need for them to engage in "safe sex," how pregnancy is "the ultimate sexually transmitted infection" and how it is morally acceptable to have multiple sexual partners.

Although the show is marketed as a "crash course in the real sex ed," it is, as Brent Bozell of the Media Research Center points out, "just provocative, raunchy sex chatter [that's] more entertainment than education."

Inasmuch as it may be entertaining, Savage's overarching attitude about sexual liberation is deeply disturbing. Indeed, in an age where material well being is glorified and where our bodies are viewed as nothing more than tools for pleasure, we can easily become slaves to our desires.

Think not? According to state-run media, a teenager from a poor Chinese province recently sold his kidney for an iPhone. He is now suffering from renal failure and very well may die because of it.

Although Savage believes he is doing what is right, the fact of the matter is that his advice just doesn't work. We live during a time of human history where we can insulate ourselves from the biological consequences of sex more so than ever before. But since the introduction of birth control, efforts to thwart unplanned pregnancies and sexually transmitted diseases have not been as successful as many said they would.

If I were a parent sending my son or daughter off to school this fall, I would make sure Mr. Savage isn't hosting a lecture there any time soon. His subversive speeches demonstrate the libertine philosophy that runs wild not only on college campuses but in the progressive worldview as a whole.

Take, for instance, what then Senator Obama said in 2008. "I am going to teach [Sasha and Malia] first of all about values and morals. But if they make a mistake, I don't want them punished with a baby."

I doubt the President has been to one of Savage's lectures, but it sure sounds like he's read his column.

Stephen Kokx is an adjunct professor of political science living in Grand Rapids, Michigan. He is a graduate of Aquinas College and Loyola University Chicago. Follow him on twitter @StephenKokx

May 3, 2012
Freedom and college athletics