May 3, 2012
Knowledge is not typically gained from watching young men put a ball in a hoop. But there is one storyline that has emerged from this year's college basketball season that is worth some attention: on April 17th all five starters from the champion Kentucky Wildcats — sophomores Terrence Jones and Doron Lamb and freshmen Anthony Davis, Michael Kidd-Gilchrist and Marquis Teague — declared themselves eligible for the NBA draft. 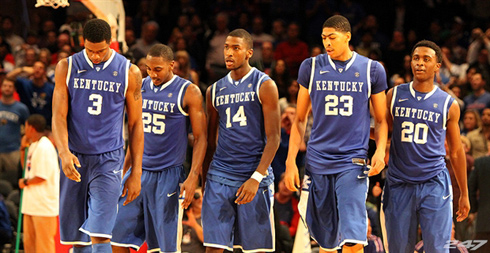 That Kentucky was the best team in the nation this year is an understatement. They compiled an astonishing 38-2 record and beat each of their six tournament foes by an average of eleven points. For a group of freshman and sophomores, that is really impressive.

But not everyone is comfortable with it.

In a scathing column written for National Review Online, NRO editor Rich Lowry contends that Kentucky's coach John Calipari attracts players to explicitly train them for the pros. His "one and done" attitude, Lowry believes, betrays a naive understanding of campus life and the importance of a formal education. It would have been better if his players "never had to play for a John Calipari in the first place."

In an interview conducted just prior to this year's championship game, Calipari stated that his legacy won't be based on how many championships he wins. It will be based on what's happened for the young people that he's coached:

family's lives, their cycle has now been broken. Can I really be looking back and say

'I had no success?' I won't do that because the success is how they're performing [now].


Although Calipari's goals are noble in that he sees himself as someone who assists (pun intended) his players in lifting their families out of poverty, he misses the larger picture.

To be sure, many former athletes receive their diploma later in life and some even find their calling in broadcasting and coaching. But without ensconcing oneself in the normalcy of campus life and interacting with their classmates and engaging in classroom discussions, these young adults are missing out on much deserved once in a lifetime experiences.

Coach Jerry York of the Boston College men's hockey team (this year's NCAA champion) was the focus of a Boston Globe article not long ago. According to the Globe, York's "old school values" and simple request that his players respect each other as well as the Boston College community at large have served as the foundation for his 18 year career, and five national championships, at "BC."

York's players are expected to keep their "faces shaved and hair trimmed and to wear coats and ties on road trips," and represent "the college with dignity and class" on and off the ice.

York regularly invites former players as well as coaches like the Patriot's Bill Belichick and the former manager of the Boston Red Sox Terry Francona to speak to his players about trust, accountability, teamwork and togetherness.

The best student athletes, according to York, don't just win titles; they graduate too.

Unfortunately, coaches like Jerry York are becoming an endangered species in the multimillion dollar business that Division I athletics has become.

The truth of the matter is that sports should be viewed, like education, as a means to an end; not the end itself. As David Brooks points out in the New York Times, if your goal is to break the cycle of poverty — ostensibly what Calipari sees himself doing — "then you have to create a complex and diverse set of positive feedback loops." In other words, "you have to flood the zone" with resources that encourage upward social mobility and individual responsibility. Sports (and money) can't be the only way out of poverty. A healthy dose of critical thinking and writing skills, coupled with a sense of moral responsibility — all of which are the typical result of a formal education — are also needed so you don't fall back into poverty.

Yes, the outlook for college graduates is horrendous this year. So I can't blame these men for pursuing a future in the lucrative world of professional sports. But in an age where complex reasoning is exceedingly rare, shouldn't universities strive to send fewer unprepared students into the world?

Stephen Kokx is an adjunct professor of political science living in Grand Rapids, Michigan. He is a graduate of Aquinas College and Loyola University Chicago. Follow him on twitter @StephenKokx

May 3, 2012
Freedom and college athletics