Kurt Kondrich
Amnesty for the unborn

October 30, 2014
There is a battle raging across this nation on the issue of amnesty for illegal immigrants, and it has become a very hot topic. Estimates for the population of illegal immigrants in the United States range from 11 million to as high as 19 million. Amnesty can be defined as "The act of an authority (as a government) by which pardon is granted to a large group of individuals." Most illegal immigrants entering this country are seeking a better LIFE, and it is amazing how a border line a person can walk across can make the difference between a LIFE of despair to one of hope. The amnesty question most certainly is an issue our nation must deal with in hopefully an effective, humane and bipartisan way, and I pray this debate will solidify in the minds of all that every human life is a precious gift.

There is another very large group of human beings seeking amnesty to live a better LIFE, and over 50 million of them have been denied a pardon and eliminated in this country since 1973. These "unborn immigrants" are seeking passage from the short distance between the womb and the outside world, and some are even terminated after they have partially crossed the LIFE line border. Who knows what gifts, knowledge, joy, and love these unborn citizens would have blessed this nation with, and maybe some were carrying the awareness of how to cure horrible diseases that plague our culture.

My amazing daughter Chloe belongs to a group of unborn citizens who are denied entrance into the world at a 90%+ rate. This is a silent genocide and these individuals bless this world with purity, unconditional love and they will never commit acts of malice, evil or destruction. We desperately need more citizens like this, and isn't it time to pardon these prenatal children targeted for termination?

Once the decision is made to deny amnesty to unborn citizens they do not have the ability to return to their previous home, and they are quickly destroyed. Isn't it time we do some real comprehensive reform and grant amnesty to the millions of unborn citizens who are in search of a better LIFE? Hasn't the time finally arrived for our nation to "Embrace and not Erase" the greatest, most priceless gift our country has ever been blessed with – Human Life!

Psalm 139:13-14 "For you created my inmost being; you knit me together in my mother's womb. I praise you because I am fearfully and wonderfully made; your works are wonderful, I know that full well. 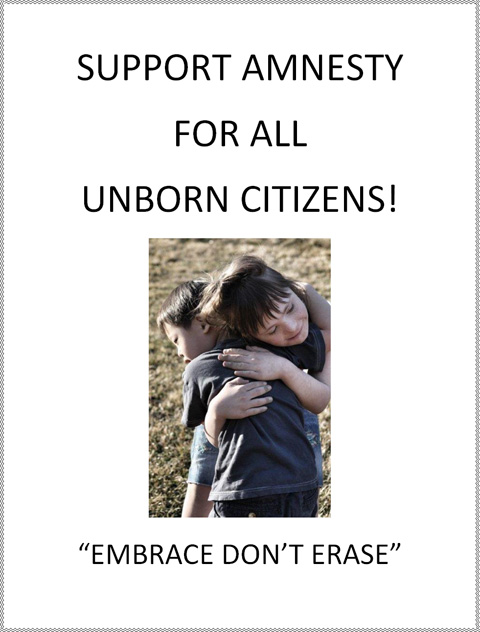