December 19, 2014
There has been much media coverage and international uproar over the release of the CIA "Torture Report," and many policymakers have expressed a high level of outrage over the tactics used to interrogate suspected terror detainees. This "torture" story occupied the headlines for several days, and the highly visible debate on all news networks will continue for an extended period.

In 2011 the state of Pennsylvania released a "torture report" that received very little coverage from the national and world press, and the details were by all standards horrific. Section 1 of this Grand Jury Report against the perpetrator Kermit Gosnell states "This case is about a doctor who killed babies and endangered women. What we mean is that he regularly and illegally delivered live, viable, babies in the third trimester of pregnancy – and then murdered these newborns by severing their spinal cords with scissors." The Grand Jury "Torture Report" continues, "Gosnell had a simple solution for the unwanted babies he delivered: he killed them." Does anyone remember this "Torture Report" being broadcasted across media airwaves? Estimates are that 100's of live birth children were tortured and murdered in this sadistic fashion, and vulnerable women suffered terrible injuries, trauma and even death.

These innocent living children were not terror suspects and committed no crimes. The only information they had to offer up was love and light. The brutal pain endured by these young defenseless American citizens as they were being slaughtered should deeply disturb the souls of all people, and yet I recall very little shock radiating from this released "Torture Report." A nation and culture that refuses to defend and protect its most helpless, unguarded citizens will continue a rapid plunge into total darkness, and I pray during this Christmas season that all people make a resolution to "Embrace not Erase" the most precious, priceless gift of all – Human LIFE! 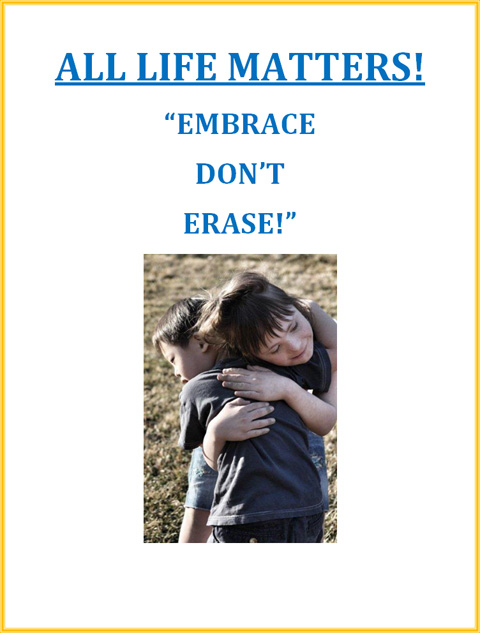