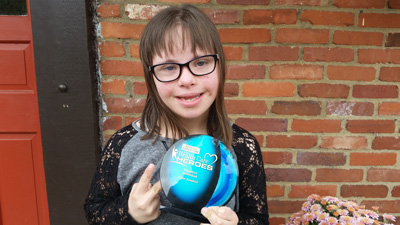 As 2015 draws to a close I have been thinking about the amazing seeds my beautiful daughter Chloe has planted during her 12 years on this earth. She has taught countless people that each human being is a priceless gift with incredible ABILITIES, and she has shown her father the true meaning of life, love and faith.

Chloe started 7th grade at her neighborhood middle school this year, and she is having an awesome year of learning and reading at grade level. Chloe participates in many community activities including baseball, volleyball, dance class, and she loves worshipping at her church. In just 12 years Chloe has been featured on and in a book, had her picture on the big screen in Times Square 3 times, appeared in 2 episodes of the national TV series "Facing Life Head On," has been featured in several magazine, newspaper and online media articles, has met many statewide and national policymakers including 5 Governors, has been on the floors of the US and PA Capitols, and she even had a law named after her, "Chloe's Law," which she signed with PA Governor Corbett. This past year Chloe was honored at a large event with the Pittsburgh Business Times Health Care Heroes Award for advocacy, and she met many Health Care leaders and innovators.

All of this would be truly remarkable for any 12 year old daughter, but I forgot to mention that my Chloe was born in 2003 with a diagnosis of Down syndrome. Early on we were told of Chloe's disability and the things she could not do, but my daughter had other plans to focus the world on her ABILITES and the bright light individuals with Down syndrome bring into this world. When I learned that up to 90% of children like Chloe are targeted and eliminated once identified prenatally I left my career as a Police Officer and made it my life's mission to serve and protect these precious amazing children.

Please take time in 2016 to connect with a person with Down syndrome, and the purity, innocence, and unconditional love they spread is something this lost culture of death, depravity and deception desperately needs. ALL Lives including Down syndrome Lives Matter!

Proverbs 14:25 "A truthful witness saves lives, but a false witness is deceitful" 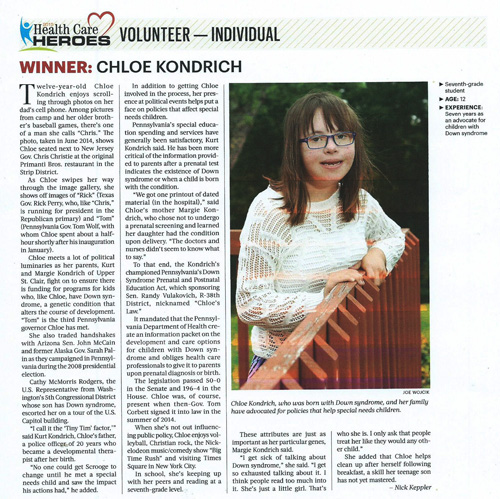