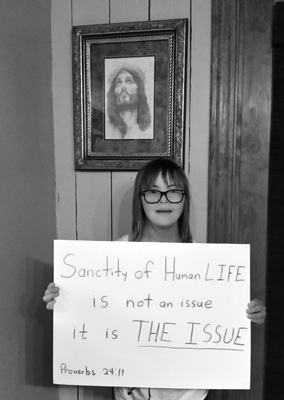 One of the signs and slogans showcased during the recent Women's March on Washington was "Well behaved women seldom make history." Women have had a priceless influence and made countless amazing contributions to our nation and culture, and none of us would be here today were it not for our mothers carrying and delivering us into this world. Many activists claim there is a war on women and they express great fear about the prolife movement to protect our most innocent and vulnerable children.

This week, on 1/27/17, there will be another March on Washington to mark the grave 44th anniversary of our country's legalizing of the slaughter of our most defenseless citizens. Since 1973, there have been close to 60 million unborn children killed, and over half of these terminated individuals have been women. Imagine all the joy, hope, light, and incredible impacts these 30+ million terminated females would have brought and shined upon our country, and think of all the doctors, teachers, leaders, mothers, sisters, CEO's, actresses, and beautiful ladies we have lost. There are areas of the world where prenatal children are identified, targeted, and executed for the offense of being a woman. Where is the fear and outcry, and where are the marches, to address this female genocide and most extreme form of social injustice and profiling? Think of the remarkable history these exterminated unborn women would have made.

I challenge women and men to join and pray for the March for Life this week in Washington. It is time to make history and end this American holocaust of our most innocent girls and boys. As Senior Director of Development at Human Coalition, I am extremely blessed with the opportunity to rescue children and serve families, and one day history will be made when abortion is unthinkable and unavailable. All of us will be held accountable to God for what we did or didn't do during our lives to rescue and protect these defenseless human beings. What will you tell your children about where you were during this moment in history?