The mission of San Diego State University shall be to provide well-balanced, high quality education for undergraduate and graduate students and to contribute to knowledge and the solution of problems through excellence and distinction in teaching, research, and service. The university shall impart an appreciation and broad understanding of human experience throughout the world and the ages.


I was thoroughly disgusted to learn that the administration of San Diego State University would sell themselves out to accommodate a culture that came to the United States not to assimilate, but to conquer. The university's mission statement, shown above, is allegedly committed to providing a high quality education, but can that be accomplished if facts and maps are changed to accommodate an Islamic greed and war tactic against Western civilizations?

SDSU's statement indicates a dedication to research, yet there was no research to ensure the map's accuracy. Rather, they off-handedly removed the State of Israel from the Middle East, the only country not conquered by Islamic force, and the only country where Christians, Jews, and Muslims live freely and, indeed, flourish.

I wonder if the instructor then passed out blank maps and crayons so that these well-trained, unwavering, strong-willed, junior jihadists might also color them to show the Islamic grip on Europe. If changing the map is considered a sign of a well-balanced education, perhaps other maps will be distributed, showing an Israel that encompasses all the warring Islamic nations. I could hardly call this a lesson in a broad understanding of human experience, unless this is the beginning of the students' employment of "excellence and distinction in research."

If the Islamists force a change of maps, consider they may also one day successfully remove (or burn) books from the library. Who will be left to teach them that there was never a Palestine, a Palestinian people, culture, language, monetary system, or ancient artifacts, until the Arabs began and lost their war of aggression against Israel in 1967? CAIR has been supplying Islamic books, gratis, to American libraries, and the Common Core Standards textbooks do contain revised historic information, propaganda and serious omissions. Because they were militarily inferior, the Arabs devised a psychological strategy to call themselves Palestinians in order to establish a heretofore non-existent tie to the land, and a propagandist story that Israel stole the land from them. I can't help but wonder if the school staff is intentionally complicit or oblivious of today's political climate.

If the professors have not yet been forced to give up the Bibles for the Qur'an, they may still learn that Palestine is never mentioned in the Bible, and the Islamists are playing a hoax on the world. Philistia was a derogatory term used by the Romans against the Jews. The Jews have been a presence in the Middle East for more than 3,000 years (the Covenant is noted in Deuteronomy 29:1-30:20), the Palestinians since 1967. The Palestine Brigade that helped England during World War II was Jews; the Arabs fought on the side of Hitler. Is the school now prepared to covet the Hitlerian-Islamist understanding of the world experience?

Islamists are killing Christians and Jews (as well as their own kind indiscriminately), usurping land now has they have for fourteen centuries – from Zoroastrians, Pharoahans, Buddhists, Hindus, Baha'is, and idol worshippers, yet teachers are aiding and abetting these jihadists who are here to change our country and our values, replace our religions with theirs, our principles with theirs. We are guided by the Biblical Commandments; they are guided by Sharia, the most violent mandate on the planet. If Americans do not stand on the side of truth and honor to save our republic, if we do not protect, even with a simple map, assure the people who worship on Saturday, that Americans will facilitate the destruction of those who worship on Sunday. The document of the Muslim Brotherhood stipulates this as their goal.

It is time for American school personnel to avail themselves of the Qur'an to learn that a whopping 80% is dedicated to the killing of the infidels, all non-Muslims. Their aspiration is to Islamize each host country and establish a Caliphate. I ask President Eliot Hirschman of SDSU (presidents.office@sdsu.edu) and personnel in all institutions of learning to recognize jihad, and protect their endangered students, themselves, their families and progeny, and our United States. Restore the map to reality or be forever subservient to those who have mastered the art of manipulation to achieve their objectives.

NOTE: Already aware that the world was round, intercontinental trade was pioneered by Persian Jews along the "Silk Route" to China in the fifth century BCE. Judaic savants were largely responsible for the origination and improvement of the instruments and astronomical tables that facilitated their circumnavigating voyages – including the astrolabe, first made circa 150 BCE in Greece. This is not the time to allow intimidation to throw us off course. 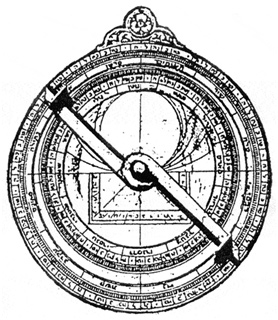 A brass astrolabe inscribed in Hebrew.