October 6, 2018
Despite the naysayers' denials, we are at war. Some cite President George H.W. Bush as the impetus when he signed UN Agenda 21 in 1992, calling it a One World Government, a la George Soros's One World Order. And with all the offenses we have seen since then, occurring more frequently now than before 9/11, we continue to misjudge our formidable foe and wait for recognizable uniforms, grander weaponry and futuristic vehicles. Rather, one facet of the war comes by small boats and on foot.

They are a ragtag army, shabby, unruly, ungovernable with no discernible leader, although they operate in unison, and occasionally accompanied by a woman and child to confuse and tug at heartstrings. Their methods are effective because our populace has been shamed into obediently accepting the concept of multiculturalism from tyrannical regimes over our own, believing that disparate, incongruent, and even conflicting ideas can suddenly and mysteriously blossom into harmony once they're embraced on Western soil.

We underestimate these people of the sand, whose accomplishments cannot be measured by our standards, cannot earn our respect or Nobel prizes, yet they nevertheless manage to achieve their undertakings, reach their objectives, and day by day, spread their influence throughout the world, poisoning and destroying all they touch. How is it that, despite their backwardness, they can infiltrate other cultures and challenge the limits of democracies, republics and kingdoms? 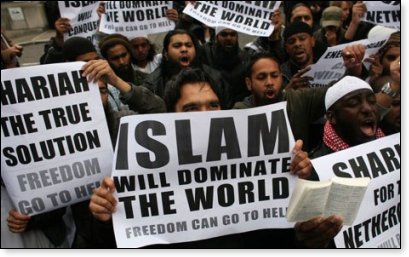 First, the populations of western countries have been prepared by a thorough indoctrination of believing themselves to be the cause of the world's woes and, therefore, the ones responsible for their welfare and apportioning our bounty.

Second, the Islamic migrants' training derives primarily from their family structure, where there is no fealty between the man and his multiple wives and concubines, who come from a background that leaves their basic human needs unmet, and continues the same ideology into the next generations. Their offspring carry the familial enmity with them and their religion/ideology promotes a deep-seated hatred from the moment they can understand language. We now also recognize that they are cast out by their families during their teen years, when they are most beset by physical, cognitive, emotional, social, sexual, and spiritual challenges. They are filled with deep frustrations and rage, prepared to overwhelm the women of the welcoming countries, while facing little opposition from the men.

Third, the migrants are menacingly – even strategically – dispersed throughout most of western Europe. France and Germany have the largest Muslim populations in Europe – 5.7 million (8.8%) in France and 5 million (6.1%) in Germany, and constitute 25.4 percent of Cyprus's population. Angela Merkel admitted that multiculturalism has "utterly failed," as mosques are replacing churches, and attacks against Jews increase. Sweden has become a "disaster, with her generous policy of mindless immigration and inability to control them, and 61 no-go zones, thus seriously endangering her citizens. At 6,620 reported rapes in 2014, an increase of 300 percent, Sweden is the Rape Capital of Europe, second only to Lesotho, Africa. The jihadi-rapists are Salafists who demand that women be veiled, disallow votes, and threaten business owners with decapitation, while the Swedish political leaders avert their attention. Britain's Muslims are responsible for kidnapping female students off the streets for sex trafficking. "Grooming gangs" abused more than 700 women and girls (sometimes boys) in North East section alone, including rape, supplying drugs and trafficking for sexual exploitation.

Fourth, by 2050, the Muslim population could double due to the overwhelmingly young male influx with high fertility rates. The welcoming European countries are over-extended with the burden of providing food, clothing, shelter, healthcare and education in the billions of Euros; and dealing with the decline of societal cohesion, neighborhoods-turned-no-go-zones, a general rise in criminality; and a rise in Islamic-style crimes of gang rape, kidnapping and sexually enslaving young women and children.

Disclaimers be damned, France's character is hanging in the balance. Her Muslim minority, now estimated at 4.2 million (5% of the population) considers itself a new nation that will emerge as an Islamic African nation in 30 years due to rampant immigration by teens and young adults with a 33% higher birthrate than the indigenous French. Their more than 700 Muslim neighborhoods are rife with riots, violence and law-breaking, unemployment, and increased Islamic identification with their women wearing the veil. Rape is up 20%. Some 500,000 Muslims are said to be converts, while, by contrast, the Catholic church and clergy are on a dramatic decline. "France is no longer France"; "Paris is no longer Paris." It is now a state of fear, with increasing Muslim assertiveness.

The French authorities, Globalists, are more than mere bystanders. They are complicit in destabilizing the values and identity of the occupied country. Nathan, France's most popular, controversial and government-funded textbook publisher, has produced books that are clearly indoctrinal. A math book last year featured a math problem about drowning migrants. This year, it produced a 32-page, sex-educational manual, "How to make babies," read by millions of children, age five and older. It contains love-making instructions and drawings of mixed-race couples, always unveiled white women with darker-skinned Arab-Muslim men – obvious thought reform. The books address "love," but there is no love in the multiple, non-consensual Islamic marriages. Neither do the textbooks address what happens to French white girls who marry the older Muslim men. When he returns with his bride to his country of origin, she faces the
The views expressed by RenewAmerica columnists are their own and do not necessarily reflect the position of RenewAmerica or its affiliates.