As children we asked the pretty nun, "How did the Blessed Mother die? Where is her body?"

Taking a deep breath, Sister Christine Joseph answered, "Mary was taken by her Son into the glory of heaven."

Sister knew her catechism well. She did not say how Mary died, nor did she speculate when, nor did she mention that Mary went 'up there' or 'down there.' Sister simply and correctly said she was "taken by her Son."

We sat in class 'alphabetically,' that is, according to our last names. My last name, 'Arthur' consigned me to the first row of old wooden desks that ran parallel to the hot water radiators along the windowed wall.

The Blessed Mother stood approximately 5 feet from my face. She was a statue, of course, and she regally stood on top of the metal radiator cover. As 'Queen of Heaven and Earth,' a gold crown lay on her lovely head.

For the next nine months, I looked at her, and she looked at me. That is when I first fell in love. The Blessed Mother captured my heart.

The Church celebrates the feast of the 'Assumption of the Blessed Virgin' or 'assumere' [1] on August 15. It has always been a Holy Day of Obligation for all Catholics.

It is interesting to note that the Orthodox and other Eastern Churches observe this feast under the title of 'The Dormition,' or 'the Falling Asleep of the All-holy Mother of God.'

Pope Pius XII in his 1950 papal bull 'Munificentissimus Deus,' infallibly defined that the 'Glorious Assumption' is divinely revealed. [2] It is therefore the fourth Marian dogma, and is an article of faith. In other words, in order to be Catholic, one must believe in this teaching.

In defining the dogma of the Assumption, Pius XII wanted to propose to the Church a renewed pledge of hope. In the Virgin risen with Christ, the Church advancing toward the Parousia [3] already has realized the consummation of its mystery. That is, one day (we pray) our bodies shall rise from their graves and be reunited with our souls in Heaven.

While the Church does not rely on direct evidence of the Assumption in the bible, it implicitly argues from Mary's fullness of grace as 'Mother of God' (Lk. 1:28). The doctrine is part of the Sacred Tradition handed down over the centuries.

Because Mary so closely shared in Christ's redemptive mission on earth, she deserved to join him also in bodily glorification.

Perhaps no other subject is spoken about with such intensity and love by Archbishop Fulton J. Sheen than that of the Blessed Mother. The Archbishop said often, "If you are devoted to Our Lady, you will never lose your soul."

Here, below, is a popular Bishop Sheen vignette. 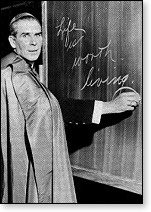 How could we fail to love her whom our Lord loved so much? It is impossible to love Christ adequately without also loving the Mother who gave Him to us.

Those who begin by ignoring her soon end by ignoring him, for the two are inseparable in the great drama of redemption.

As children who wish to influence their father go to their mother to intercede for them, so do we go to Mary.

It is absolutely impossible to convey to anyone outside the Church the filial devotion we bear that sweet Mother of Mothers.

Devotion to the Blessed Mother brought me to the discovery of a new dimension of the sacredness of suffering.

When I had open-heart surgery, only gradually did it dawn on me during my first four months in the hospital that the Blessed Mother not only gives sweets, but she also gives bitter medicine.

Seventy pints of blood [4] were poured into my body after open-heart surgery because for a long time the body refused to circulate the blood. This blood came from those who poured their own blood into the blood bank of Lenox Hill Hospital.

Too striking to be missed was that on three feast days of Our Lady, I was brought to the door of death and endured great suffering.

The first was the Feast of Our Lady of Mount Carmel, July 16, when the doctors stayed with me all day and all night trying to preserve the small flickering spark of life. Then came another operation on the Feast of her Assumption, August 15, and the implanting of a pacemaker.

By this time, I was beginning to feel a kind of holy dread of what might happen on September 8, when the Church celebrates her birthday.

Sure enough, a kidney infection developed which, over a period of several weeks, made me feel some new tortures.

As I reflected on this concomitance of the Church festivals of Mary and my enforced solidarity with the Cross, I took it as a sign of the special predilection of Mary. If the Lord called her, who 'deserved' no pain, to stand at the foot of the Cross, why should He not call me?

If I had expressed a love for her as the Mother of the Priesthood, why should she not, in maternal love, make me more like her Son by forcing me to become a victim?

Any spirituality that I have revolves around the crucifix and the price of my redemption and the assurance of my resurrection.

The pectoral cross, which I carry, is a crucifix. In my bedroom is a large crucifix about six feet high which, in my long confinement to bed, is the panorama of salvation which I gaze on during the day, and at night when waking.

In my chapel is a painting done by the cardiologist who saved my life, Dr. Simon Stertzer. It is a painting of Christ on the Cross-with a concentration on the eyes, which looks out both in pity and in love, as did the Second Look on Peter.

The second year after the open-heart surgery, because of overwork, I was confined to my bed again for many months. During that time, I instructed four converts and validated two marriages.

The horizontal apostolate may sometimes be just as effective as the vertical. [5]