Peter LaBarbera
Why are liberal 'gay' activists freaking out over a contraception case - Hobby Lobby - and should they be worried?
Court's defense of religious liberty for profit-making companies could help Christian small businessmen oppressed by "gay rights" laws

July 4, 2014
It's easy to understand why hard-core feminists with their frenzied, overblown "War on Women" rhetoric would be outraged by the Supreme Court's upholding of Hobby Lobby's right as a Christian-run corporation not to be forced to provide abortifacients to its employees through an Obamacare mandate. (See Hillary's misinformation on the decision HERE.) But why are liberal "gay" activists freaking out over the Hobby Lobby ruling? 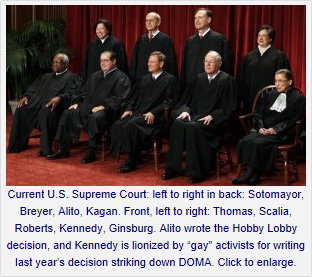 The case was never about denying women birth control, but you wouldn't know that from the "reporting" by liberal media and hyperventilating "progressive" bloggers. Hobby Lobby still provides 16 forms of birth control as a health benefit to its employees, but its founders – along with another Christian-owned corporation, Conestoga Wood Specialists – sued HHS over being forced to provide four contraceptive methods that could terminate a fertilized egg.

Hobby Lobby's founders, David and Barbara Green, are committed Christians who believe that life begins at conception and should be protected. To quote the Court decision, "Hobby Lobby's statement of purpose commits the Greens to '[h]onoring the Lord in all [they] do by operating the company in a manner consistent with Biblical principles.'" So strong is the Greens' commitment to Jesus Christ that they have lost countless millions of dollars in profits over the years by closing their 500 craft stores nationwide on Sunday.

Now, one would think that obtaining cheap, subsidized contraception would be low on the priority list for homosexuals, seeing that two men or two women by themselves cannot produce a child. Nevertheless, Big Gay Inc is in a tizzy over the Supreme Court decision – because Burwell vs. Hobby Lobby isn't really about contraceptives, but rather whether Americans like the Greens will be free to live out their religious convictions.

Immediately after the decision, feminists flew into a rage, circulating crude versions of Justice Ginsburg's dissent and distortions about women being denied birth control by their "male bosses." Too bad most Americans will never read the actual Hobby Lobby decision – which lays out two diametrically opposed, competing visions about freedom of conscience and the role of government in these United States. 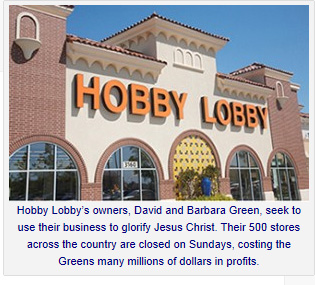 Freedom of conscience vs. Big Government

On the side of preserving and even expanding Americans' religious liberty were five judges: Alito, Kennedy, Roberts, Scalia and Thomas. In his concurring opinion Kennedy writes:


"In our constitutional tradition, freedom means that all persons have the right to believe or strive to believe in a divine creator and a divine law. For those who choose this course, free exercise is essential in preserving their own dignity and in striving for a self-definition shaped by their religious precepts. Free exercise in this sense implicates more than just freedom of belief....It means, too, the right to express those beliefs and to establish one's religious (or non-religious) self-definition in the political, civic, and economic life of our larger community."


On the other side – of Big Government overriding citizens' religious beliefs, restricting conscience exemptions to federal mandates, and putting federal power behind expanded access to entitlements – were Ginsburg, Sotomayor, Breyer and Kagan. In fact, Ginsburg spends nearly two pages in her dissent [see pp. 24-25] defending the idea that Obamacare's provision of subsidies for IUD's (intrauterine devices) – one of the four contraceptives resisted by Hobby Lobby as a potential abortifacient – is a "compelling government interest."

As much as Ginsburg believes the majority's "immoderate" reading of Religious Freedom Restoration Act (RFRA) is too broad, hers is too narrow: she ends by arguing that exemptions under the RFRA should be limited to explicitly religious organizations – leaving for-profit Christian businessmen like the Greens unprotected.

The bigger government gets – in both its "social justice" mission and the amount of goodies it gives out as "entitlements" – the greater the threat to Americans' right to freely exercise their faith. This is precisely why homosexual activists are nervous about Hobby Lobby's victory. If the nation's highest court grants that even very large "closely held" family businesses like Hobby Lobby (which has more than 13,000 employees) possess a religious liberty claim under RFRA, then surely small family businesses like Elane Photography in New Mexico – owned by Jonathan and Elaine Huguenin – should have the right not to use their creative talents to serve homosexual "weddings," which violate their Christian faith.

Sure, Justice Alito explicitly states that the Hobby Lobby decision is narrow and does not apply to exemptions from nondiscrimination laws. But reading the majority's language, it is hard to imagine that the same five Supreme Court judges would force mom-and-pop bakeries – or Christian husband-and-wife photographers like the Huguenins – to violate their faith by forcing them to participate in immoral "gay weddings."

Ginsburg, on the other hand, is quite ready to deny Christian-owned businesses the freedom to live out their convictions in the public square. Why? Because they make a profit – precisely the legal dichotomy shot down by Alito and his four allies on the Court. Ginsburg specifically cites the Elane Photography case as evidence of the slippery slope of RFRA/religious-liberty legal claims that she believes will result from the Hobby Lobby decision.

Some libertarian homosexuals like University of Minnesota law professor Dale Carpenter advocate for limited religious exemptions to pro-homosexual nondiscrimination laws. But other, left-leaning homosexual activists – far more vocal and dominant in the LGBT political sphere – are on record defending the absurd proposition that faith-impelled small businessmen who refuse to serve homosexual "weddings" are the moral equivalent of the KKK, resurrecting an "anti-gay" version of Jim Crow laws.

Because, you see, not being able to use the government to force devout Christians, Orthodox Jews, or Muslims to take pictures at or bake a cake for a homosexual "wedding" – when there are plenty of competing wedding businesses that would gladly do so – is analogous to Blacks in the 50's being denied the use of "Whites Only" public restrooms and water fountains. Right. Go ahead and try making that case to a Black American.

Homosexual militant Wayne Besen denounced Hobby Lobby as one of the worst Supreme Court decisions ever: "Because of this decision, business owners will have enormous leverage to impose their religious beliefs in the workplace, and to coerce employees into abiding by them," he warned ominously. Besen is hardly alone on the LGBT side in arguing that anyone who enters the stream of commerce – essentially every small business – should be barred legally from "discriminating" against homosexuals.

Last year, the New Mexico Supreme Court essentially agreed with Besen by unanimously upholding the Huguenin's "anti-gay discrimination" conviction (including a $6,000 fine) for politely declining to shoot photos at a lesbian "commitment ceremony." One of the justices, Richard Bosson, asserted in a concurring opinion against the Christian photographers: "In the smaller, more focused world of the marketplace, of commerce, of public accommodation, the Huguenins have to channel their conduct, not their beliefs, so as to leave space for other Americans who believe something different." That, the judge said, is the "price of citizenship."

One Nation, under Tolerance?

One wonders: Is this the same America that was founded by men and women fleeing religious persecution and government tyranny? Incidentally, the same Wayne Besen above is leading the "gay" activist crusade to ban pro-heterosexual change therapy for minors – succeeding in California and New Jersey. Besen applauded the Supreme Court for denying cert on a legal challenge to the California case, thus paving the way for the ex-"gay" therapy ban in that state. This is yet another LGBT assault on liberty, self-determination, and parental rights.

The reality is, religious and moral freedom are in grave danger in the USA. Pro-life advocates must realize that powerful homosexual groups like Human Rights Campaign – who have long worked hand-in-hand with the pro-abortion lobby – are now joining with radical feminists to deny religious Americans their right to refuse pro-abortion and pro-homosexual government mandates.

I believe Burwell vs. Hobby Lobby portends well for the right of small-business-owning traditionalists to preserve at least some of their Christian principles and integrity by not celebrating sexual immorality. However, pro-family advocates should not get too excited about the Supreme Court – which has already seriously constricted Americans' freedom to organize against pro-homosexual laws. (See Roemer v. Evans, a 1996 Court decision written by Justice Kennedy that struck down Amendment Two, a statewide measure passed by Colorado voters that barred all levels of state government from enacting "special rights" laws based on homosexuality.)

The same Justice Anthony Kennedy who sided with the Hobby Lobby majority also wrote the atrocious 5-4 decision in United States v. Windsor eviscerating DOMA , the bipartisan Defense of Marriage Act signed into law by Bill Clinton. That paved the way for pro-homosexual-"marriage" judges across the United States to overturn popular defense-of-marriage amendments and laws in one state after another, most recently in Kentucky.

Kennedy is regarded as a hero by LGBT activists, the brave enforcer of their fallacious 'homosexuality-as-a-civil-right' equation. In striking down a core provision of DOMA, he sounded like a "gay " activist as he arrogantly portrayed opponents of same-sex "marriage" – even the congressional creators of DOMA – as hateful bigots insensitive to the plight of homosexual-led families. Cleary, Kennedy believes that allowing homosexuals to "marry" is a "compelling government interest" – which is why many veteran conservative observers like Maggie Gallagher expect to see the Supreme Court nationalize "same-sex marriage" when the appeals of judicial take-downs of state marriage amendments collectively reach the Court in the not too distant future.

If Kennedy again aligns with the four judges who dissented on Hobby Lobby to create a federal "constitutional right" for homosexuals to "marry" – thus overriding those state amendments – it will mean that millions upon millions of business owners effectively would be forced to provide marital-type benefits for their homosexual employees. To many people of faith, this equates to rewarding sexual immorality with their company's hard-earned profits, of which they are stewards and through which they seek to honor God.

Christians and religious-minded citizens don't leave their faith at home or in church – and they shouldn't lose their First Amendment liberties – just because they make money. This is the essence of the Hobby Lobby decision, but how will it fare against the rapidly emerging liberal legal consensus of homosexual "marriage" as a supposed constitutionally protected "right"?

Most Americans have not thought through the far-reaching ramifications of legalizing "gay marriage." For one, every child in a public school will be taught that "marriage" between two men or two women is morally equivalent to the real thing. And if "gay" relationships are equal, according to the Left's simplistic "Love is Love" formula, then homosexual sex must be taught alongside natural sex in health classes. (Remember: we mustn't judge!) Social engineering of this sort deeply offends faith-motivated parents and it will surely lead to escalating legal challenges pitting religious freedom against "gay" activism.

The "zero-sum game" cultural war between First Amendment/religious liberties and homosexual "rights" in America will go on for decades. Homosexual activist lawyers are playing for keeps and expect to win. We should be thankful for the Hobby Lobby victory, but sober about the direction of U.S. courts. For as the Greens, Huguenins, and many others like them have learned the hard way, "diversity" is liberal code for mandatory "progressive" conformity, and the New Tolerance isn't really tolerant after all.