February 28, 2011
For as long as I can remember California state Democrat Assembly and Senate leaders have long blocked efforts by oil companies to drill off California's central coast. Oil company researchers tell us that there is an estimated 18 billion barrels of oil close to California's coast. Yet for years, Democrats in this state have consistently demonized the industry, discouraging offshore exploration. This coalition of extreme environment-alists and Democrat party allies exist not only in California but elsewhere around the country. 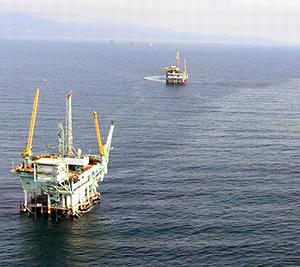 Source: www.ens-newswire.com
US Senate Democrats have consistently blocked oil exploration in Alaska, most notably ANWR (Alaskan National Wildlife Reserve). They point out how exploration will damage the pristine coastal habitat. Environmentalist exploited the issue by describing the area like it was Yosemite National Park. Instead the 2 square mile area the oil industry wants to explore is solid ice tundra (a far cry from how Senate Democrats described the land affected). Polls show that over 77% of Alaskans favor development of the Reserve.

This same story has been played out in other states as well. After the oil well disaster 400+ miles off the Louisiana coast, the Obama administration has yet to allow other oil rigs around the gulf and east coasts to re-start their operations again. Over 36,000 jobs have been impacted by the White House's decision. Why?

The Democrat party prides itself in being the party that represents the little guy. But who does this hurt? In California the federal and state governments

combined make more money (.18 & .34 cents respectively) off the sale of a one gallon of gasoline than the oil producers do. High gas costs hurt middle and lower income earners the most.

Last December a retired Shell Oil executive predicted $5 a gallon gas prices by sometime next year. With the growing uncertainty in the Middle East there is a strong possibility that oil prices could continue to sore. Already in some parts of California, gasoline prices are $4 a gallon. Still, Democrat majority leader — Senator Harry Reid — demonizes the industry calling it "dirty."

Most sensible Americans know that finding other sources of energy is a good thing. However the process of developing green energy will take decades to fully implement and even then, it might only serve ¼ of our energy needs. So why not develop what reserves our country already has? This is why I cannot understand that Obama and his Democratic House and Senate allies continue to shut down and stonewall other sources of energy like coal, gas, shale and nuclear power? We need to use all these sources of American energy so as to avoid dependency on oil from potentially unfriendly regimes in the Middle East and Venezuela.

Why send three-quarters of a trillion dollars overseas in the form of oil exports each year when we could use and develop a variety of energy sources in America? If Obama really wants to spend public money on high speed rail transportation, why doesn't he spend that money on constructing a dozen new nuclear plants instead?

It makes more sense. That's why I encourage you (as consumers) to contact your area's political representatives (whether Congress member, US Senator, state Assembly member or state Senator) and urge them all to put pressure on the White House to open up our energy reserves and other types of American energy resources!

I am convinced that if President Obama continues to resist these efforts (and hold back oil exploration and a variety of energy development), there will be a huge back lash from U.S. voters in 2012. If energy prices continue to increase into 2012, I would not be surprised if the Democrat party looses big during the next election cycle.