April 27, 2012
The recent selection of actress Jane Fonda to play the part of Nancy Reagan in the upcoming film, The Butler, has caused a stir among many conservatives. Nancy's husband: Ronald Reagan, our 40th President, is on record of having a long and well documented reputation of consistency opposing communist ideology and communist regimes around the world. 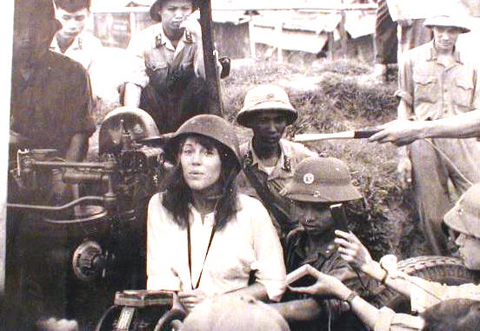 Picking Jane Fonda to play the part of Nancy Reagan by the film's director was certainly a controversial move. Fonda, the daughter of the late Hollywood icon Henry Fonda, will forever be remembered by many as the anti-war activist who visited Hanoi (the Capital of North Vietnam) in July of 1972 during the final stages of the Vietnam War. Author Henry Mark Holzer calls the casting of Fonda to play Nancy Reagan in the film as "a gimmick to tarnish President Reagan's image." He goes on further by saying that "of all the actresses they could pick they (the film's personnel) come up with Jane Fonda... It can't be a coincidence."

Holzer is the author of the book "Aid and Comfort" — Jane Fonda in North Vietnam (www.henrymarkholzer.com ). In the book, he recounts how the North Vietnamese Communist regime used the famous actress's visit as propaganda against the United States and our military. During her visit to Hanoi, Fonda also met with seven U.S. prisoners of war. She was assured by their Communist captors that the prisoners were treated humanely. Sadly, there exist stacks of evidence including many first hand testimonials from released prisoners that state otherwise. While in Hanoi, Fonda was also photographed at the anti-aircraft gun placement that was used to shoot down American planes. The North Vietnamese used these images to promote their regime to the rest of the world.

One former Vietnam War veteran, Jerry Anderson, believes Fonda was "aiding and abetting the enemy" with her well publicized appearance during that summer of 1972. Anderson, the proprietor of a long time California company named Headline Graphics (www.headlinegraphics.com), believes the 74 year old actress sent "the wrong message of appeasement by going there." Anderson had friends who died in combat in the war. He equates Jane Fonda's trip to "an American celebrity going to Germany and meeting with Hitler during World War II."

Perhaps The Butler's Hollywood director Lee Daniels has already anticipated that the Fonda / Reagan controversy would hype interest in the film even before it is made. Maybe it will. Maybe it won't. "Aid and Comfort" author Holzer certainly thinks it will. Holzer is still convinced that the famous actress "committed treason" (in '72) by cooperating with the Communist North Vietnamese government.

In conclusion, it appears that Hollywood and leftist activists will continue to discredit and tarnish the reputation of our 40th President. In my new book, 16 Amazing Stories of Divine Intervention (www.16AmazingStories.com), I try to address this by discussing the President's newly perceived 'mission in life' after his life was miraculously spared during the 1981 assassination attempt on his life by John Hinkley. Hinkley's bullet came within one inch of killing our 40th President. After the attempt, it became clear that Reagan believed he had a new mission on life. He also understood the renewed importance of God in his life too.