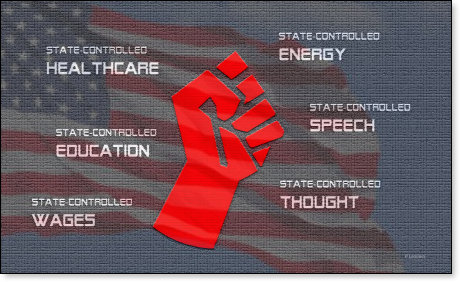 Democrats and Republicans seem to agree on one thing: Bernie Sanders cannot defeat President Trump in the general election. While his raucous crowds and early campaign victories suggest widespread support, a recent Gallup poll confirms that 53 percent of Americans surveyed would not vote for a socialist presidential candidate. It's for that reason, and that reason only, that the Democratic establishment is working hard to end Sander's candidacy and nominate Joe Biden.

Sanders' supporters are young and energized, attracted to the false promise of economic equality and virtually unlimited entitlements. Though not as vocal, his opponents are equally committed. Most of them, especially those who grew up during the Cold War, understand that Sanders' Democratic socialism is just another variation of the socialist ideologies that have failed in so many other countries. Like communism, Marxism, Maoism, and all those other isms, socialism uses envy and victimhood to promote class warfare. That ideology of envy is a concept once foreign to the American people. For people of faith, envy has always been considered a human frailty. It's one of the seven deadly sins, and it's condemned by the Tenth Commandment.

But the country is changing. As it becomes less spiritual, it's becoming more intrigued by socialism. The percentage of Americans who today reject socialism is nearly half the number who opposed it 20 or 25 years ago, when it was universally denounced.

Bernie's defeat would bring some comfort to those who still believe in American values. Some even cautiously predict that it would be a major setback for the socialist movement in America and reassurance that this country still stands for free enterprise and individual rights.

But Bernie Sanders is not the only one nurturing the seeds of envy and class warfare. Several younger, more vibrant disciples have already wormed their way into Congress, and are pushing the same agenda. And the evidence is overwhelming that radical educators continue indoctrinating our young people, teaching them that socialism is somehow superior to capitalism and free enterprise. They're not learning that socialism encourages and perpetuates mediocrity, or that it doesn't empower the people. It takes power away from them and gives it to government bureaucrats.

And the Democratic Party, itself, began embracing the principles of socialism years before Bernie Sanders became a household word. Interestingly, in the presidential campaign of 2000, wealth disparity was not a major issue for Democrats. The term "wealth" was mentioned in their political platform only once that year. But in 2008, the country elected a president who was committed to fundamentally transforming America, in large part through the redistribution of wealth. After eight years, that may be his singular "achievement." If he didn't transform the country, he clearly changed the Democratic Party by showing it how to envy the wealthy. The 2012 platform of the Democratic Party mentioned "wealth" derisively 16 times.

Today, while President Trump vows that America "will never be a socialist country," Democrats see things differently. Asked about Sanders' candidacy, Nancy Pelosi replied that "whoever the nominee is...we will wholeheartedly support." In fact, the same Gallup poll previously cited shows that 76 percent of Democrats would support a socialist nominee for president.

That comes as no surprise, considering their relentless shift towards socialism over the years. In fact, here are three crucial issues on which the Democratic Party once shared traditional values, but are now in virtual lockstep with the Socialist Party USA.

The formula for success in America has always been simple: work and sacrifice equals success and wealth. Opportunity is unlimited for those who work hard and make the necessary sacrifices.

The Socialist Party USA and the Democratic Party demand economic equality. They would confiscate the wealth from those who've earned it, those who have grown our economy, and distribute it to others, including those who have contributed little or nothing to our society.

Most Americans believe, and have always believed that life of an innocent, unborn child is no less important than the life of the mother.

Democrats have joined the Socialist Party USA in dismissing all rights of unborn children, including the right to live. They demand unlimited access to unrestricted abortion at any stage in pregnancy, and expect taxpayers, including those morally opposed, to pay for it.

President Reagan's Shining City on a Hill would vanish under the Socialist Party USA concept of open borders. Our Constitution would become meaningless as America is absorbed into their new world order. And though the Democratic Party itself is not yet openly calling for the elimination of international borders, many Democrats are. Their sanctuary cities, their opposition to the border wall, and to immigration enforcement, and the economic enticements they offer to illegal aliens make it clear that open borders is their ultimate goal.

With or without Bernie Sanders, socialism is not going away, and as the Democratic party continues to evolve, it will soon be indistinguishable from the Socialist Party USA.

It's been said that in a democracy, the people get the government they deserve. If the people want socialism, they need only support the next Democratic presidential candidate, whether it's Sanders or not.