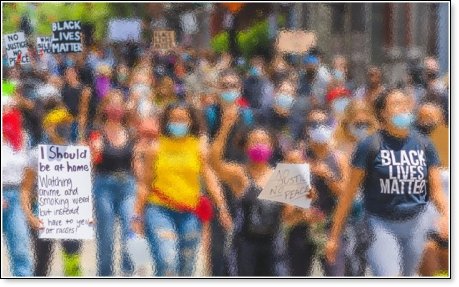 Watching the news coverage of the ongoing riots, I couldn’t help notice a couple of things. First, was the anger, the feral vitriol directed at the police on the scene. It was apparent in the faces and the actions of the rioters and in the signs scattered about, hateful signs like, “Blue Lives Murder,” and “Good Cops Are Dead Cops.”

That mindless hatred seemed strange, coming from those who claimed to be standing for noble causes like justice and fairness. As tragic as George Floyd’s death was, neither the rioters nor the police officers monitoring the unrest had any direct link to the Floyd incident. Yet just like true racists, who hate solely because of skin color, the rioters seemed consumed with hatred simply because of a uniform.

That irony aside, my second observation was the general age of the rioters. The vast majority of them were young, mostly college-age. Many probably are college students. Some may live at home with their parents, or they might be out working, were it not for the coronavirus. It’s probably safe to say that most have had no prior contact with police – except for an occasional speeding ticket or minor drug citation. Yet there they were, cursing and spitting at police officers, while carrying signs calling cops murderers and demanding the elimination of our police departments. This is mob mentality. This is group-think.

The Floyd video was shocking to everyone who watched it. But for those impassioned, impetuous youths, already convinced that racial bias is endemic throughout America’s police departments, it was all that was needed. They may be passionate, and they may be determined, but they’re also clueless.

Whatever they know about police and race relations in America didn’t come from real-world experience. They have none to speak of. It was fed to them by their leftist college professors, using hand-picked statistics combined with isolated incidents of real racism. It came from social media, and it was reinforced by progressive politicians who use racial division for their political advantage. When Minneapolis Mayor Jacob Frey said that Floyd “would be alive today if he were white,” it was pure conjecture, and a cowardly concession to the rioters. It reinforced their misconception, and told them their cause was just.

And they undoubtedly get more reassurance from the manipulators, the radical elements who are always eager to exploit their white guilt, their youthful naïveté, and their nescience.

Most everyone has heard the term, “useful idiots.” It’s used to describe unwitting dupes, manipulated by others to advance a cause or agenda. Since it’s a subjective term, people can decide for themselves if it applies here, but one thing is clear. Radical, anti-American anarchist groups are infiltrating these protests, and their agenda is not racial harmony, but chaos and mayhem.

It’s been said that perception often becomes reality. The relentless propaganda spewed by all those racial antagonists may well be taking hold, solidifying and perpetuating that false perception of institutional racism. There’s a quote often attributed to Joseph Goebbels, “If you tell a lie big enough and keep repeating it, people will eventually come to believe it.” There’s sound evidence that that’s true. Psychologists even have a term for it. It’s called the "illusory truth effect."

Most reasonable Americans still understand that institutional, government-sanctioned racism no longer exists. It ended decades ago with the Civil Rights Act, affirmative action, quota systems, and scores of other government programs designed to help minorities. But we’re not yet in a place where government can control thoughts. The pockets of conscious and subconscious racial bias that still linger can’t be eliminated by protests or riots. They can only dissipate with time. And they will, unless they’re kept alive by those who seek to perpetuate them, with the help of their wide-eyed accomplices.

As to the Floyd incident, so far, no one has yet offered a shred of evidence that Derek Chauvin, the officer responsible for Floyd’s death, was motivated by racial animus. It was clearly an act of police brutality, but, for now at least, we don’t know if Chauvin was poorly trained, grossly incompetent, a bad cop, or an avowed racist.

Every death from police action needs to be thoroughly investigated and, if warranted, charges must be filed, as they have been in this case. But if too many are too eager to look first at the victim’s skin color, racism will never die.