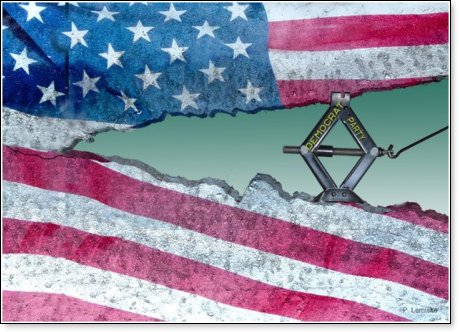 As the Democrat nominee for president, Joe Biden is talking a lot these days about unifying the country. During his acceptance speech, he mentioned the word “unite” at least eight times. He said, “United we can, and will, overcome this season of darkness.” He offered a new path, saying that together we can “take this chance to heal, to be reborn, to unite.” He told us there was only one way forward, “As a united America.”

And he wasted no time telling us who to blame for this “season of darkness,” this deep division in our country. Seventeen seconds into his speech, he complained that “[t]he current president has cloaked America in darkness for much too long. Too much anger. Too much fear. Too much division.”

No one can deny that we’re deeply divided, and it goes without saying that we can’t survive very long with the anger, internal strife, and rioting engulfing our country today. But Joe should be a little more introspective about the real source of that discord.

According to Gallup polling, in 2012 most Americans already saw the nation as divided. But between that year and 2016, the last years of the Obama/Biden administration, the number of Americans who perceived the country as divided rose dramatically from 69 to 77 percent. That division was spread across political, socioeconomic, and racial lines.

It was in 2008 that presidential candidate Barack Obama publicly opined, “…[W]hen you spread the wealth around, it’s good for everybody.” It was the first time in our lifetime that a future president was promoting one of the basic tenets of socialism and introducing Americans to something most of them had never felt – class envy. Only a few years later, a new radical group, Occupy Wall Street, began to attack the very concept of wealth and success. We don’t hear from OWS these days, but its war on wealth lives on through the Democratic Party.

And it wasn’t just socioeconomic division. The gap in race relations also expanded dramatically during the Obama/Biden administration. Another Gallup Poll shows that midway through Obama’s term, 66 percent of blacks agreed that race relations were very good or somewhat good. By 2016, the end of his term, that number had fallen to 49 percent.

President Trump didn’t create those deep divisions. He inherited them.

Today’s Joe Biden – Biden the Unifier – sounded markedly different in 2012, when he told a black audience that Republicans are “gonna put ya’ll back in chains.” It wasn’t an insipid gaff, like the ones plaguing his public appearances today. It was a well-planned, odious metaphor, intended to fuel racial division for political gain.

Today, virtually every politician in the Democratic Party, in local, state, and national politics, works to divide us by perpetuating the false notion that America is stuck in the 1950s, endemically, systemically, and hopelessly racist.

And they’re divisive on so many other fronts. They want rational Americans to feel the same mindless hatred of the president that they themselves feel, so they falsely label him and his allies as racist. Not that long ago, Maxine Waters, a sitting member of the Democrat Congress, stood on street corners calling on American citizens to harass and intimidate associates of the Trump administration wherever they might encounter them. More recently, Democrat Congresswoman Ayanna Pressley publicly called for “unrest in the streets.” These are the Democrat emissaries of "unity."

And a closer look at Biden’s acceptance speech shows he hasn’t really changed. Interspersed with those calls for unity was more of the same divisive rhetoric that worked so well for him during his vice presidency. He dropped the “chains” metaphor, but spoke about the “inequity and injustice that has grown up in America. Economic injustice. Racial injustice. Environmental injustice.” He asked, “Will we be the generation that finally wipes the stain of racism from our national character?”

This is the man who promises to unite our country?

A glance at Joe’s vision confirms that Democrats are really more about identity politics than national unity. Biden offers an agenda for women, for the black, Latino, Jewish, and Muslim-American communities. He has another plan for the Indian-American, Asian American, and Pacific Islander communities. And, complementing his plan for LGBTQ+ Americans, he also has something to offer the Catholic community. Most of his “agenda” is pablum, but it’s his vision of a fragmented America that is the crux of the problem.

Pandering to special interest groups is not what the Founding Fathers had in mind. If Biden and the Democrats simply followed the Constitution, if their plan was to treat all American citizens equally under the laws of the land, they might be taken more seriously as a unifying force.

But perhaps it’s just as well that Democrats are so divisive. It would be disastrous to the country if Americans were to unify behind their new socialist agenda, if we all stood behind their sanctuary cities and open border policies, shared their disdain for police and law enforcement, and embraced their ugly delusion of a fundamentally racist America.

Biden was right about one thing: The only way forward is a united America. But we can never be united as long as civil unrest and chaos ensue every time an arrest goes bad, or there’s another unproven allegation of police misconduct. Racial discrimination ended in America more than 50 years ago. We can only begin to unite if we reject both the notion of perpetual systemic racism and all those divisive and destructive tactics used by calculating, self-serving politicians.