Peter Lemiska
Is there still time to rekindle America’s spirit of pride? 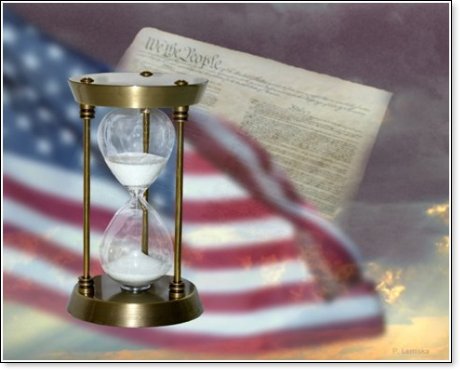 From the beginning, Americans have never seen eye-to-eye on every issue. Long before there were Democrats and Republicans, there were opposing political parties offering contrasting solutions to the problems facing our country. Still, for nearly 250 years, with the exception of four bloody years in the 1860s, those opposing parties shared the American spirit, the same basic ideals, principles, and virtues, the same love of country. Guided by our Constitution, they worked together to create the strongest, most enviable nation in the world.

We were never more divided than during those four tumultuous years of the Civil War. Three years before the start of that war, a relatively unknown Republican was nominated for U.S. senator from Illinois. In his acceptance speech of June 16, 1858, he spoke of the deep divide in our country over slavery. Citing the growing acrimony, he prophetically warned, “In my opinion, it will not cease until a crisis shall have been reached and passed.” Then, borrowing a quotation from the Bible, he added, “A house divided against itself cannot stand.”

Abraham Lincoln was right on both counts. The crisis did come. It took a civil war and an Emancipation Proclamation to end slavery in America. The United States could not have survived by any other outcome.

It’s an unfortunate fact that slavery had been part of colonial America and continued for many years after we declared our independence from England. But by 1862, after just 86 years as an independent country, the scourge of slavery was abolished in America. It was an abomination that had been practiced throughout the world, including among warring tribes in Africa, since the beginning of recorded history.

Still, America had a long way to go. There were issues like segregation, discrimination, and voting rights that still had to be resolved. And there was the lingering bitterness that only time could heal.

It took a few years before former slaves were given the right to vote via the 14th and 15th Amendments, and it took another hundred years for the Voting Rights and Civil Rights Acts to pass in the mid-1960s, finally eliminating all vestiges of government-sanctioned racial discrimination and segregation. Around that time, affirmative action, diversity programs, and quota systems were also introduced, often to the detriment of white Americans. School busing was used to equalize educational opportunities. By the late 1960s and early 1970s, African-Americans were thoroughly integrated into society, and had all the rights, privileges, and opportunities that their white counterparts enjoyed. In fact, today, no racial or ethnic group is excluded from any facet of our society.

Nonetheless, over the past several years, deep division along racial lines has returned. But why?

The main reason is obvious. A string of unrelated African-American deaths at the hands of police has been used by anti-American zealots to “prove” their allegation of "systemic racism." Ignoring the progress we’ve made in race relations, they use those incidents, along with inflammatory rhetoric, skewed statistics, and outright lies, to portray America today as an evil, greedy nation steeped in institutionally enforced perennial racism.

Sadly, their ugly rhetoric has caught on with too many naïve followers, who now share their disdain for America and embrace such self-destructive concepts as white guilt and white privilege. Many are misguided idealists, hungry for another noble quest to champion. Others are anti-American neophytes, eager to put into practice the ideology they learned in class.

They travel from town to town spreading hatred, destroying America’s historic monuments, and inciting riots. Hundreds of them were filmed recently chanting “Death to America” – not in the streets of Iran, but in Oakland, California.

It’s no coincidence that the deterioration in perceived race relations corresponds with a decline in patriotism. The pathetic display in Oakland shows that connection. And it’s demonstrated in football stadiums around the country, where professional athletes now kneel, rather than proudly stand for our national anthem. The two charts below, published by Gallup Polling, graphically illustrate how anti-Americanism is tied to perceived race relations. 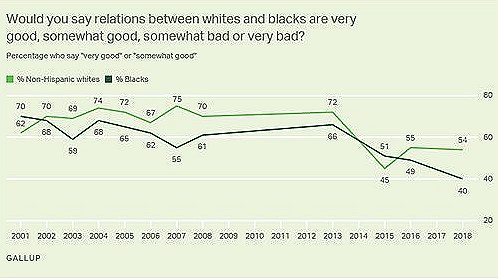 The first chart depicts how Americans see relations between blacks and whites. It’s important to note that it doesn’t reflect actual racial bias, only the perception of race relations. A steep decline began in 2013. 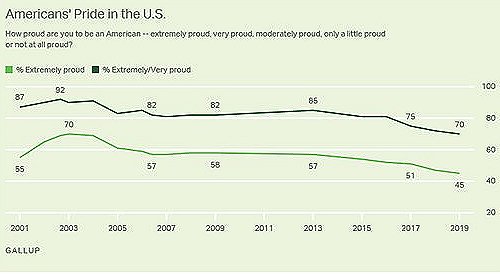 The second chart confirms that patriotism – pride in our country – also began to decline around that time. The relationship is not surprising. After all, how can citizens be proud of a country they see as systemically racist?

And now business executives, bureaucrats, and politicians are also buying in to the propaganda and have come up with a solution to all the racial discord. Their answer is re-education – not re-education of the provocateurs, but of white America. They’re mandating courses aimed at whites – courses in critical race theory, white privilege, and racial sensitivity. Their answer is to accommodate the race-baiting, anti-American zealots, to humble America, to shame our country because of past sins.

One hundred and sixty years ago, America was deeply divided over a real issue. Slavery had to be abolished. Today, systemic racism is just an illusion created by those seeking to divide us and destroy us.

Yet the anger is real. The violence is real. And the division is real. We don’t have an Abraham Lincoln to guide us through this morass, and there’s no hope for one on the horizon. Today, politicians rarely quote the Bible, but those words written in the Gospel of Mark and repeated by Lincoln so many years ago are just as true today. A house divided against itself cannot stand.

Patriotism – pride in America – is the glue that has always held our country together since it began; but self-loathing inevitably leads to self-destruction. Shaming America is not the answer. This violence won’t end with more classes on critical race theory and white privilege. On the contrary, it will only end when enough Americans reject the false notion that systemic racism still exists in our country, along with the false sense of white guilt and self-loathing they may needlessly feel, and again rekindle the pride we all once felt for a country that has accomplished so much, that has done so much to right the wrongs of the past.

Remembering the words of Lincoln, let’s hope we can do that before a crisis is reached.