Peter Lemiska
Is this the face of the new socialist? 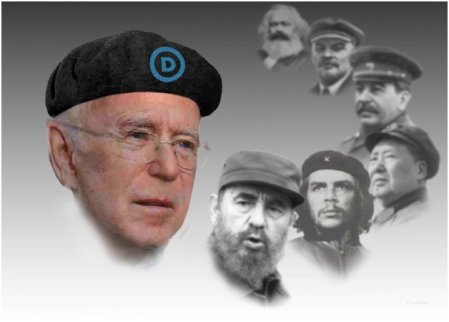 Democrats have spent a lot of time in recent years trying to shake off the label of socialist. Barack Obama used to brush it aside, scoff at it. When Joe Biden was asked about it recently, he answered more directly, boasting, I beat the socialist... Do I look like a socialist? Then, as if to erase any lingering doubts, he added emphatically, Im not a socialist.

But lets not forget that Bernie Sanders, that lifelong dyed-in-the-wool socialist beaten by Biden, came within a hairs breadth of winning the Democrat nomination for president, and that Sanders still enjoys a strong following among Democrats. Considering Joes amorphous political convictions, theres simply no way of knowing where he stands, or how susceptible he would be to pressure from those far-left elements of his party.

Allegations of socialist and communist sympathizers among the Democrat ranks have been swirling around since the McCarthy era. But Obama resurrected the issue in 2008, when he famously remarked, I think when you spread the wealth around, its good for everybody. To many, it raised red flags. He was expressing one of the classic socialist doctrines  the redistribution of wealth, taking from those who work hard and giving to those who dont.

But are the Democrats of today truly socialists?

Of course not, Bidens defenders insist. They argue that Joe Biden has always been a level-headed moderate Democrat, and that besides, even those on the far left of his party dont actually meet the definition of socialist.

One such argument was made recently in an article published in NPR. The article quoted a history and political science professor at Vanderbilt University, Thomas Alan Schwartz, who acknowledges that, "Democrats have tended, through regulation and other ways, to be more empowering of the federal government and in regulating the economy than the Republicans."

But he suggested it was wrong to call that socialism, arguing that socialism is actually a political system in which the state controls the economy and welfare services, and in which "all sorts of other things are in state control, including the large sections of the private economy."

He didnt address Obamacare, which did, in fact, give the state control over one-sixth of our economy, nor the fact that Democrats have no intention of stopping there. If they had their way, the federal government would oversee wages, the environment, education, our law enforcement system, virtually every aspect of our lives. That begins to sound a lot like socialism.

Democrat leaders know that mainstream America still rejects socialism, as well as all its related isms. Most Americans dont really care about the nuanced differences between socialism, Communism, Marxism, Leninism, and Maoism. They learned a long time ago that, in the end, all those ideologies are antithetical to the American way of life, that they abhor the freedom guaranteed to Americans by our Constitution, and that, while promising power to the people, instead they only expand the power of the state, often through violence and revolution.

The author of that NPR article reassured his readers that Bidens history establishes him as a moderate and a pragmatist, He added that Biden supports neither of the major socialist programs being pushed by the far leftthe Green New Deal and Medicare for all.

But its Bidens pragmatism that almost assures a shift to his left. He knows he needs those vast numbers of Sanders supporters, and he has to give them something for it. While he tells us that the socialist has been beaten, we know that Bernie may be gone but hes not forgotten.

Ultimately, we dont need to understand the academic definition of socialism. We just need to defend our own freedom and independence from radical politicians and their false promises of power to the people.