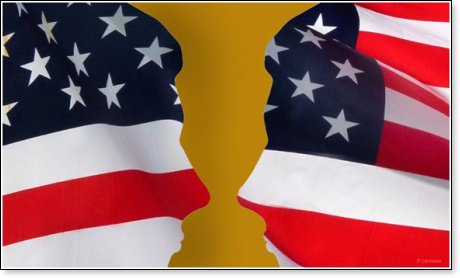 Many are calling the upcoming election the most important in our history. The two presidential candidates in this election clearly have diametrically opposing views of our country, the problems we face, and the solutions they offer. It’s like those classic optical illusions, where two people looking at the exact same image perceive entirely different things.

Joe Biden sees a deeply flawed America, a country inflicted with systemic racism and inherently unfair economic policies. He sees a profoundly biased judicial system and law enforcement apparatus. Like Barack Obama and most Democrats, he invariably sees racial bias every time a person of color is injured or killed during police confrontations. But he only sees what the radical left allows him to see. He ignores a couple of basic facts: To keep our streets safe, police must prepare themselves to engage dangerous criminals of all races; and most of those confrontations leading to injury or death involve, not innocent bystanders, but criminal suspects. He also ignores research studies like the one at Michigan State University, discrediting the claim that black citizens are more likely than others to be shot by white officers.

Coached by the radical left, Biden also sees a country infested with right-wing hate groups. He talks about neo-Nazis and Klansmen with bulging veins and torches, spewing anti-Semitic bile. It’s an ugly picture, but how many American monuments have they torn down lately? How many riots have they spawned? And what about the anti-police bile spewed by the Marxist group Black Lives Matter? Wasn’t it that group, together with Antifa, that was responsible for the rioting and resulting police injuries, deaths, and more than a billion dollars in damage?

Biden doesn’t see any of that, but he does see a country without borders, one that invites in all immigrants, legal and illegal, law-abiding and lawless, one that extends to all of them the very same healthcare, educational benefits, job opportunities, and welfare programs intended for American citizens, funded by American taxpayers.

And he sees a welfare state, in which all people, from cradle to tomb, depend on the government for their very survival. And since the price for that promise of security is absolute compliance, Biden knows there would be little resistance if he decided to lock down the entire country in the name of public health, even if it completely destroyed our economy.

Even more troubling than all of that, though, is Biden’s vision of a government powerful enough to destroy political opponents.

The disdain for our country that Joe Biden and the Democrats feel is routinely exposed when they speak directly to the public. Debasing rebukes like “That’s not who we are,” and “We can do better,” may be music to the ears of woke Americans burdened by white guilt, but it’s wearing thin on everyone else. Maybe it’s just a clever campaign tactic. Maybe they’re hoping voters will put them in office just to silence those condescending admonitions and end the annoying tongue-clicking.

As Biden shifts his perspective further to the left, his perception of America continues to change. When he recently echoed Barack Obama’s vow to “fundamentally” transform our country, no one asked him what it was that needed to be fundamentally changed. Was he talking about reimagining our police departments? Did he mean packing the Supreme Court? Was he talking about transforming America from a free market to a socialist society? Exactly what needs to be fundamentally transformed in a country that has come so far and achieved so much in its 244 years of existence?

We can only guess at the answer to that, but it’s clear that Trump sees things differently.

President Trump sees a rich and virtuous country, a country that may not be perfect, but is proud of its military strength and its contributions to defeating the forces of evil in two world wars, proud of its accomplishments in technology and in medicine, and, yes, proud of its advances in civil rights.

He sees a free and independent people with liberties guaranteed by our Constitution. As a leader, he’s mindful of the Constitution as he battles the current pandemic, balancing our freedom against the advice of the medical professionals and in view of the economic health of our country.

President Trump sees a country that welcomes immigrants who share American values and who enter our country through a well-established legal process.

He looks across our country and sees the same thing our Founders saw, the same thing most Americas have always seen – opportunity, freedom, and fairness.

And there’s one more stark difference in perception between by the two candidates. Where President Trump sees a land of opportunity for all, Joe Biden sees a goldmine for Hunter and the Biden family.