Peter Lemiska
For the Democrat Party, ignorance is not bliss – it’s essential 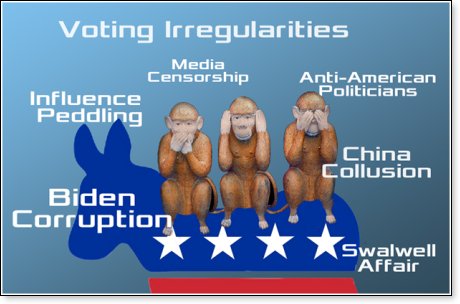 In a recent post-election survey, 1,750 Biden voters in seven swing states were asked about various significant news events leading up to the election. They included, among other issues, the sexual assault allegation against Joe Biden from an incident in 1993, the financial scandal involving Joe and Hunter Biden, and the far-left ideology of Biden’s running mate, Kamala Harris. Shockingly, 82 percent of those surveyed were unaware of at least one of the issues in the study. More shocking is that 17 percent of those Biden voters now say they would have abandoned the Democratic candidate – if only they had known.

It’s a bitter irony for Trump supporters, who are already convinced that the election was stolen, that those uninformed voters might have changed the outcome of the election if only they had paid closer attention. Oh well.

There is, in fact, overwhelming evidence that the news and social media lean far to the left and have been using the insidious tools of propaganda – slanted and distorted news stories, censorship, and outright lies to help Democrats.

But most Democrats don’t need help from the media. They’ve developed an uncanny knack for ignoring or dismissing news stories they don’t like. They’ve learned to close their eyes, cover their ears, and wait for things to blow over. It seems to work pretty well for them. After all, when was the last time a Democrat politician was held accountable for betraying the trust of the people? Even Bill Clinton’s well-established charges of perjury and obstruction of justice in 1998 went nowhere.

That scandal aside, Democrats have learned that it’s much easier to ignore or dismiss allegations of misconduct, rather than refute them. They even have a list of standard diversionary responses to help them remain uninformed:

And since none of their go-to responses actually disprove the allegations or shed any light whatsoever on them, we can borrow from a term used in psychology and identify them as ignorance defense mechanisms.

When then Secretary of State Hillary Clinton jeopardized national security by sending official communications over an illegal private server, Democrats dismissed it as meaningless – nothing but a political smear campaign. They covered her tracks with a three-year-long investigation of her political opponent.

And after Vice President Biden’s ne’er-do-well son used his connections to rake in millions of dollars from foreign countries, some hostile to America, Democrats were quick to say it had all been debunked – without knowing, or caring to know who “debunked” it, or how it was “debunked.” They also had no interest in learning what was offered in exchange for those millions. Instead, they impeached the man who did want to know those things. It’s recently been confirmed that Hunter Biden has actually been under federal criminal investigation since 2018, an investigation that will certainly come to an end if Joe takes yet another oath to protect and defend the Constitution.

And it’s not just the upper echelons of government.

There’s the sanctimonious Eric Swalwell, the California Democrat who sits on the House Committee on Intelligence, no less. For years, he was a relentless provocateur, pushing the Trump/Putin collusion theory. So most were flabbergasted to learn of his history of cavorting with a Chinese spy, who actually helped him win his election. None of the ignorance defense mechanisms apply here, so Democrats are simply closing ranks, waiting for it to go away.

And there’s the case of Ilhan Omar, the Somali refugee who brought her anti-Semitism, anti-Americanism, and third-world corruption with her to congress. Democrats are blind to the credible allegations of marriage fraud that allowed her into the country, and to the $1.6 million funneled from her campaign contributions to a consulting group owned by her husband. For Omar, America truly is a land of opportunity.

But perhaps it’s the Democrats’ willful blindness to election fraud that is most troubling. This is not the first time that election fraud has come up. The Heritage Foundation has documented more than 1,100 cases that resulted in prosecution. The impromptu, illegal changes to election laws, and mail-in ballots clearly helped facilitate fraud. That was confirmed by the hundreds of affidavits alleging irregularities and by the irrefutable evidence of fraud following the election – ballots cast by deceased voters, voters learning that their ballot had been cast without their knowledge. Considering all of that, even the most clueless Democrats know that election fraud is real. For obvious reasons, they’d rather not know the extent of it, so when citizens express concerns, they’re labeled right-wing conspiracy nuts. Whatever their beliefs, until every one of those allegations is actually investigated and not summarily dismissed, the true outcome of this election and all future elections will always be in question – will, in fact, be rejected by millions of Americans.

It’s been said that ignorance is bliss. For Democrats, it’s absolutely essential.

By ignoring selected instances of gross misconduct, Democrats are allowing corruption to flourish. Aided by a sympathetic media, it’s certain to grow like a cancer until America becomes indistinguishable from the corrupt, despotic regimes it has opposed throughout its history. Sadly, some would say it’s already there.